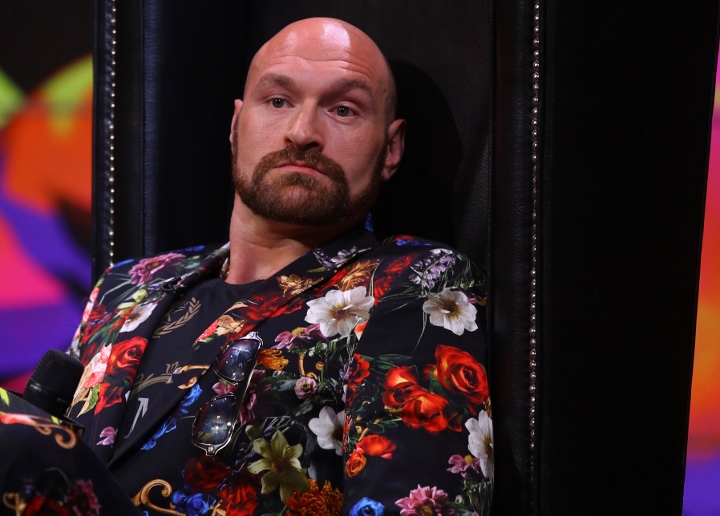 Negotiations for the heavyweight championship unification bout between Tyson Fury and Anthony Joshua have gained serious momentum of late for a summertime showdown.

Fury, however, has decided to pour ice-cold water over steam the potential super fight had.

“Whatever they say is very unimportant to me because, until I have a fight date and a hell-of-a-lot of money in my pocket, there is no fight,” Fury told IFL on Thursday. “Will I be fighting Joshua in the next ten minutes? No. Do I think the fight will eventually happen? Yes, it has to happen. Do I think it is next or imminent? No. I’m not going to hold my breath for it, that’s for sure. We’ve seen how long Mayweather and Pacquiao went [before they fought].”

In recent weeks, Matchroom Boxing head Eddie Hearn, who promotes the WBO, WBA, IBF and IBO champion Joshua (24-1, 22 KOs), and Top Rank boss Bob Arum, who co-promotes the WBC titlist Fury (30-0-1, 21 KOs), have both been bullish that a deal will be finalized soon, and that all of the critical elements of the fight have been squared away.

Fury didn’t sound too enthusiastic, regardless of the developments.

“I’m not going to put all my eggs in one basket because I have been guilty of doing that before and, when the fight doesn’t happen, that is when I end up in a massive depression and feel like killing myself,” he said. “I’m not going to say ‘it is definitely happening in June or July.’

“There’s a lot of things going on that people don’t know about behind the scenes that can scupper the fight. We’re nowhere near that at the moment. I have two fights this year and I don’t give a f*** if they’re with Joe Blow, Fred Flintstone, Mike Tyson, anybody. I just want to fight this year.”

Fury’s camp has long maintained that a forthcoming third fight with Deontay Wilder (42-1-1, 41 KOs) is out of the question.

“Don’t write off Deontay Wilder out of the equation, he could be fighting me next, who knows?” said Fury. “I could have a trilogy with Wilder yet. There’s a lot of stuff going on behind the scenes and Wilder might be next, who knows?”

Fury has been forced to sit on the sidelines after the Wilder win in February 2020. Co-promoter Frank Warren told Talk Sport on Thursday that he’s noticed his fighter’s growing level of exasperation.

“Nobody is more frustrated than the fighters and us, we’ve worked like you cannot believe to get this over the line,” said Warren. “I think Tyson is a bit peed off about it because it’s dragging on and on and on. What I can say is that everything is agreed, it’s an imminent announcement and we’ve got to work on a site, and that’s it.”

Warren signed off with an optimistic update.

“It’s absolutely moving in the right direction and everybody is on the same page. Hopefully everybody will be getting the good news soon. The contracts are agreed and they will be signed, 100%, I’m confident of that,” he said.