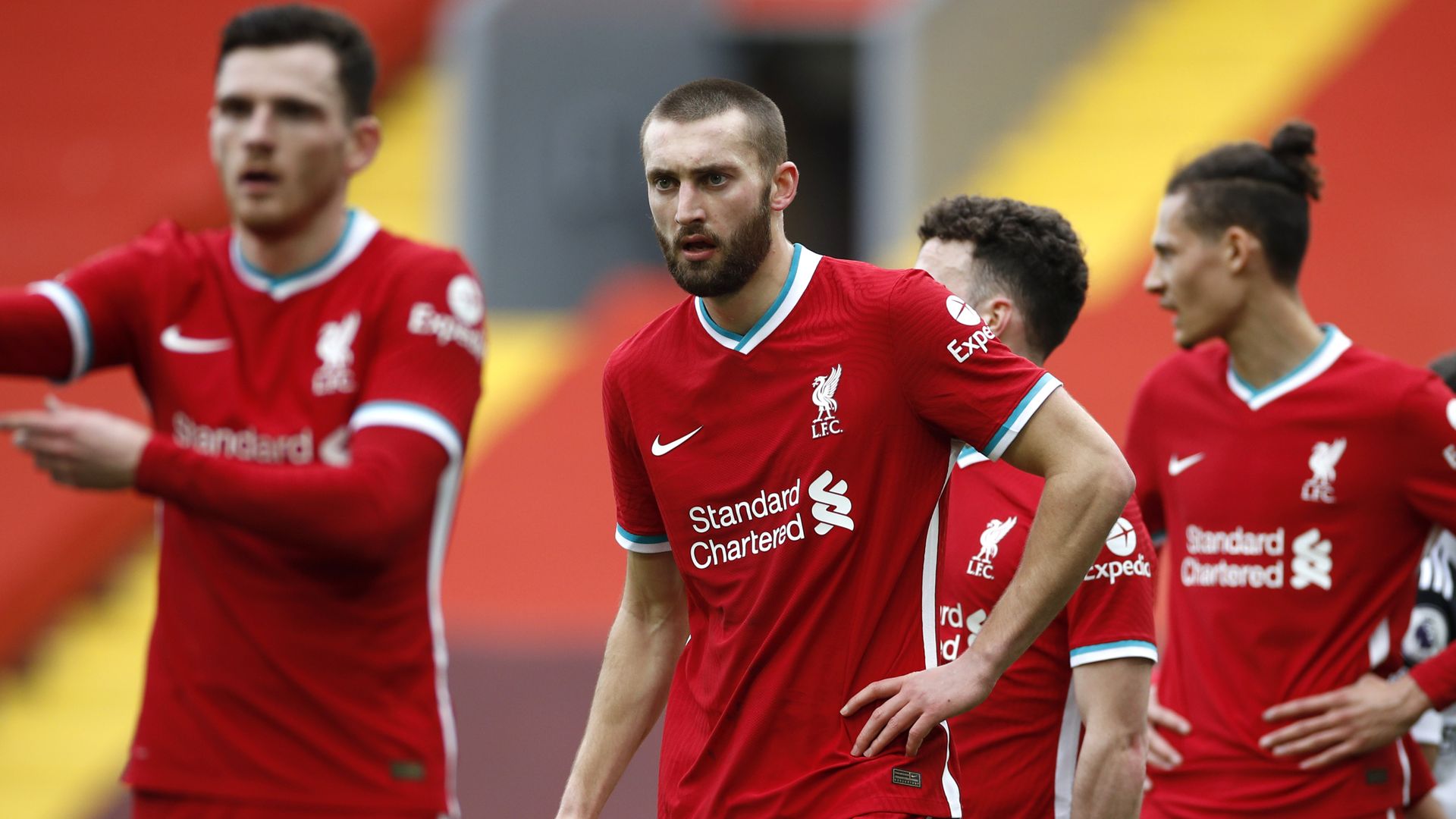 In his latest Sky Sports column, Paul Merson says Liverpool’s sixth consecutive home league defeat didn’t come as a shock to him, believing that Jurgen Klopp has stuck too stubbornly to his preferred system at a time of crisis.

Liverpool’s capitulation as champions stooped to an unprecedented low as Fulham boosted their survival hopes with a 1-0 win at Anfield on Sunday.

And in his latest column, Merson has labelled the recent form as “embarrassing”, claiming Klopp needed to protect the players with a shift in formation to help bring about a change in fortunes…

This is hard to say but I think Jurgen Klopp has been a bit blinkered at Liverpool.

It really is hard to say because he is a really top manager, but when you look at their situation, you’ve got Robertson and Alexander-Arnold, who are two of the best attacking full-backs in the country and they are up there as two of the best in the world too. There is no doubt about that. You only have to look at their assists and their crossing.

But, at the moment, they haven’t got the personnel in defence to keep things tight. If Van Dijk and Gomez aren’t there, Liverpool’s centre-backs aren’t good enough. That screams at me that they needed to switch to a back three.

That would give you bit more protection and it would just change things up a bit. However, he stuck with 4-3-3 time and time again, and they’ve been exposed.

‘Fulham defeat not a shock’

Honestly, the Fulham result wasn’t a shock to me.

The way Liverpool are at the moment, they are all over the place. They can’t defend and they are letting in too many goals, and Klopp should have been able to take a step back and seen the need to change things up, play three at the back and be fair to the players who have filled in in defence like Jordan Henderson, Fabinho, Nat Phillips and Ozan Kabak, who only arrived in January.

You have to give them the best possible chance and give them a little bit of protection. The full-backs love bombing on so straight away you know there are going to be times when you are isolated during a game. At the moment, with no Henderson or Fabhino in midfield, there’s only James Milner to win the ball back.

It all points to changing things up and giving the defence the best possible chance, but he’s just stuck with the same old thing and they’ve been found out.

The manager needs to take a look at himself and ask if he should’ve made a change? It doesn’t matter if you don’t believe in something like three at the back or never used it throughout your career because that’s not the point.

He needed to protect the players and try and get results. You can’t just keep putting the same team out in the same formation and say: ‘We are Liverpool. I’ve got three forwards who are going to score goals for fun like they have over the last year or two years.’

They haven’t done that, so you have to change and tighten up at the back. I can’t emphasise it enough, he could have easily gone with three at the back to stop this rot and give them protection.

I just can’t see why he hasn’t done it.

‘Players now need to step up’

It’s not been good at all. I’ve just asked a few questions of the manager there but I think the players have got to take some responsibility too.

I’ve said all along that they’ve had some big injuries. It’s been a tough season in that respect for Klopp and his side. They’ve lost a Rolls Royce of a centre-half in Van Dijk, they lost his partner in Gomez and they’ve lost numerous others along the way, but it’s gone too far now.

They are at Liverpool to perform and not feel sorry for themselves because of injuries. If they want to play for Liverpool, you cannot just wait and rely on Van Dijk coming back. You cannot keep hiding behind Van Dijk’s injury.

I would go as far as to say losing six home games on the trot is pretty embarrassing.

‘Everything is going right for Chelsea and Tuchel’

Everything is going right for Chelsea and Thomas Tuchel, at the moment.

They’ve had two big results against Liverpool and Everton to continue what has been an unbelievable run and full credit has to go to Tuchel.

They were a real handful against Everton, and Kai Havertz epitomised that. We finally saw his best on Monday, he was simply outstanding. I didn’t realise how quick he was! He was a real handful and the decision to bring him in last night was rewarded.

When you are winning every week that’s what happens.

The problems he has now is Havertz just had his best game for Chelsea by a million miles, but I’d be surprised if he plays next week. Mason Mount was outstanding against Liverpool but then he didn’t play against Everton.

The one problem I still see is that they don’t score a lot of goals. For all the game they had against Everton, I thought it was a game where they probably could have blown the opposition away. Some of the passing and some of the movement was outstanding.

I really like the manager. He looks really good and has made a really impressive start at Stamford Bridge.

‘Back three obvious for Chelsea’

If there was one team in the country that could play with a back three, I thought it was Chelsea.

They have actually got wing-backs rather than just full-backs, if I’m being honest, and the switch has worked a treat.

If you look at Liverpool at the moment, it’s probably the way they should have gone. When you look back at it now, Jurgen Klopp should have been a bit more flexible and thought we don’t really have good defenders without Virgil van Dijk and Joe Gomez. Maybe he should have been flexible and switched to a back three to give the players a bit more protection and also, they have wing-backs too in Andrew Robertson and Trent Alexander-Arnold, who like to go forward more than they do defending as well.

Tuchel has come in and spotted that at Chelsea, and Klopp could have learnt a bit of a lesson from that.

Chelsea have been outstanding. Whoever has played in midfield out of Matteo Kovacic, N’Golo Kante and Jorginho has been superb. Everyone who has played has been a nine out of 10 since Tuchel’s arrival.

The problem is if they dip to a seven or a six out of 10, how does he react? What does he do then?

‘Chelsea in pole position, but job not done’

Chelsea are now in pole position to finish in the top four after a big week of results, but it is not a foregone conclusion. They have to keep producing right until the end of the season.

There are not too many concerns about injuries at the moment. They have a really good squad and we’ve seen it utilised in the last few weeks by Tuchel. Kante and Mount were rested on Monday, Olivier Giroud is on the bench too and Tammy Abraham is not even getting a look in.

It’s far from job done, though. They need to keep this run going because we’ve already seen this season that things can change very quickly.

West Ham keep winning and Tottenham are flying again. It’s lucky Chelsea have been on this brilliant run and are in the position they are in because otherwise, they’d have been out of it.

‘A+ for perfect Tuchel’

It’s a big advantage for Tuchel that the players he’s bringing in when he’s rotating his line-up are performing. He’s rotated all the time and when you look at other teams, their starting line-up picks itself and there isn’t much more to come in.

When you look at Chelsea, he’s constantly changing, but he’s also getting the results. So, no-one is questioning or saying he doesn’t know his best team. When Frank Lampard was doing exactly the same, the team wasn’t winning football matches. It led to questions over what Lampard was doing, but he was only trying to replicate what Tuchel is doing.

You just get away with it when you are winning every week. If they suddenly lose two games on the trot and he’s still changing things, then everyone will turn around again and say he doesn’t know his best team. It’s a really fine line between success and failure.

However, everything Tuchel has done so far has been perfect.

The only slight problem I picked up on was that he should have changed things against Manchester United quicker. United were playing with such a high line against Giroud and I thought the manager should have brought on Werner a bit quicker, using him like they did at Anfield.

Bar that minor detail, he’s been outstanding. If you were a schoolteacher, you’d say A+!