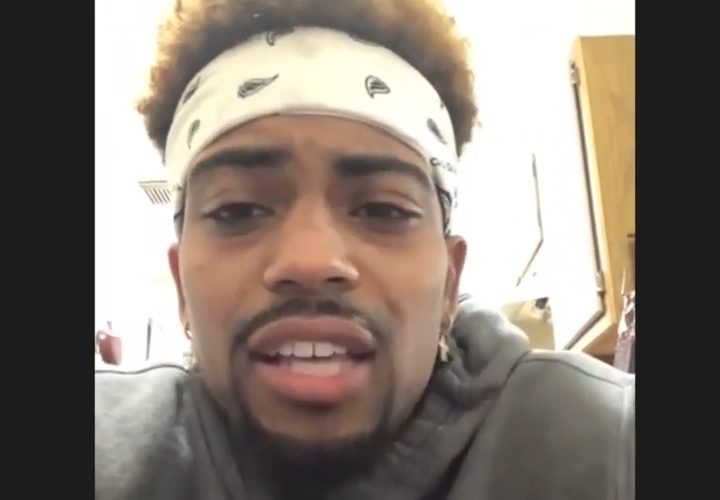 The city of Lafayette, Louisiana has produced a pair of pretty solid mixed martial artists in former UFC champs Daniel Cormier and Dustin Poirier, but in recent years, there hasn’t been much to brag about in the city from the boxing side of the combat sports street.

There was the co-captain of the 1992 U.S. Olympic team, Eric Griffin, and former junior middleweight contender Rodney Jones, but since then, it’s been quiet.

“We’ve got a few good fighters, it’s just that a lot of them wasted their talent,” said Keon Papillion. “There’s a lot of up-and-coming talent coming from the amateurs, too, it’s just that they don’t have that many shows going on right now, so they can’t really get the exposure down here.”

If the last name sounds familiar, it’s because the 23-year-old junior middleweight is the son of former 154-pound contender Jason Papillion of Broussard, a 15-minute drive from Lafayette. And while the younger Papillion could go somewhere with greener pastures to pursue his budding pro career, he’s intent on staying home and putting his city on the boxing map.

“I think about leaving all the time,” he chuckles. “But I prefer to be the first to make a name out of here. It would be a big accomplishment.”

It would be. Winning a world title would also be a chance to put a stamp on the family name in the sport, something dad came close to as a legitimate contender in the late-90s and early-2000s, when he threw hands with the likes of Winky Wright, Kassim Ouma, Bronco McKart, Keith Holmes and Roman Karmazin.

And though Jason Papillion took his knocks over the course of a career in which he compiled a 39-15-2, 1ND record, while also working as one of Roy Jones Jr.’s sparring partners, that education is something he hopes will serve his son well as he navigates the pro waters after a 61-bout stint in the amateurs. At 23, Keon doesn’t remember much of his father’s career, which ended in 2010, but what he does recall is that at home, the fans loved him.

“The crowd was always ecstatic for him, so that’s probably one thing I always remember,” he said.

So dad isn’t the kind of guy to whip out old tapes of himself whenever company’s around?

Even today, with modern technology? There’s no Jason Papillion taking out his smart phone to YouTube himself?

“Trust me, he’s been there before, too.”

But it’s clearly not a constant, obnoxious thing. What Keon will say, though, is that when he was young, his father clearly wanted him to follow in the family business.

“I don’t want to say I was drafted,” he laughs. “But at first, I was kinda forced to do it and I didn’t really like it at the time as a young kid. My first love was probably basketball, but I started playing every other sport and I just wouldn’t get the same attention and spotlight like I wanted, and it kinda drew me back into boxing because my dad was a professional fighter.”

With the last name of a local hero, Papillion was going to get the spotlight he wanted, but it wasn’t until he gave his father an unusual birthday gift that the die was cast for the teenager.

“I sparred my dad for his birthday,” he said. “I just wanted to. I couldn’t really think of a gift, and I kinda got brought back into it like that.”

I warned you that it was an unusual gift, but dad was impressed.

“He was impressed because I decided to stay in the gym after we sparred,” said Keon, who estimates he was around 12 or 13 at the time. But did he take it easy on his father?

“It was the other way around.”

No one was taking it easy on him in the amateurs, though, as beating an opponent with the last name Papillion in Louisiana was a big deal. But by the time Keon hung up the amateur gloves to go into the pros, he had earned his respect.

“I felt that (people were gunning for me) more in the amateurs when I first started, but now pretty much everybody loves me and loves to be around me,” he said. “I don’t really hear people wanting to get in there with me no more like they used to when I was in the amateurs and was first starting.”

This is a whole new ballgame, though, and while he’s marched out to a 3-0 record with two knockouts, once the level of competition rises and he starts getting some press and network attention, the target will likely return to his back.

“I love that,” he said. “Competition brings out the best in me.”

Fresh from a first-round win over Jarol Diaz in February, Papillion hopes to be back in the ring in April or May, and as far as his road to the top, he has no problem taking the scenic route.

“Everybody has their own time, so I pretty much just focus on myself and improve as much as I can improve and just beat whoever they put in front of me,” he said.

And in the meantime, it’s early mornings, late nights and plenty of hard work, Lafayette style.

“Better than anything, I like to improve myself,” Papillion said. “I feel like getting up very early, training three to four times a day and staying very late is why I feel like I’m getting more progress in than other people, and it gives me a mental advantage over them. I don’t think nobody is getting up and training that much.”