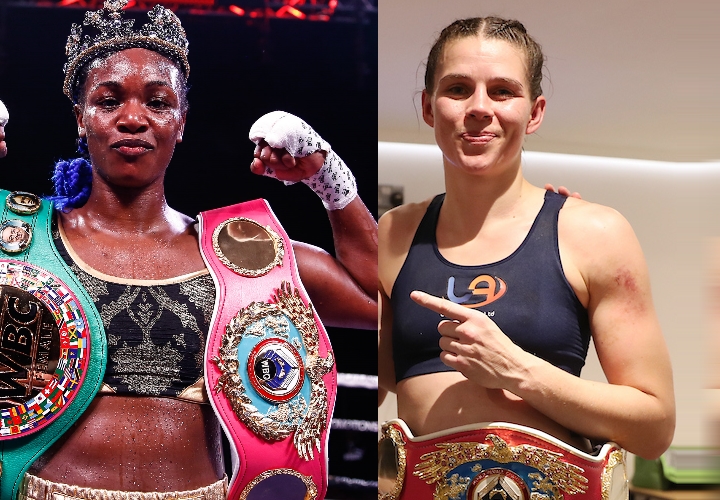 There is only one fight, according to Eddie Hearn, that makes any sense for Claressa Shields to take next.

Hearn hopes Shields’ handlers agree to the two-fight deal he has suggested for the unbeaten three-division champion to face Savannah Marshall, the only opponent to defeat Shields as an amateur or professional. The 25-year-old Shields (11-0, 2 KOs) has not lost since Marshall out-pointed her, 14-8, at the AIBA World Boxing Championships in May 2012, three months before Shields won the first of her two Olympic gold medals.

Shields ridiculed the previous offer Hearn, Marshall’s promoter, made for her to battle Marshall during a post-fight interview Friday night following her 10-round, unanimous-decision victory over previously unbeaten Marie-Eve Dicaire (17-1, 0 KOs) in their 154-pound title unification fight in Flint, Michigan, Shields’ hometown. The outspoken Shields stated Hearn offered her an unacceptable $250,000 to fight Marshall (9-0, 7 KOs), who since has won a vacant version of the WBO middleweight title Shields once held.

“I have to say I believe 300 [thousand] was the offer that we made for her to fight Savannah Marshall,” Hearn revealed during his most recent appearance on “The Ak & Barak Show,” which streams weekdays on DAZN and SiriusXM. “I mean, I’m guessing [it’s] probably three times more than she got last [Friday night]. But I love Claressa Shields. I think she’s great. I mean, the only thing is with Claressa, I feel like she’s isolated herself away from some people and some networks, because she’s so outspoken.

“I love that. I don’t have a problem with that. I think you have to speak up for what you believe in. All right? But because of that spirit or attitude or whatever you wanna call it, people like Showtime have obviously turned their back on her, all right? And that was the main outlet for her to fight. So, for me, I would love to bring her over to Matchroom and DAZN.”

Hearn has contacted Shields’ manager, Mark Taffet, and her promoter, Dmitriy Salita, regarding a two-fight deal for Shields to fight Marshall.

England’s Marshall (9-0, 7 KOs) would need to win her next fight April 10 to remain in contention to oppose Shields later this year. The 29-year-old Marshall’s opponent for that bout hasn’t been announced.

“I keep reaching out to Mark Taffet and those guys and keep trying to push conversations forward,” Hearn explained. “They haven’t been that quick in coming back. They have been responding, but I’m saying to them now, we should do two fights with Marshall. Really, Marshall is the only fight for Shields, all right? She beat her in the amateurs. Marshall beat Shields in the amateurs. She’s a world champion at middleweight. It’s a tremendous fight. So, why don’t we do a two-fight deal where Claressa Shields fights Savannah Marshall twice. Once in the UK, once in America, in whatever order we work out, all right?

“It’s a tremendous fight. They’re both capable of winning that fight. Claressa won’t like this – I really believe Savannah Marshall stops her. She’s a really, really special fighter. She’s fighting again on April 10th. Let’s see how she gets on. She’s still at a much earlier stage in her professional journey than Claressa, but we’re ready to take that fight now. That’s a super fight for women’s boxing. And hopefully her team gets back to me, and we can wrap it up.”