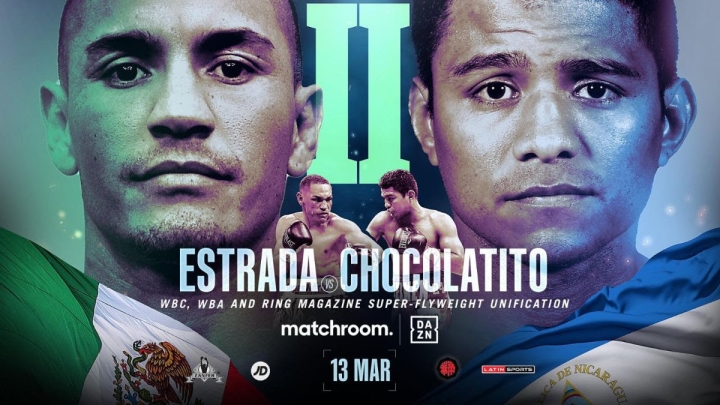 Four neutral officials have been assigned to work one of the biggest fights on the current boxing calendar.

Puerto Rico’s Luis Pabón has been tabbed to serve as third man for this weekend’s rematch between Juan Francisco Estrada and Roman ‘Chocolatito’ Gonzalez. The World junior bantamweight championship and WBA/WBC titles are at stake in their DAZN-streamed headliner this Saturday from American Airlines Center in Dallas, Texas.

Of the group, only Pabón and Sutherland have minimal experience working with Gonzalez (50-2, 41KOs). None of the four assigned officials have previously worked a bout involving Estrada (41-3, 28KOs).

Pabón was the referee for Gonzalez’s WBA junior bantamweight title winning effort over unbeaten Kal Yafai, with the Nicaraguan ring legend—who has won titles in four weight divisions—scoring a 9th round stoppage to become a two-time titlist at the weight.

The selection of Pabón as referee for this weekend’s bout will undoubtedly generate a collective groan. The 54-year-old official from San Juan, Puerto Rico has, however, managed to avoid controversy in recent years and has even regularly conducted training seminars. His last worked title fight of sorts came last Halloween, when Pabón served as the third man for secondary WBA junior welterweight titlist Mario Barrios’ 6th round knockout of Ryan Karl in San Antonio.

Sutherland has worked just one previous bout involving Gonzalez, coming in a May 2015 World flyweight championship defense versus Edgar Sosa. Gonzalez gave the judges an easy night’s work, scoring a 2nd round stoppage in the second defense of his flyweight crown at The Forum in Inglewood, California.

Judges Sucre and Reyes both work for the first time involving either boxer. The locally-based Reyes comes in with years of experience, including his having worked the July 2019 junior welterweight title unification clash between Jose Ramirez and Maurice Hooker. Reyes scored the contest 47-47 at the time of Ramirez’s 6th round stoppage to unify the WBC and WBO 140-pound title.

Saturday’s rematch comes more than eight years after Gonzalez and Estrada first met in a junior flyweight title fight in Nov. 2012. Managua’s Gonzalez scored a 12-round unanimous decision, winning by scores of 118-110, 116-112 and 116-112 to make the fifth and final defense of his 108-pound title before moving up in weight.

Estrada, 30, went on to become a two-division champion. The fighting pride of Hermosillo, Mexico won the unified flyweight crown in his very next fight, outpointing Brian Viloria in April 2013. More than six years later came his second title reign, claiming the WBC junior bantamweight strap and lineal championship in a 12-round win over Srisaket Sor Rungvisai in their April 2019 rematch.

The judges and referees have also been assigned for the other two title fights on the show.

The women’s undisputed welterweight championship rematch between Jessica McCaskill and Cecilia Braekhus will also feature Martinez-Rizzo as a judge. She is joined by Javier Alvarez (Texas) and Chris Tellez (New Mexico) for the scheduled 10-round fight, with Texas’ Rafael Ramos to serve as the referee.