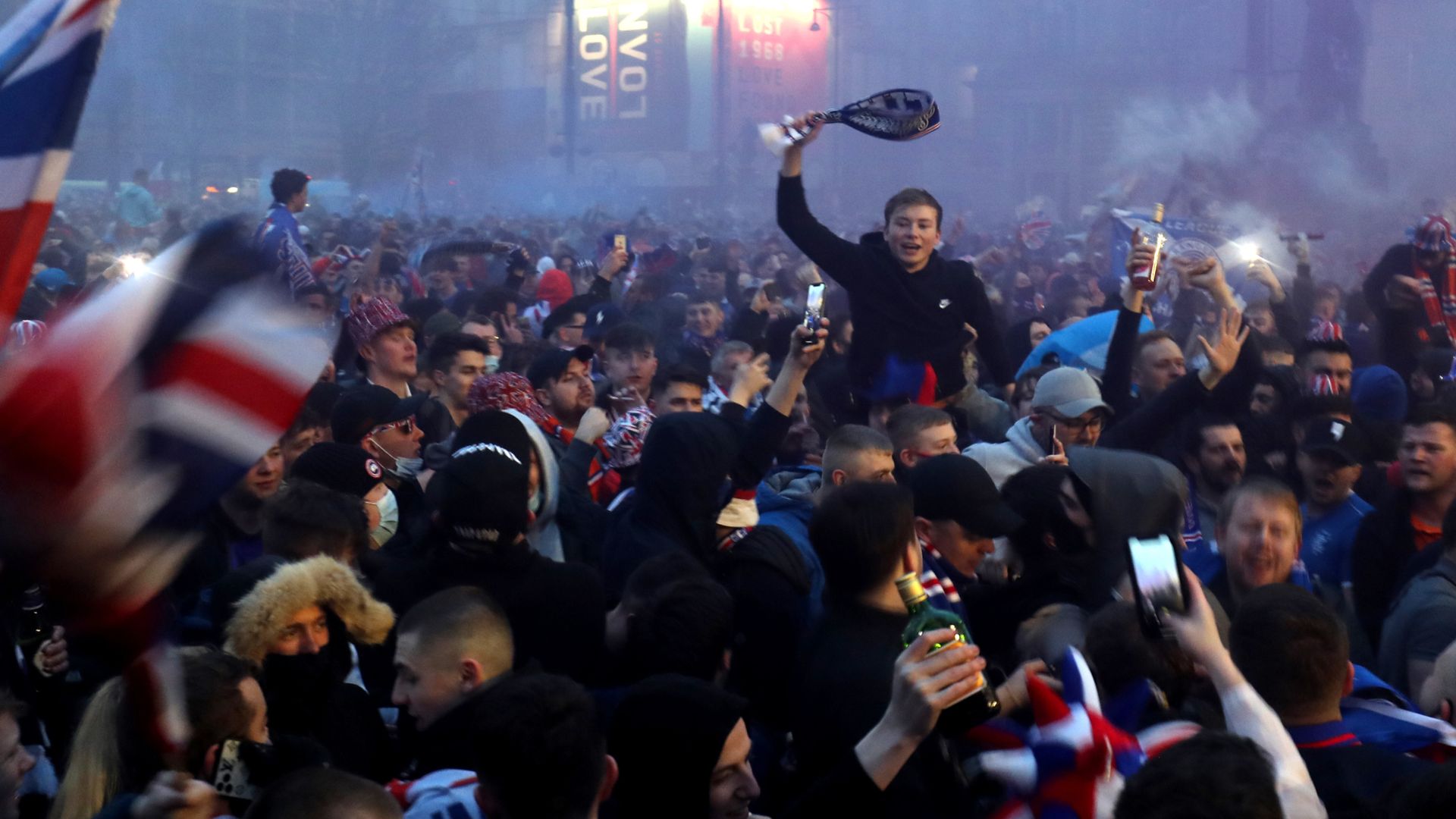 Former Rangers captain Richard Gough has dismissed suggestions that the Scottish Government could call off this month’s Old Firm game as “crazy talk”.

On Tuesday, First Minister Nicola Sturgeon threatened the continuation of elite sport after thousands of Rangers supporters gathered to celebrate their side’s title win on Sunday.

She added that the Government will speak with “certain football clubs” as well as the game’s authorities before reporting back ahead of the Celtic vs Rangers match at Parkhead on March 21.

However, Gough, who captained the famous Rangers side that won nine consecutive league titles between 1989 and 1997, says newspaper reports that suggest the Old Firm game later this month is now in doubt as a result are out of proportion, telling Sky Sports News: “That’s crazy talk.”

However, he did urge both sets of fans to stay away from the game and respect lockdown rules, saying: “I’m sure our club will be telling our supporters, ‘stay indoors, there’s no use going down to Celtic Park’.

“I would implore the fans to do that as well and I’m sure Celtic will do the same.

“We need the games to go ahead, we don’t want games getting postponed now. Hopefully, the supporters listen to what both clubs say.”

The Scottish Government’s unhappiness with Rangers supporters’ behaviour has led to a disagreement with the club after Sturgeon accused them of failing to show leadership on the matter.

The First Minister said Rangers “could have done more” to prevent their fans celebrating in large groups. In response, Rangers chairman Douglas Park accused Sturgeon of a “dereliction of duty” and said the Government failed to engage with the club.

It came in the wake of Rangers winning their first league title in 10 years, a period which included relegation to the bottom of the Scottish Football League following financial difficulties.

Bitter rivals Celtic had won nine titles in a row before this season, and Gough says Rangers cannot be blamed for their fans choosing to come together for an “outpouring of 10 years of hurt”.

“I don’t think the club should take criticism for that,” he said. “I think the police and Government knew that if Celtic did drop points, there was going to be a massive outpouring of people on the streets.

“We are in the middle of a pandemic but, to be fair, this wasn’t the first social gathering that’s happened this year. There’s been quite a few of them, big social gatherings, which shouldn’t have happened.

“Rangers are dealing with it in the way that they’ll deal with it. They’re in discussions with the police and the Government and they’re going to have to be careful about the Old Firm game [but] on Sunday you saw an outpouring of 10 years of hurt.

“It’s fantastic for the supporters because it’s the supporters who saved their football club. 10 years ago we were on our knees and had 55,000 people turning up at the games. I’m so happy for them.”

What next for Gerrard and Rangers?

Rangers brought an end to a decade of despair at the weekend as Steven Gerrard’s side secured their 55th top-flight Scottish title – but where do Rangers and their boss go next?

Since their demotion to the third division in 2012, it has been a long and, at most times, arduous return to the top of Scottish football for Rangers and their supporters.

However, in the midst of an undefeated league campaign so far following two false starts since his appointment in 2018, Gerrard has delivered what Rangers fans have been waiting for, stopping Celtic winning 10-in-a-row in the process.

But what comes next? Delicate contract talks, potential big-name sales and getting it right in domestic cups will all be part of Gerrard’s and Rangers’ thinking now.

Here, Sky Sports News looks at what new challenges may immediately present themselves, what needs to be done over the summer and what fans can expect from the title-winning manager and his Rangers team as they now aim to stay at the top of Scottish football.