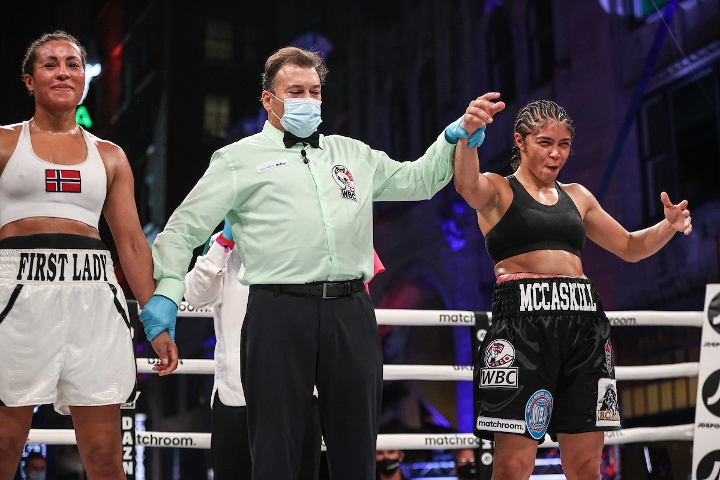 Almost seven months later, Cecilia Braekhus is just as sure Jessica McCaskill didn’t do enough to beat her in their welterweight title fight.

Braekus believes she should’ve won their 10-round championship match August 15 in Tulsa, Oklahoma. None of the judges agreed with the former champion’s assessment of their closely contested fight, which she lost by majority decision.

“I think everybody knows what I think about the scoring,” Braekhus told BoxingScene.com. “You know, I think I won the fight. I know a lot of people saw it as a draw, which I could’ve, of course, lived with because I feel I did what I had to do to win. I think she was at home and all the judges were from her country. So yeah, definitely I think that was a part of her walking away with the belts.”

Braekhus (36-1, 9 KOs), who will meet McCaskill (9-2, 3 KOs) in an immediate rematch Saturday night in Dallas, went off as an 8-1 favorite over McCaskill in part because McCaskill hadn’t boxed above the junior welterweight limit of 140 pounds prior to their fight.

That bout was contested at a catch weight of 145 pounds, two beneath the welterweight maximum. The weight limit for their rematch is 145 pounds as well.

Norway’s Braekhus was boxing’s longest-reigning champion before McCaskill upset her.

She had owned at least two welterweight titles since she defeated Denmark’s Vinni Skovgaard by unanimous decision to win the then-vacant WBA and WBC belts in March 2009. Braekhus tied Joe Louis’ longstanding record of 25 consecutive title defenses within the same division in the bout before she lost to McCaskill.

The 39-year-old Braekhus exercised her contractual right to a rematch almost immediately.

“I’m just ready for this rematch,” Braekhus said. “She can have all her judges. She can have everything. I’m just gonna go there and I’m gonna take my belts back. I don’t care. We can fight in her basement – I don’t care.”

Braekhus and McCaskill are set to fight at American Airlines Center, home of the NBA’s Dallas Mavericks and the NHL’s Dallas Stars.

Their second fight will be DAZN’s co-feature before another rematch between Juan Francisco Estrada and Roman “Chocolatito” Gonzalez. Mexico’s Estrada (41-3, 28 KOs) and Nicaragua’s Gonzalez (50-2, 41 KOs) are set to fight for Estrada’s WBC and Gonzalez’s WBA super flyweight titles in the 12-round main event.

Gonzalez defeated Estrada by unanimous decision in their 12-round WBA light flyweight title fight in November 2012 at the Los Angeles Memorial Sports Arena.