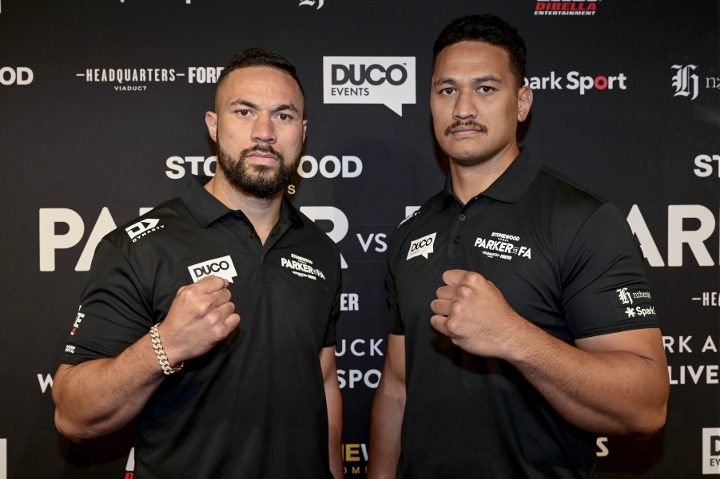 Junior Fa’s handlers expressed concern about the selection of judges for his all-New Zealand heavyweight showdown with Joseph Parker on Saturday night.

David Higgins, Parker’s promoter, assured them during a press conference Monday that the judges won’t matter when Fa is lying flat on his back, looking up at the ceiling inside Spark Arena in Auckland. Parker wasn’t as provocative as his promoter, but the former WBO heavyweight champion’s plan is to get rid of the undefeated Fa early in a scheduled 12-round fight DAZN will stream live.

Moderator Stephen McIvor asked Parker to predict a round in which he’ll stop his countryman.

The 6-feet-4, 245-pound Parker is considered a bigger puncher than the 6-feet-5, 255-pound Fa, who also has faced a much lower level of opposition.

Parker (27-2, 21 KOs) has knocked out 72 percent of his opponents. The South Auckland native has won each of his three bouts by knockout since he lost a 12-round unanimous decision to England’s Dillian Whyte (27-2, 18 KOs) in July 2018 at O2 Arena in London.

Fa (19-0, 10 KOs) has won 53 percent of his professional fights inside the distance. The Otahuhu native has gone all 10 rounds in each of his past two bouts – unanimous-decision victories over Dominick Guinn and Devin Vargas.

Parker, 29, and Fa, 31, were supposed to fight December 11 at Spark Arena. Their fight was postponed because Fa underwent an unspecified surgical procedure.

While waiting for Fa to recover, Parker also had surgery to remove bone chips from both elbows early in December.

DAZN’s coverage of the Parker-Fa card is scheduled to begin Saturday at 1:30 a.m. EST.