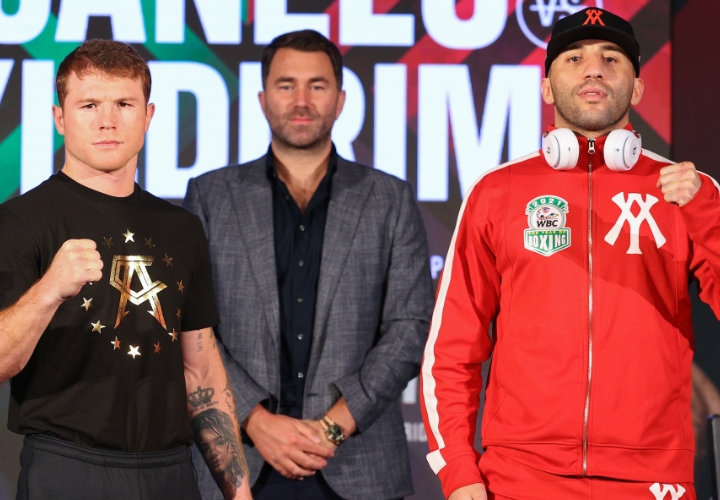 This card took a hit on Thursday when arguably the most interesting fight on the card, a flyweight clash between Julio Cesar Martinez and McWilliams Arroyo, was called off due to a Martinez injury. Most of the folks streaming in weren’t coming for that one. The 30-year old Alvarez (54-1-2, 36 KO), making his first start as a unified super middleweight titlist and first since vacating the lineal middleweight throne, is in action.

There are a handful of star fighters like him in any generation. Challenger Avni Yildirim (21-2, 12 KO), 29, makes his first start in almost two years, earning his second straight mandatory after a technical decision loss to Anthony Dirrell. It breaks a streak of six straight contests against fighters rated in the top ten by TBRB and Ring across three divisions dating to his first battle with Gennady Golovkin. A win sets the stage for Alvarez to attempt to add Billy Joe Saunders’ WBO belt at a mantle that already has the Ring, WBC, and WBA belts at 168.

A weekend full of super middleweight action kicks off Friday with this card from Italy. 28-year old Daniele Scardina (18-0, 14 KO) has moved into the top fifteen of the IBF so every win counts a little extra now. 35-year old Cesar Nunez (17-2-1, 9 KO) enters off a knockout win after consecutive knockout losses, including being part of the first round stoppage streak of Edgar Berlanga.

Night owls have a fun regional big man clash live from New Zealand to keep them up. 29-year old former WBO titlist Joseph Parker (27-2, 21 KO) looked stuck in neutral for a long stretch that included a listless unification loss to Anthony Joshua and the first two-thirds of his clash with Dillian Whyte. A late surge in the latter followed by three knockout wins should raise an eyebrow about whether Parker might have another act in him to deliver on early promise. The 31-year old Fa (19-0, 10 KO) should be a good test as he makes his big step toward possible contention.

Saturday mornings used to be for Smurfs and Super Friends. This Saturday, we get some bloodletting instead. Accomplished 29-year old Kazakh amateur Kamshybek Kunkabayev (2-0, 2 KO) continues his rapid move into the paid cruiserweight ranks. 35-year old Server Emurlaiev (23-1, 8 KO) has never been stopped and should be a good early gauge of where Kunkabayev is and how far he has to go.

Despite the sizable audiences possible, and often delivered on Fox, the PBC slate for the network has lagged well behind the fare provided on Showtime since the COVID restart in terms of marquee attraction. It doesn’t mean this won’t be a potentially fun scrap. 36-year old former super middleweight titlist Anthony Dirrell (33-2-1, 24 KO) resumes his career after suffering his first stoppage loss to David Benavidez. 26-year old Kyrone Davis (15-2, 6 KO) has won two straight and never been stopped. The card features some strong young talent with 19-year old welterweight Alejandro Ramos (14-0, 13 KO) and 22-year old Michel Rivera (19-0, 12 KO) in action.