In the spirit of turning a negative into a positive, Vergil Ortiz Jr. is in a very good place both in his career and from a geographic standpoint.

The unbeaten welterweight contender is set for his second hometown headliner within the span of his past four fights, this coming in an all-Dallas showdown with former 140-pound titlist Maurice Hooker. The bout takes place March 20, live on DAZN from Dickies Arena in Fort Worth, Texas, mere miles from where both boxers are located.

It will mark the sixth major post-pandemic boxing cards to be staged in Texas, which has become a boxing hotbed. It’s one of the few states in the U.S. allowing fans in attendance for combat sports events, leaving Grand Prairie’s Ortiz (16-0, 16KOs) with some leverage at the negotiating table to begin securing the dream fights he’s long craved.

“Obviously we want things to get better and go back to normal. But until that happens, it’s kind of cool that all of these big fights are taking place in my home state and I’m now a part of it,” Ortiz told BoxingScene.com. “For these guys who want to fight with fans in attendance, right now their options are really only Texas and Florida.

“So, that gives me something to work with, maybe finally get these guys in the ring with me knowing they can make more coming here than fighting somewhere without any fans.” 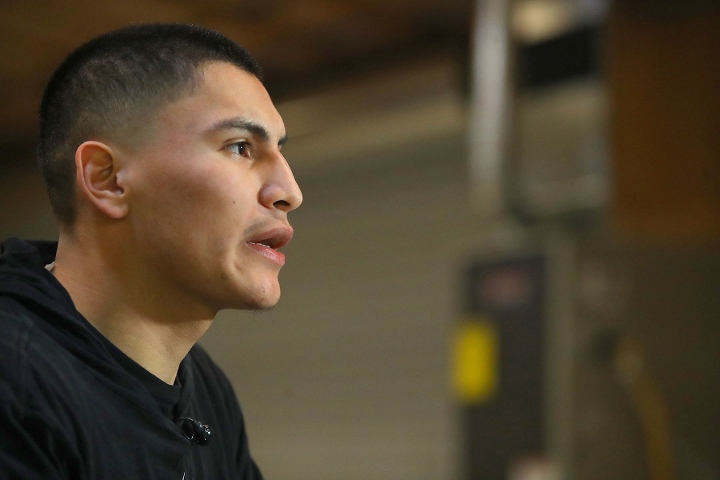 Ortiz had to experience a closed-doors atmosphere for his lone fight of 2020. It came atop the first DAZN show to air since the pandemic, taking place at Fantasy Springs Casino in Indio, California. Ortiz scored a 7th round stoppage of Samuel Vargas for his second straight win at the venue, having stopped Brad Solomon inside of five rounds in Dec. 2019 to cap a four-knockout Prospect of the Year campaign.

In his crossroads bout versus Hooker (27-1-3, 18KOs)—a former junior welterweight titlist from the Oak Cliff section of Dallas—Ortiz returns to his roots. Prior to his pair of bouts in Indio came a true homecoming, when the undefeated welterweight scored a 6th round stoppage of former title challenger Antonio Orozco atop an Aug. 2019 show in Grand Prairie.

Prior to landing this upcoming fight, Ortiz was in attendance for the last show in his home region when Ryan García played to a socially distanced capacity crowd of more than 6,000 at American Airlines Center in Dallas. Talks of a showdown with Hooker had already swirled by that point, making it easier to picture what such a fight will look like once the show returns to his hometown.

“I was definitely envisioning it,” Ortiz admits in watching García’s 7th round stoppage of Luke Campbell in front of a raucous crowd. “It was just making me even more pumped up. Then—voila—this fight is happening next for me.

“It’s kind of badass that the universe was listening and that here we are fighting in my hometown.”