Gary Neville has called Phil Foden “exceptional” and says he can help “light up” Euro 2020 for England – but where does the livewire best fit into Gareth Southgate’s XI?

Foden made two and scored another in a sensational man-of-the-match performance as Manchester City blew away Liverpool 4-1 at Anfield on Sunday night.

That made him the second-youngest player across Europe’s top five leagues to have reached 10 goals in all competitions by now, behind only Borussia Dortmund’s Erling Haaland, and he has started seven of City’s last eight Premier League games.

Neville told The Gary Neville Podcast just how highly he rates the 20-year-old, who he likened to both David Silva and Kevin De Bruyne, and highlighted why the club has made sure it has finally seen an alumni from its renowned academy become a first-team regular.

He said: “I remember Brian Kidd (City’s assistant) saying to me about 18 months ago, ‘If Foden doesn’t make it as a football player, we might as well pack it in’. You watch him here, we’ve seen glimpses in the last couple of years, but in this last month or two, it looks serious; this performance, this consistency. And it’s consistency that young players have to produce week in, week out.

“Watching Phil Foden, it’s breathtaking watching players like that. I love watching brilliant players, you think of David Silva for Manchester City or Kevin De Bruyne. Every time you come and watch them, you just think, wow, what a player.

“And there are players like that obviously all over the Premier League and great to watch but Foden, there’s something about the fact he’s a local lad, there is something in that.

“He’s a City player and obviously I’d prefer him not to be wearing a blue shirt, I’d prefer him to wearing a red shirt, I love Mason Greenwood, I love (Marcus) Rashford. I just absolutely love them; there’s that extra warmth, just because you think of the fact they’ve been on that journey that you’ve been on.

He’s in the team, staying on the pitch and he’s delivering in big matches

“And when they sign Ferran Torres, and they sign Bernardo Silva a couple years ago, they sign Mahrez, and they sign all these players and you just think to yourself, where’s it going? How’s this kid going to get a chance?

“And yet he stayed there and you see Jadon Sancho leave a few years ago, and then you think you have to leave Manchester City to get an opportunity.

“And he’s exceptional, he is absolutely brilliant. And I think, to be fair, Mason Greenwood’s exceptional as well when I watch him play. I think he’s got the ability to go on and be an unbelievable player for United.

“I speak warmly about him because I see the same type of what would be natural ability and that sort of effortlessness to the way in which they play, and I’d love to see them both play for England at a European Championships this summer, and light it up.”

During England’s 2018 World Cup run, England completed fewer take-ons than any of their semi-final rivals Croatia, France and Belgium, and despite their memorable tournament, scored only three goals in open play.

Southgate stuck with the same midfield three of Jordan Henderson, Dele Alli and Jesse Lingard where possible, with limited other options available to the side – but Neville thinks the tools at the England boss’ disposal are chalk and cheese less than three years on.

He said: “I look at England’s midfield players, the options they’ve got with (James) Maddison and (Jack) Grealish and Foden. You think to yourself now in that last World Cup where England really struggled to carry the ball in midfield and transfer it through the thirds, they were okay at times – but you just wondered that midfield, how it would connect to the front.

“I look at it now with players you can really accept the ball on the back foot and half turn and really look like they can beat people with a ball at their feet. I like it, I like that I like the players that are emerging.”

Where does Foden fit for England?

The sheer abundance of attacking midfielders and forwards competing for places in Southgate’s squad is becoming an embarrassment of riches – posing the question: how do some of Europe’s top emerging talents all fit in?

Foden may well have scored his stunner at Liverpool cutting in from the right flank, but he’s been operating primarily down the left this term, as has Jack Grealish, Marcus Rashford, Raheem Sterling, Bukayo Saka, Mason Mount and Ross Barkley. What gives? 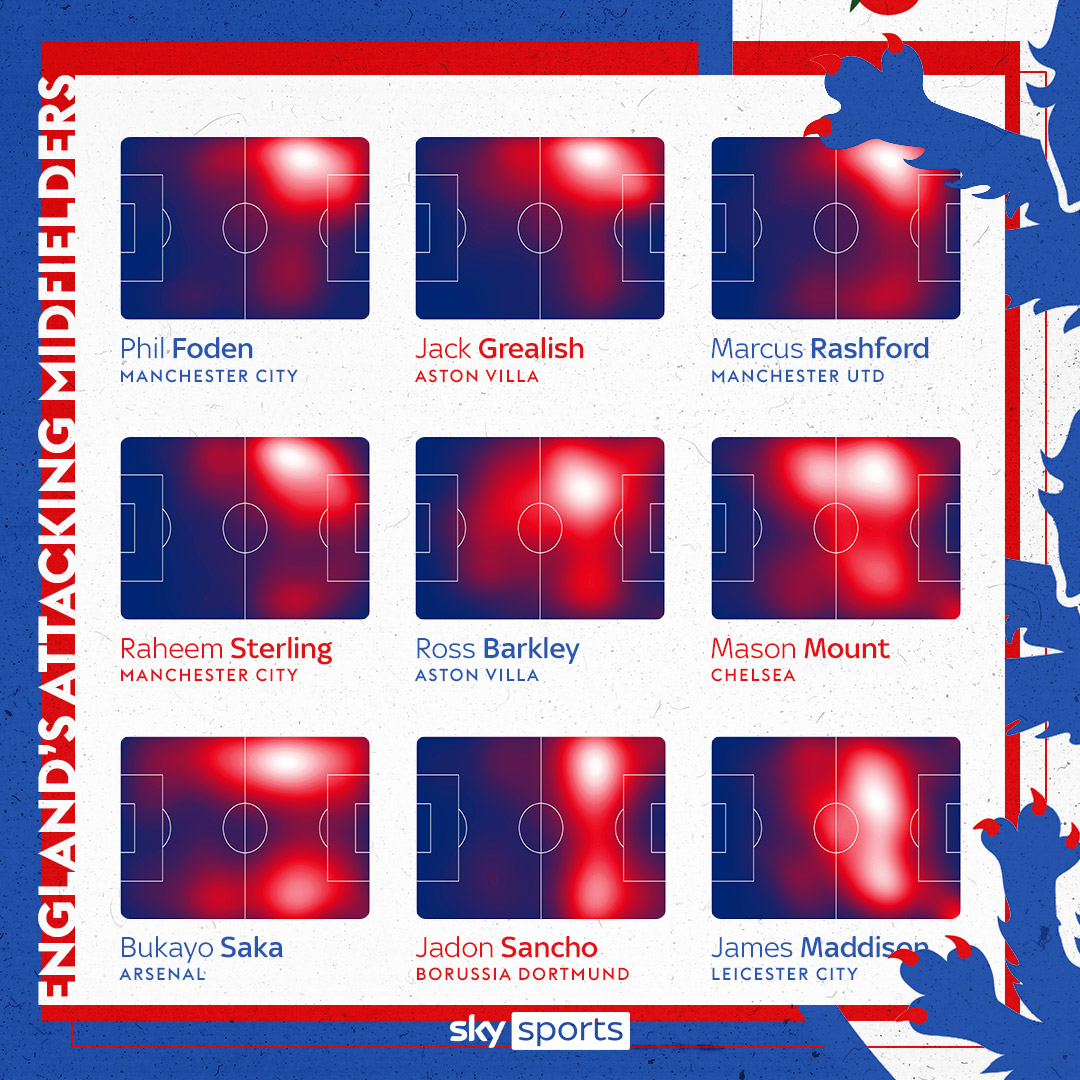 But Grealish is arguably England’s form player right now and Southgate appears unlikely to deploy the Villa captain in a deeper midfield role. And what about Saka?

With Jadon Sancho struggling for form at Borussia Dortmund, could Foden be shoehorned in down the right, with Sterling and Rashford vying for a starting berth down the left?

To accommodate England’s strengths, one alternative would be to stick with a back four, lose a defensive midfielder and go top-heavy in attack. If Leeds have taught us anything this season, it’s that the philosophy of ‘we’re going to score one more than you’ can reap rewards, albeit, perhaps, unsuitable for tournament competitions.

Mount is renown for his hard graft and ranks well across defensive metrics, so could he partner Jordan Henderson in a two-man midfield?

Most squad members play in teams accustomed with the high press and high work-rate and this principle alone, coupled with the plethora of devastating attacking talents and speed, would certainly strike fear among any opponent.

Who would you pick?

Would Foden make your line-up? Would Grealish start? And who should be England’s No 1? Have your say in our team selector below…

Pitch to Post podcast: Manchester City put one hand on the trophy?

Alisson may have had cold feet in the 4-1 defeat by Manchester City on Super Sunday, but are Liverpool’s excuses running thin? And has their decision-making off the pitch been poor this season?

Jasper Taylor is joined by Gerard Brand and Ben Ransom to talk through the latest round of Premier League fixtures, as Manchester City put one hand on the trophy with a thumping win at Anfield. Would this be Pep Guardiola’s best title?

After Thomas Tuchel’s Chelsea won for the third straight game, we assess how the German has changed the side’s structure, as well as some praise for the underrated Mason Mount.

In the Regional Review, James Cooper joins us to talk all things Manchester United: Is there any danger of David de Gea being dropped? And are they still targetting an attacker in the summer?

And in part four, we look back on a nightmare week for Southampton, who conceded 12 goals in two games.