Saul ‘Canelo’ Alvarez is prepared to take the lead for his celebrated return to Las Vegas.

The pound-for-pound king and reigning unified super middleweight titlist was granted a promotional license for his Canelo Promotions company to conduct business in the state of Nevada. His application was unanimously approved by the five-member panel of the Nevada State Athletic Commission (NSAC) during its monthly agenda hearing which was held Tuesday morning remotely via conference call.

“We’re honored and thankful that you consider Nevada,” Anthony Marnell, commission chairman stated to Alvarez and his legal representatives in delivering the good news. “We welcome you to our state.” 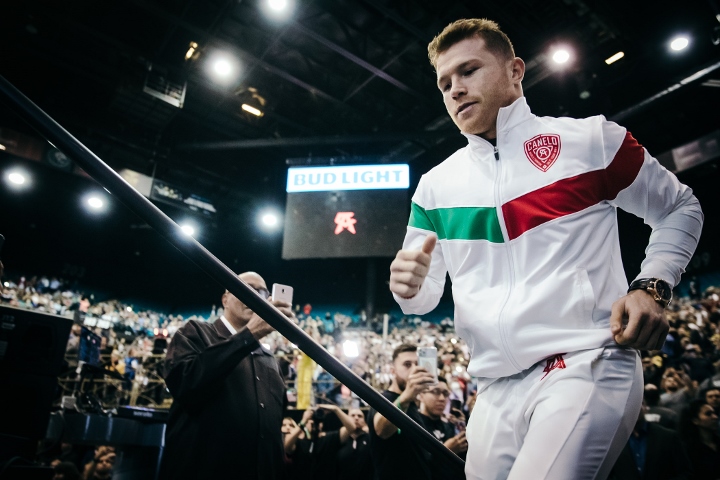 The move comes ahead of Alvarez’s planned return to Las Vegas, which is expected to take place in a three-belt super middleweight title unification clash versus England’s Billy Joe Saunders (30-0, 14KOs) on May 8. The preferred venue is Allegiant Stadium, home to the NFL’s Las Vegas Raiders and which has yet to host a boxing event.

Such plans would provide Alvarez with the second time he gets to christen a Vegas location as it relates to hosting a boxing card. The first such occasion for the Mexican superstar came in a May 2016 knockout win over Amir Khan, which headlined at T-Mobile Arena where he has fought five times.

Overall, Alvarez has fought 12 times before in Vegas, beginning with a 9th round knockout of Jose Miguel Cotto at the MGM Grand Garden Arena in May 2010. The bout served in supporting capacity to Floyd Mayweather’s 12-round win over Shane Mosley, whom Alvarez outpointed at the same venue in May 2012 for his first fight back in Vegas. It also came on a card topped by Mayweather, who outpointed Miguel Cotto to win a junior middleweight title.

Alvarez would land his own headlining win over Cotto, going 2-0 versus the family following a Nov. 2015 points win to claim the lineal middleweight championship. The event aired live on HBO Pay-Per-View from Mandalay Bay, generating roughly $60,000,000 from 937,000 units sold along with a live gate of $12,470,200, which remains the 17th best-selling boxing event in Vegas history.

Guadalajara’s Alvarez (54-1-2, 36KOs) owns six of the 35 best-selling Vegas boxing cards, including three of the top five. Alvarez’s lone career loss—a 12-round decision to Mayweather—took place in front of a sold-out crowd at MGM Grand as part of Mexican Independence Day celebration in Sept. 2013. The event set the all-time box office record at the time in amassing $20,003,150 in ticket sales.

Mayweather and Alvarez have since surpassed that mark two times apiece. For Alvarez, both moments came in his two-fight set with Gennadiy ‘GGG’ Golovkin. Their first fight—which was fought to a disputed 12-round draw—generated $27,059,850 in ticket sales at T-Mobile Arena. The venue also hosted Alvarez’s majority decision win in their Sept. 2018 rematch, which sold $24,473,500 worth of tickets.

Alvarez’s last two fights in state came in two separate weight divisions. A 12-round win over Daniel Jacobs saw Alvarez become a three-belt middleweight titlist in their May 2019 unification bout at T-Mobile Arena which generated $8,685,750 in ticket sales. Six months later, Alvarez moved up to light heavyweight where he scored an 11th round knockout of Sergey Kovalev to win a light heavyweight title. Their Nov. 2019 bout took place at MGM Grand Garden Arena, selling $8.173 million in ticket sales.

All of Alvarez’s previous appearances in Las Vegas came under the Golden Boy Promotions banner. The two parties had a contentious split last fall, with Alvarez having since worked with Eddie Hearn’s Matchroom Boxing outfit beginning with a 12-round win over Callum Smith last December at The Alamodome in San Antonio, Texas. The event produced a live gate of $2,303,100 from 11,213 tickets sold in his first fight since the pandemic.

The win over Smith saw Alvarez emerge as a true four-division titlist, joining ‘Sugar’ Ray Leonard and Thomas Hearns as the only fighters in history to win major titles at junior middleweight, middleweight, super middleweight and light heavyweight.

Alvarez has since signed a two-fight co-promotional agreement with Matchroom and has settled in as a super middleweight. He will next defend his unified WBC/WBA titles versus mandatory challenger Avni Yildirim. The bout will take place on Feb. 27th at Hard Rock Stadium in Miami, Florida, which Alvarez has fully embraced although with the intention of returning to the fight city he has long considered his second home.

“Canelo looks forward to returning to the entertainment capital of the world, Las Vegas,” Greg Smith, Alvarez’s attorney noted on behalf of Canelo Promotions during the monthly agenda hearing. “Canelo Promotions isn’t going to be like every other promoter. It certainly won’t be doing shows every weekend. But you can bet it will be the promoter of Canelo’s fights.

“Canelo Promotions looks forward to returning to Las Vegas and lighting up the strip, doing so in front of thousands upon thousands of fans.”

That moment will presumably come this May, with the commission more than happy to welcome back Alvarez with arms wide open.

“Gracias,” Alvarez humbly offered in response to the unanimous vote in his favor.