Yamileth Mercado retained the WBC super bantamweight world championship for the first time, by defeating a brave and willful Alejandra Guzmán, by a clear and well-worked victory by unanimous decision, in the main event of a card presented by Zanfer and 2M Promotions in Hermosillo.

“Yeimi” Mercado (17-2, 5 KO’s) imposed her boxing, precision in her combinations and the rhythm of the fight, dominating the contest both at the long and the short distance. She executed an effective fight plan, landed more and better, and was the boss in the ring.

After an even start to the fight, Yamileth took control and dominance of the fight based on precise hitting, managed pace and distance, and did not despair or press for the knockout. She scored effectively, and she looked superior. 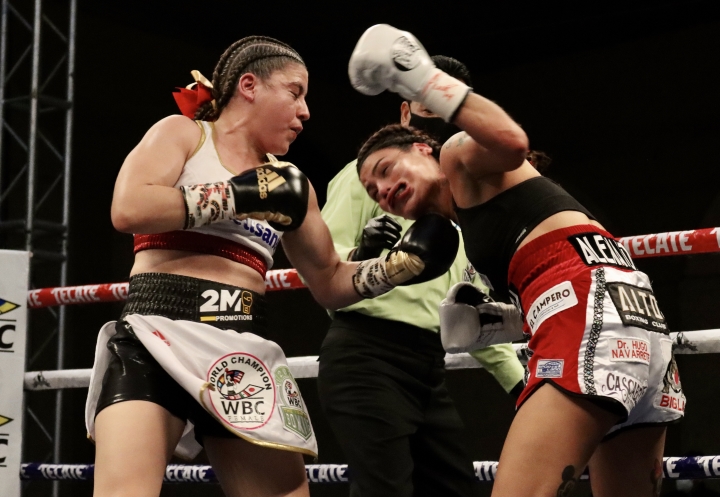 The “Rockera” Guzmán (11-2-2, 5 KO’s) did not enter the ring to simply collect a check. She planted herself looking to land power shots and showed that she came in with great preparation. She was able to land on the world champion, although she couldn’t get the punches off more often.

In the seventh round, Guzmán wielded her might and found the hole in Mercado’s guard, who felt the punishment of the “Rockera” and was more concerned with defending herself more so than attacking. It was that period of attack that lifted her spirits and restored some confidence in the challenger.

“Yeimi” regained the initiative and control of the fight, but Guzman was coming forward more often and trying to land power shots.

The fight reached the tenth round, and with the task of gambling everything she went after Mercado and managed to stagger the champion before the bell rang.

It was a very competitive fight, although clearly the quality of the world champion prevailed. Guzmán had moments of great brilliance, but Mercado established the conditions of the match in terms of pace, distance and consistency, landed the most shots and won the most rounds.