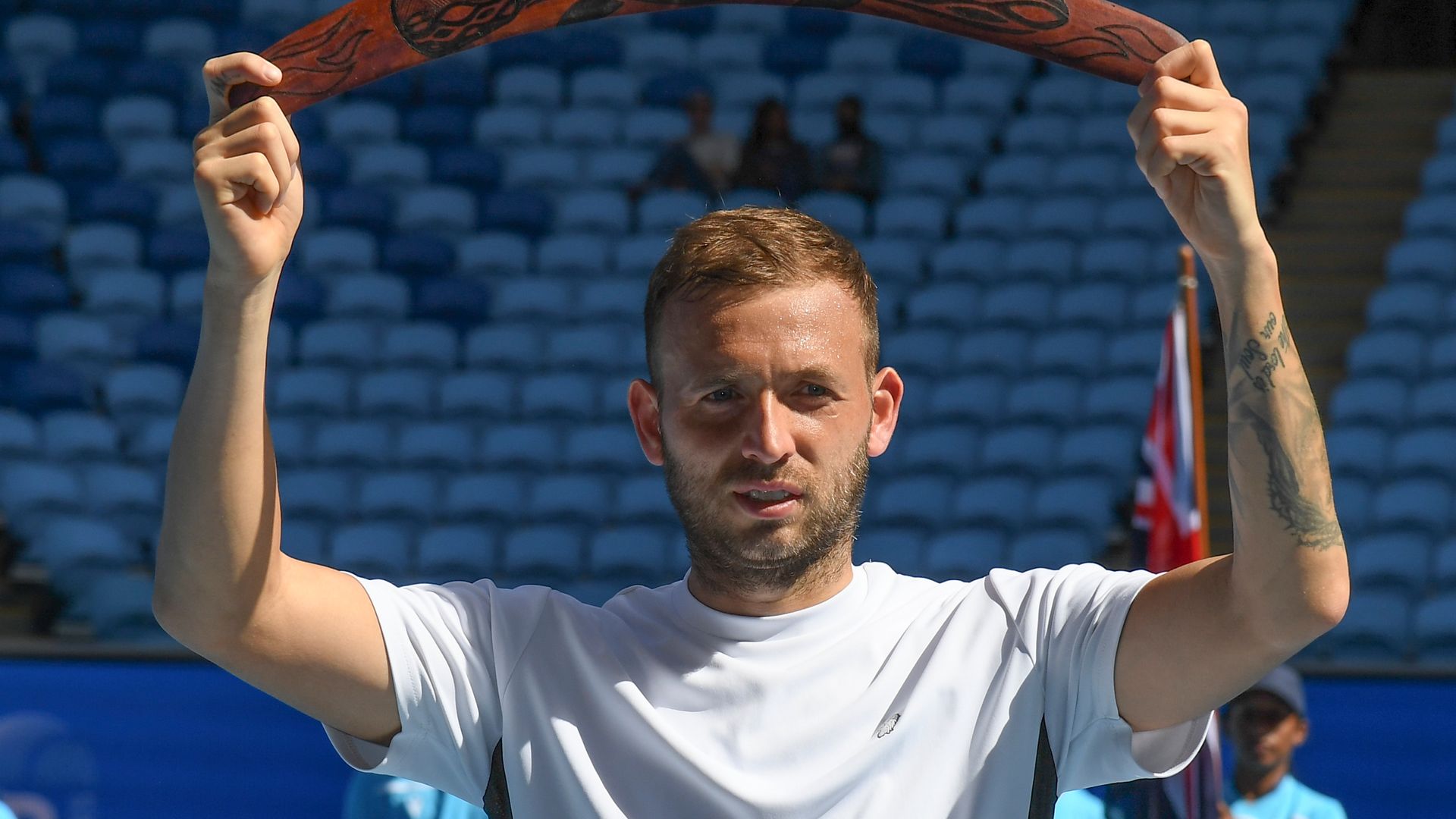 Murray River Open victory will give British No 1 Dan Evans a confidence boost heading into the first Grand Slam of the year, where he has not advanced beyond the second round since 2017; he faces compatriot Cameron Norrie in the first round on Tuesday

Evens continued his impressive form into the lead-up to the Australian Open, which begins on Monday, by beating the Canadian with a commanding 6-2 6-3 victory in just 77 minutes.

The 30-year-old made it third time lucky, however, upsetting the 21st-ranked Auger-Aliassime

The victory was not without its anxious moments, with Evans serving for the match at 5-2 in the second set only to be broken.

But he immediately hit back to break the third seed in the subsequent game and secure the win having not dropped a set (10-0) in five matches.

The Briton played a consummate match overall, dropping just the one service game to Auger-Aliassime’s five, refusing to allow his opponent to get into any rhythm, and with his backhand slice, in particular, exerting pressure on the Canadian, who committed 32 unforced errors.

The long-awaited win for Evans came despite the fact he is playing without a coach while in Australia.

Evans split from mentor Mark Hilton last year after the coach decided to take up a full-time role with the Lawn Tennis Association.

Evans had a trial with Australian Chris Johnstone ahead of this week but it did not work out, leaving the 30-year-old with only his girlfriend and an Australian-based friend in his team.

Auger-Aliassime was bidding for his first title in his seventh final.

Perfect preparation for Barty and Mertens

The 24-year-old Australian, playing her first tournament for almost a year, was made to work hard for her second WTA title on home soil but had enough weapons in her armoury to see off the former French Open and Wimbledon champion in a gripping contest.

“It was some of the better tennis I played throughout the whole week,” Barty said. “Garbine forced me to play at that level. It was a great final and I’m happy with the progression of the level of tennis through the week.”

Barty habitually dismisses talk about pressure at the Australian Open and said only that she was excited and ready to go.

“I’m just trying to come out here and do the best that I can,” she added.

“I’ve done the preparation, I’ve eaten my Brussels sprouts, done everything to put myself in a position that I can go out there and perform at the best level I can.”

The 2019 French Open champion, a semi-finalist here last year, will have a day off to recuperate before opening her campaign against Danka Kovinic on Rod Laver Arena on Tuesday.

Elise Mertens secured her sixth career WTA title when she made light work of experienced Estonian Kaia Kanepi 6-4 6-1 to win the Gippsland Trophy.

Anett Kontaveit and Ann Li shared the Grampians Trophy after time ran out to complete the warm-up tournament arranged to give match practice to the players who endured 14 days of hard quarantine in Melbourne.

Daniil Medvedev enjoyed the perfect Australian Open preparation as he fired Russia to victory in the ATP Cup with a dominant 6-4 6-2 win over Italy’s Matteo Berrettini.

With Andrey Rublev having thrashed Fabio Fognini 6-1 6-2 in the opening singles, world No 4 Medvedev sealed the tie 2-0 at Rod Laver Arena as the rampaging Russians stormed to the title undefeated.

Italy could have done with teenager Jannik Sinner in their ranks after he sealed back to back ATP titles with victory at the Great Ocean Road Open. The 19-year-old beat compatriot Stefano Travaglia 7-6 (7-4) 6-4 for a 10th consecutive win.