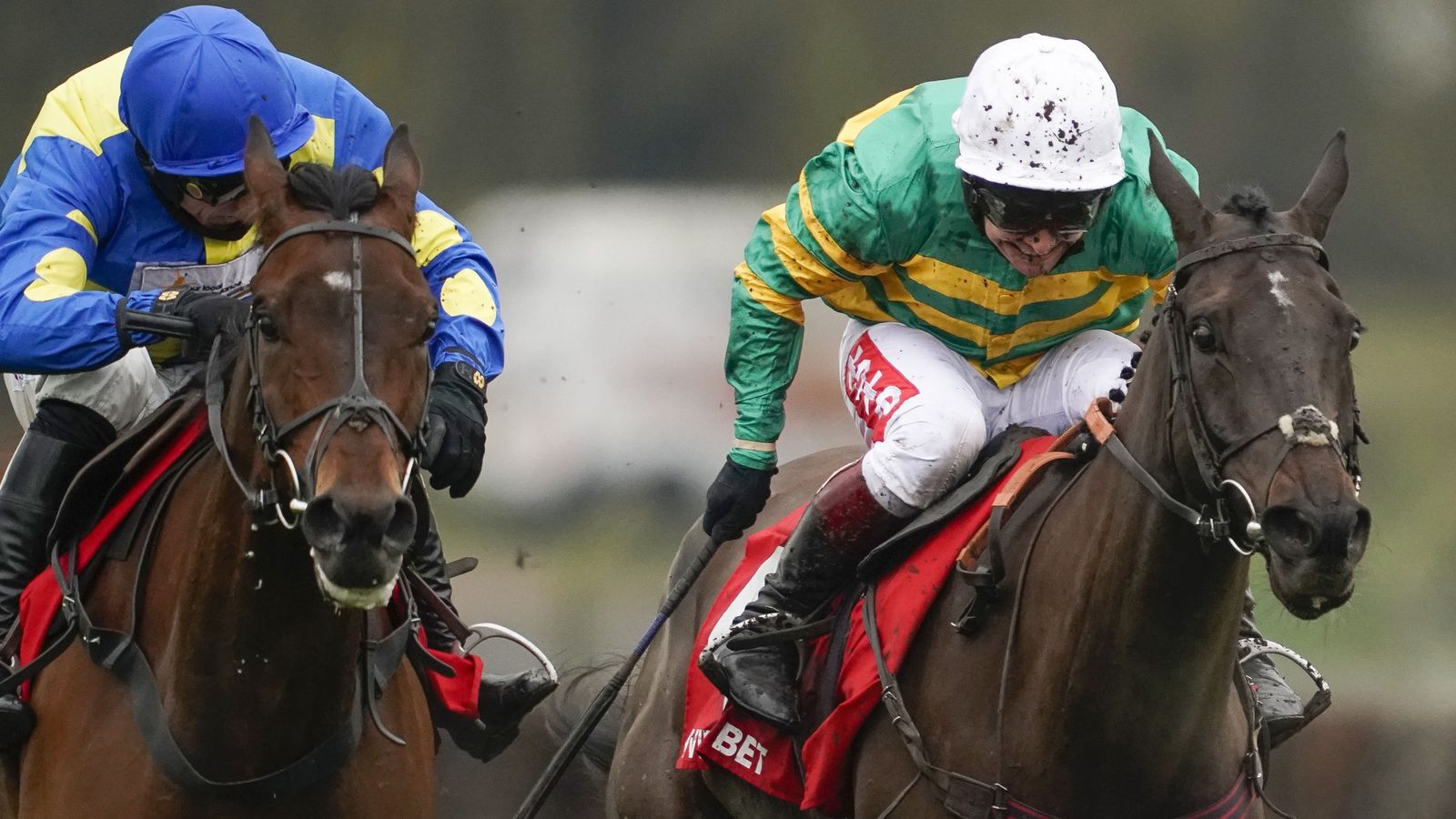 Never has a Sandown Park card taken place in such testing conditions, with the GoingStick reading at a record-low 3.7, but the desperate ground proved no hindrance to Sporting John, whose stamina kicked in as he strode away up the hill to land the feature Virgin Bet Scilly Isles Novices’ Chase.

The Philip Hobbs-trained 14-1 chance looked all at sea early on in the two-and-a-half-mile contest and was all but tailed off on the first circuit, but Richard Johnson’s mount, who had been beaten 33 lengths on his seasonal bow at Exeter, gradually warmed to the task and crept into contention at the Railway fences.

Unbeaten over the bigger obstacles going into this was Dan Skelton’s Shan Blue (2-1 joint-favourite), who had been very impressive in three outings, including when beating The Big Breakaway in the Kauto Star Novices’ Chase at Kempton last time out.

When the other joint-favourite Hitman departed at the sixth-last when a close-up third, Harry Skelton’s mount looked the likeliest winner, and had the dogged Paint The Dream struggling in pursuit.

A great leap at the last appeared to give Shan Bleu the momentum, but Johnson’s mount kept responding to pressure and the six-year-old, who had winning point form over three miles in Ireland, wore down his rival to score by three and three-quarter lengths.

Paint The Dream stayed on to be third, a further nine and a half lengths back.

Johnson said: “They have gone a good, strong gallop and he has had only one run over fences at Exeter. He was disappointing there. Before Christmas a lot of the horses were not finishing their races, but owner JP McManus is very good. There is no rush and he said to wait until the horse is right.

“Philip thought he was in good form the last couple of weeks and he’s come here today and proved it. It has taken him a good mile to just get him into that rhythm and start to operate. With the ground, the race has come back to me a bit from the Pond Fence and it worked out really well.

“He is probably a three-miler as such, but with conditions as they are at the moment, that is probably what you need. It is fantastic today and it’s great to get a Grade One winner.”

Plans are fluid for Shan Blue according to his trainer, who felt there were no excuses and the Marsh Novices’ Chase at the Cheltenham Festival is still an option.

Skelton said: “The third horse stays well, so it gives a solid look to the form and there are no excuses. He is in the Mash and handled the ground, of course he has.

“But I think every horse is going to be a bit better on better ground. The ground is what it is. You either want to run on it or you don’t. We’re happy with it. We’ll talk to owner Colm Donlon about Cheltenham. We’ll worry about tomorrow rather than what happens in six weeks. There is always Aintree and that is exactly what we need to talk to Colm about.

“At the end of the day, he is a very good novice chaser and we have the option to go three miles or not.”