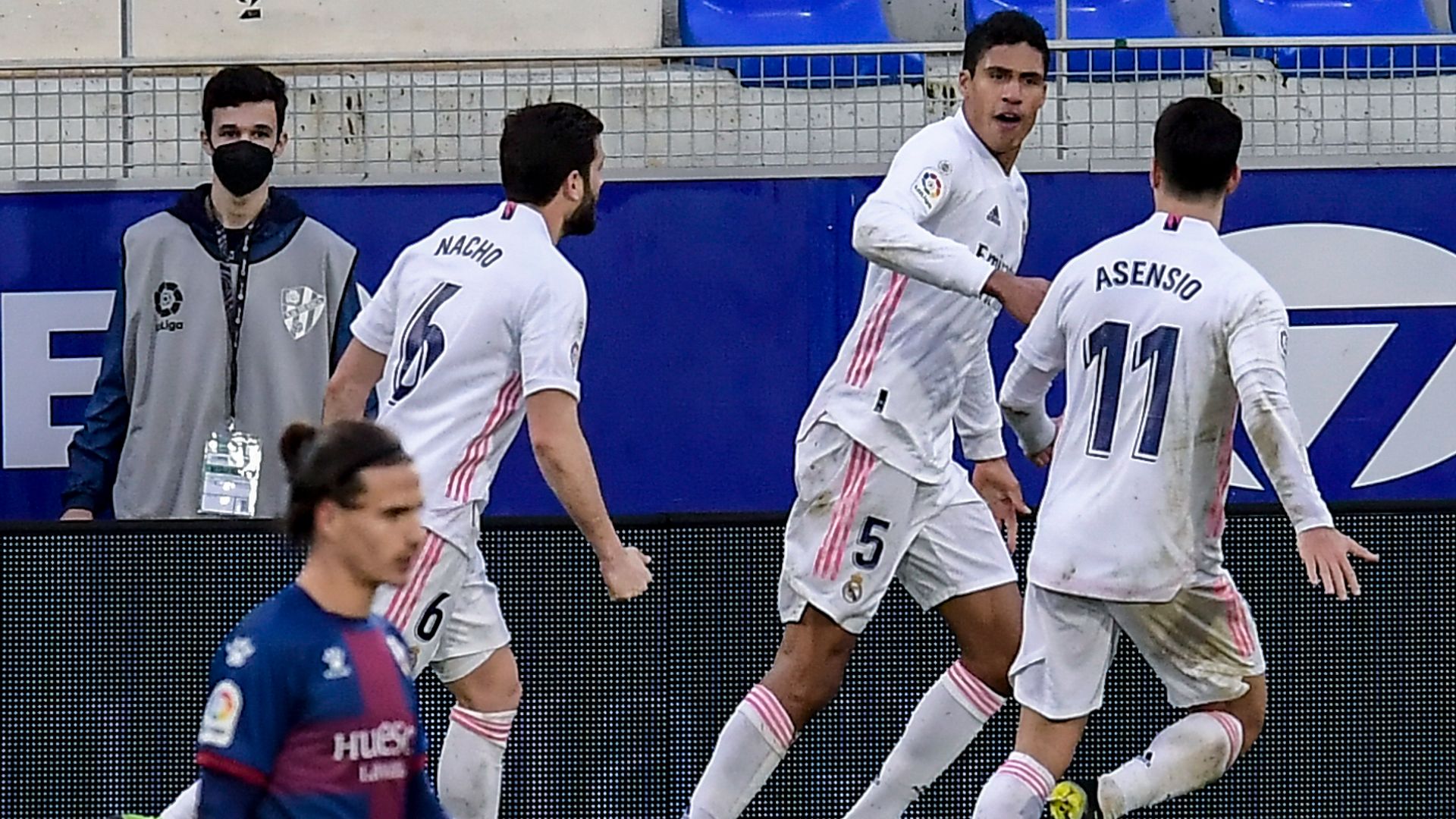 Raphael Varane scored twice as Real Madrid came from behind to snatch a 2-1 victory at basement side Huesca in La Liga on Saturday and offer some respite to coach Zinedine Zidane.

Huesca took a shock lead against the Spanish champions early in the second half with a vicious strike in off the post from Javi Galan, and nearly doubled their advantage moments later when Rafa Mir struck the bar.

Real pulled level in the 55th minute when Karim Benzema thumped a free-kick off the top of the bar and the ball bounced perfectly for Varane to head home from close range.

The France defender then struck the winner, bundling over the line in the 84th minute following another free-kick, to spare his side’s blushes.

Zidane had hit out at reporters in the build-up to the game over speculation about his future in light of disappointing results but the win took his side second in the standings on 43 points, seven behind Atletico Madrid, who have two games in hand.

Borussia Dortmund conceded two goals in three minutes to slump to a 2-1 loss at Freiburg that sees them concede ground in the race for a Champions League place.

Dortmund, now 16 points behind leaders Bayern Munich, have long given up on the title but a third loss in the last four league games keeps them in sixth place in the Bundesliga.

Freiburg stunned the visitors with two goals in three minutes after the break with Jeong Woo-yeong firing in from 20 metres in the 49th minute and Jonathan Schmid on target in the 52nd minutes.

Emre Can had hit the woodwork in the first half for Dortmund but they were dazed following the double strike after the break.

The introduction of 16-year-old Youssoufa Moukoko gave them some inspiration but though he cut the deficit in the 77th minute after a good run from Erling Haaland, he could do nothing more to avoid his club’s fourth loss in the last five away matches.

Dortmund are on 32 points, three points off Bayer Leverkusen, who currently occupy the fourth spot that grants entry to Europe’s top club competition.

Leverkusen’s 5-2 win over Stuttgart was capped by new signing Demarai Gray’s first goal on his Bundesliga debut after switching from Leicester.

Kerem Demirbay scored twice to put Leverkusen on course before Sasa Kalajdzic pulled one back in the 50th minute.

Leon Bailey made it 3-1 though there were justified complaints from Stuttgart that Timothy Fosu-Mensah should have been penalized for handball at the other end.

Florian Wirtz headed Leverkusen’s fourth, and Gray killed the game in the 84th minutes after Kalajdzic had scored his second.

RB Leipzig cruised past Schalke 04 3-0 to stay seven points behind Bayern Munich and leave their opponents anchored at the bottom of the table.

Nordi Mukiele struck in first-half stoppage time when he drilled in a corner but they had to wait until the 73rd minute to add a second through Marcel Sabitzer, before Willi Orban’s 87th-minute header made it 3-0.

Shkodran Mustafi made his Schalke debut despite not training with the team after joining from Arsenal but could not help his new side add to a paltry total of just eight points from 20 games.