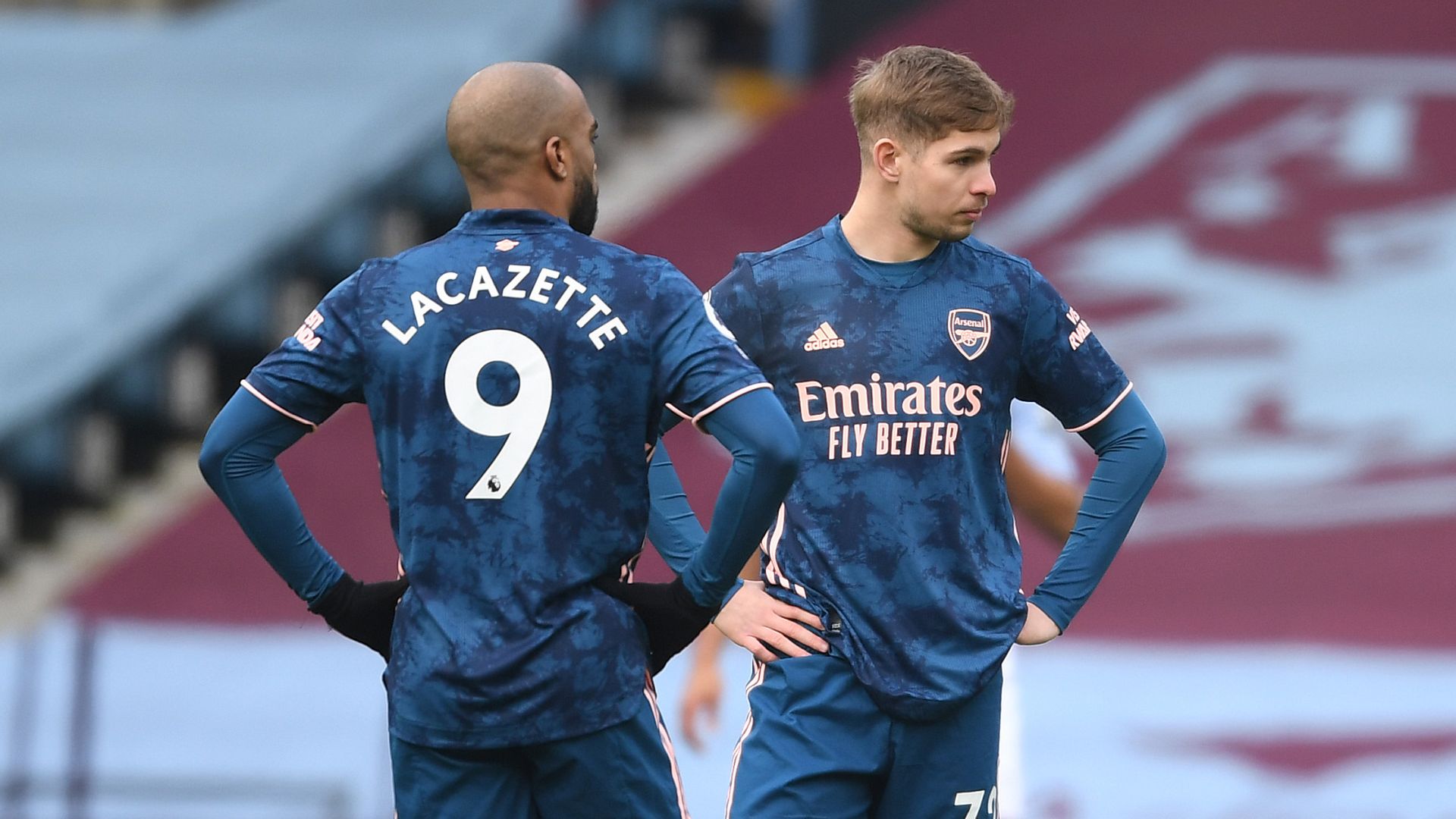 Arsenal in danger of another year in mid-table

Arsenal are in increasing danger of suffering another season of mid-table mediocrity in the league, after dropping further ground in the race for Europe in a limp defeat at Aston Villa.

Losing to Wolves on Tuesday night could be explained away by their two red cards, but even a VAR-denied penalty for Emi Martinez’s shove on Alexandre Lacazette at a corner could not excuse the manner of their loss at Villa Park, and Mikel Arteta said as much after the game.

“Regardless of those decisions we have to win the game. It is as simple as that,” he stated. Decisions will go for and against Arsenal across the season, even if they do seem less than favourable at the moment. They cannot control it either way.

Their performance, lack of intensity and poor concentration leading to Ollie Watkins’ early winner, as well as a host of other Villa chances, is entirely down to them though.

The Gunners are already five points off seventh, which could end up being the last possible European spot, and if the teams above them win their games in hand that could rise. With Leeds, Leicester and Manchester City to follow in their final three games of February, life is not going to get any easier.

Seven games without defeat changed the feeling around Arsenal, certainly around Arteta, and back-to-back defeats have not brought the pressure back on him yet.

But if Arsenal are left relying on the Europa League to keep their season alive before the month is out – and even that relies on navigating a Benfica side with plenty of continental ambition themselves – it will not be far off.
Ron Walker

If Aston Villa’s aim this season was to improve on the last campaign: they are about to do it easily. Their win over Arsenal means they are at 35 points, the same tally they mustered up last season, in just over half the time.

They have tightened up massively in defence – helped by the signings of Emi Martinez and Matty Cash, and the continued development of Ezri Konsa next to a solid Tyrone Mings – but Matt Targett’s improvement at left-back is arguably the most surprising and impressive.

The 25-year-old, signed for £11m in the summer of 2019, albeit dangerous in the final third, was last season criticised for being lightweight and lacking bite in the tackle. He looks a different man this term.

Statistically compared to last season, Targett is tackling more and to more success, blocking more and being dribbled past less – 0.77 times per game compared with 1.22 last season.

But aerially is where Targett has improved most – last season his aerial wins were at 1.45 per game average; they are now at 2.26 per game.

In an age where VAR has softened football, almost beyond recognition, Targett is throwing his body about hard and fair. Like most of Villa’s team, he has hardened up, and Dean Smith now has a side to be feared both physically and technically.
Gerard Brand

Newcastle show they are fighting… for someone

Few could argue that things have changed at Newcastle since Graeme Jones arrived to provide Steve Bruce with some assistance.

They have scored more goals in their last three games than they did in their previous 11, picked up two wins from three to put daylight between themselves and the drop, and more than anything, provided some much-needed entertainment.

If the win at Everton was a carefully curated piece of art, this was the equivalent of chucking paint at the wall in the dark. When the lights were turned on at 5pm, the result was just about passable – an acquired taste at best – beating Southampton 3-2 but with nine men and three injuries. Bruce’s side once again pressed, were bold in their attacking play, all with the caveat of space in behind their defence.

For those predicting Newcastle players would down tools as the pressure grew on Bruce, the last eight days have at least proved that forecast to be false. Newcastle players threw bodies all over the shop to secure a win that seemed unlikely with 40 minutes remaining, and despite having a numerical disadvantage, sprinted more than their opponents (135 sprints to 112).

But the big question is: who exactly are these players fighting for? Is it Bruce, the man on a pedestal, who admitted after the game he knew this job was a “health hazard”. Or is it the new man Jones, active on the sidelines, who looks to have implemented a style of football he also adopted at Luton?

Or, more likely, is it both?

We will probably never know, but one surety is that this Newcastle team are, dare I say it, at last good to watch.
Gerard Brand

Hasenhuttl must prove himself again

Southampton’s 9-0 defeat by Leicester last season has forever been credited as the lightbulb moment for Ralph Hasenhuttl. Of course, it was not; Saints lost another three games before things got better, but that is not good for narrative.

But talking of moments, Hasenhuttl certainly will not want the image of him on his knees, weeping with joy having beaten Jurgen Klopp’s Liverpool, to be forever known as the moment it started to go wrong. Since that win on January 4, Saints have lost five on the trot and conceded 18 goals. In fact, they have scored just five in their last 10.

Such is the bizarre, swinging nature of this season, Saints have gone from European contenders to decidedly mid-table in the space of a month. Having led the division for a brief period in November, they are now closer to 17th than they are the top seven.

It is their turn for crisis – everyone is having one this season – a crisis in which questions about Hasenhuttl’s coaching ability should be resisted.

Nevertheless, the Austrian’s style of play has inhibited them in recent weeks; Hasenhuttl likes to slow down possession, draw opponents out and then pounce with pace and the precision that the likes of Danny Ings brings. Against the 10 men of Newcastle, in particular, that was impossible.

Hasenhuttl has credit in the bank, but he must prove again he can claw Saints out of a nasty patch.
Gerard Brand

There may have been a few raised eyebrows when Brighton academy product Robert Sanchez replaced the exiled Mat Ryan as the Seagulls’ No 1 in the middle of December. But the 23-year-old goalkeeper has more than proven his credentials – Brighton have only lost two games since his current stint began on December 16.

In fact, they are unbeaten in five Premier League games and before Johann Berg Gudmundsson’s equaliser on Saturday, he had kept four successive clean sheets – including against Tottenham and Liverpool – and had not conceded in 458 minutes of league action.

But it was the manner of his saves that was so impressive against Burnley. He showed off some superb reactions in the first half to keep out Dwight McNeil and James Tarkowski and thwarted Matej Vydra twice after the break as the hosts dominated.

He collected most of the set-pieces that came into the area and was strong in the air – much-needed against a Burnley side who match Brighton for their stature and physicality.

Brighton boss Graham Potter told Sky Sports: “I think he’s getting better and better. That’s what we’re hoping and the more he plays, the more chance of that. I thought it was an impressive performance, he made some good saves and aerially, he dealt with a lot of Burnley’s stuff as well so I’m pleased for him.”

It is looking increasingly likely that Brighton will avoid the drop – now 11 points clear – and they will certainly have Sanchez to thank if they survive.
Charlotte Marsh​​​​​​