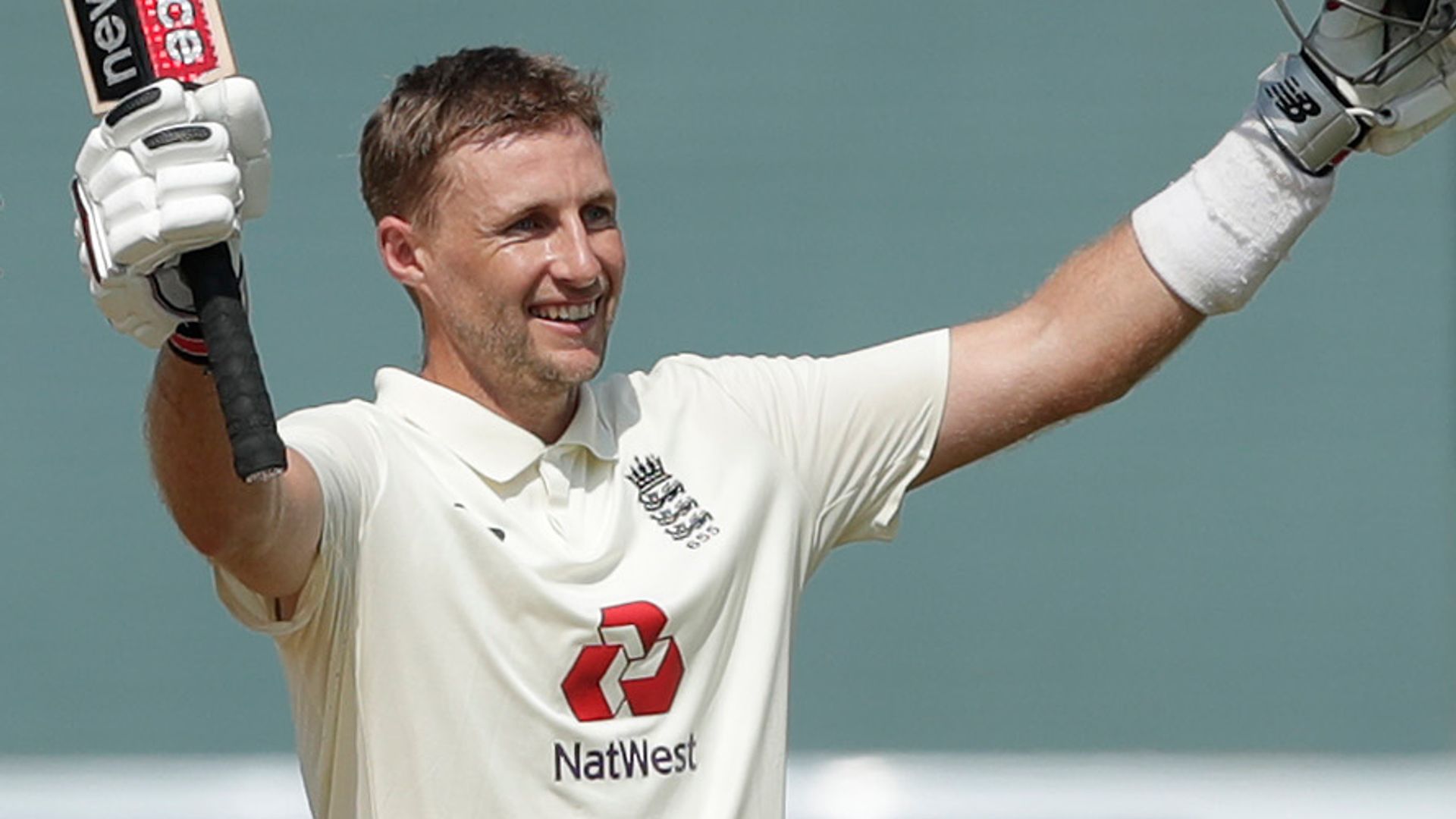 England end day two of the first Test against India on 555-8 after a double century from Joe Root (218); Ben Stokes adds an entertaining 82 before India fight back with four wickets in the evening session in Chennai

Joe Root made history as the first player to score a double hundred in his 100th Test as he made a magnificent 218 as England controlled day two of the first Test against India.

The England captain started the day on 128 and appeared in complete control throughout this record-breaking knock as he brought up his fifth 200-plus score in Test cricket, reaching the milestone in style by launching Ravi Ashwin over long on for six.

His 377-ball vigil was finally brought to an end on 218 early in the evening session as Shahbaz Nadeem got him lbw, soon after Ollie Pope (34) had fallen in the same manner to Ashwin.

Ishant Sharma then took two wickets in two balls to move to 299 in Tests but Dom Bess (28no) and Jack Leach (6no) saw England to 555-8 at the close, a total bolstered by Ben Stokes’ enterprising 82 in a stand of 124 with Root early in the day.

England started the day on 263-3 and aiming to build on an impressive first day, with Stokes new to the crease.

Having made a composed start to his innings, the all-rounder surprised everyone, including the bowler, when he popped his 16th ball back over Ravi Ashwin’s head for six – a shot that seemed to spark the day’s play into life.

Ashwin got a couple to turn sharply out of the rough to keep Stokes on his toes but it was only when Nadeem was brought into the attack that things really started to happen.

England had got after him and Washington Sundar on day one and tried to do so again but with a bit of assistance from the pitch, the left-arm spinner was able to fight back.

Ashwin changed ends and while India lost two reviews in two overs, for lbw shouts off Stokes when he had clearly gloved an attempted reverse-sweep and then Root, the ball shown to be going over the top, that was the start of a period of India pressure.

Stokes was dropped twice in the next two overs, on 31 and 32, tough chances from Ashwin off his own bowling and Cheteshwar Pujara off Nadeem going down. The left-hander almost ran out Root as well, only a poor throw saving the England skipper in the over after making he had reached 150 for the 10th time in Tests.

Stokes kept battling though, putting pressure back on Nadeem with back-to-back reverse sweeps for four to bring up his 23rd Test fifty.

The stand was 92 by lunch and reached three figures early in the afternoon session, Root punched Nadeem through the covers for four to take it to 99 before working a single.

It was Stokes who remained the chief aggressor though, powering Nadeem back over long on for his third six of the innings and moving to within sight of a century before trying to slog-sweep the same bowler for another and getting a top-edge that carried to Pujara in the deep.

That brought the returning Pope to the middle and while he took his time to acclimatise to conditions after six months out of the side, Root made sure England kept ticking along and was soon approaching his double century.

A reverse paddle sweep for four helped him on his way but Root had largely dealt in singles, which made his decision, on 195, to skip down the pitch and take Ashwin over long on all the more incredible.

He middled, of course, and as the ball was fetched from the empty stands, Root peeled off his helmet and took the applause once more.

By tea, India had burnt their last review on a hopeful appeal for a catch off Pope, the partnership had passed 50 and England had moved to 454-4, no doubt with eyes on a score in excess of 600.

India’s bowlers kept plugging away though and Ashwin ended a stand of 86 when he had Pope plumb lbw with a ball that went straight on and hit him on the back leg.

Root moved past Alec Stewart and into third on the list of England’s all-time Test run-scorers but his mammoth innings ended shortly after, a very rare misjudgement seeing him pinned in front by a ball that skidded on from Nadeem.

England were determined not to let such a strong position slip and a 48-run partnership between Jos Buttler and Bess prevented a collapse and took them past 500.

They required more than a little luck to get there though as Buttler pressed forward to Sundar, the ball went through to Rishabh Pant behind the stumps and every Indian fielders went up for caught behind.

Buttler stood his ground though and, having used up their reviews, there was nothing India could do when the umpire remained unmoved. To add to their sense of injustice, Buttler crashed the next ball through the covers for four.

India chose not to take the third new ball and it paid off when Ishant returned and bowled Buttler (30) as the England man shouldered arms, the ball reversing nicely and hitting the top of off.

Jofra Archer went next ball, slow to get forward and he too lost his off stump, but Jack Leach kept out the hat-trick ball.

The hosts would have expected to wrap up the innings quickly but were frustrated by Bess, who kept the score moving with five boundaries, and Leach, who saw England through to stumps, with the chance to boost their total further on day three.

Follow over-by-over text commentary of day three of the first Test between India and England on the Sky Sports App and skysports.com from 4am on Sunday.