BoxingScene.com has been advised that former world heavyweight champion Leon Spinks Jr. lost his five-year battle with prostate and other cancers, at the age of 67 on Friday, Feb. 5 at 8:15 PM. At the time of his passing his wife Brenda Glur Spinks was by his side.

Due to COVID restrictions, only a few close friends and other family were present. Leon fought his battle with numerous illnesses resiliently, never losing his trademark smile.

Moments before his passing, Spinks mustered up the energy to exchange final words of affection with his son, former world champion Cory Spinks. 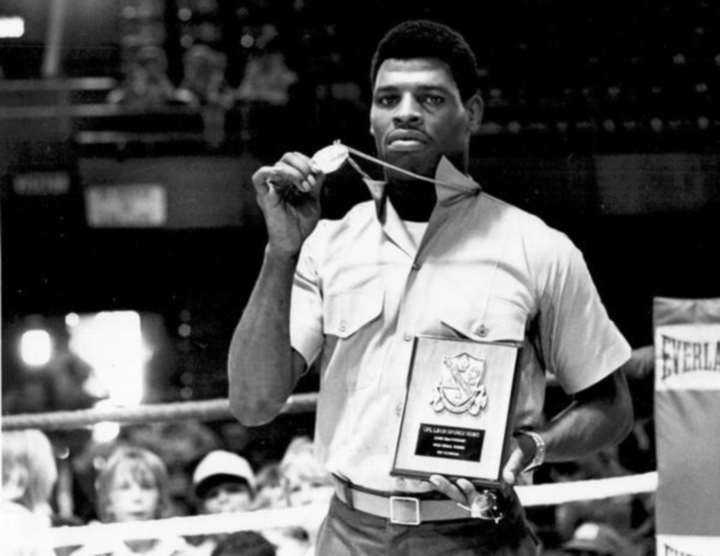 Spinks served in the United States Marine Corps, who he proudly represented when he won a gold medal in the Montreal Olympics in 1976.

But Leon truly cemented his place in history on February 15, 1978, in Las Vegas, Nevada, when he shocked the world by beating Muhammad Ali, to become the undisputed world heavyweight champion.

Born on July 11, 1953. He was born and raised in the projects of Pruitt-Igoe in St. Louis, Missouri. He discovered his passion for boxing as a young man while serving in the marines.

As an amateur boxer, Spinks won numerous medals in the lightweight division. He went on to win his first medal, a bronze, during the 1974 World Championships. In 1975, Leon earned a Silver medal at the Pan America Games. Spinks’ amateur career culminated in 1976, when he won an Olympic gold medal.

Leon’s brother, Michael Spinks won the middleweight gold medal in those Olympics. Leon’s gold medal set him up to his history making challenge of Muhammad Ali.

After moving to the site of his greatest triumph, Las Vegas in 2011, Leon became a fixture about town, always accompanied by his trademark smile. He loved spending time with friends and family, attending concerts and local shows, dining at local restaurants and signing autographs and memorabilia for fans at Inscriptagraphs and Field of Dreams on the Las Vegas strip.

Perhaps the most endearing demonstration of his popularity in town, was his 2013 surprise 60th birthday celebration, held at the former Las Vegas Hilton, where Leon defeated Ali in their first bout. The celebration was attended by numerous celebrities and a boxing dignitaries, including Leon’s brother, Michael Spinks and the legendary Jake “Raging Bull” LaMotta.

During the festivities, Leon was serenaded by Quite Riot lead singer, Paul Shortino, John Payne and the cast of the hit Vegas show “Raiding the Rock Vault.”

On the 39th Anniversary of Leon’s defeat of Ali, the formal announcement was made that Leon had been chosen for induction into the Nevada Boxing Hall of Fame. At the ceremony, Leon stood up and simply said, “it’s about time!”

In August 2017, along with his brother Michael Spinks, Thomas Hearns and Ken Norton, Leon was inducted into the Nevada Boxing Hall of Fame.