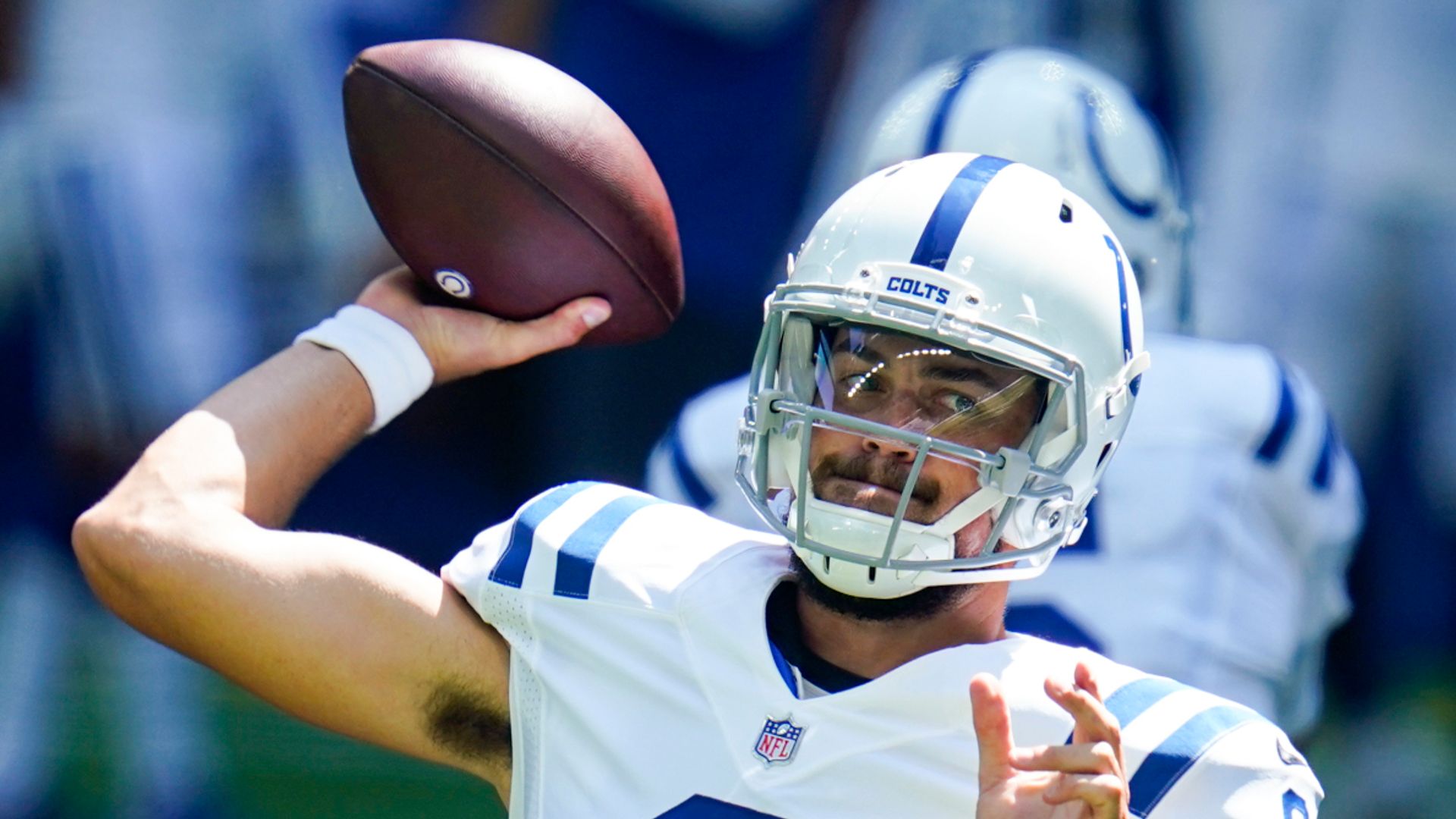 Throughout his 17-year career in the NFL, Philip Rivers garnered a reputation as not only one of the league’s elite quarterbacks, but one of the finest trash-talkers of his generation.

Regular verbal exchanges with opponents – often light-hearted – became a treasured expression of his personality, embodying everything from Rivers’ sense of humour to his fiercely competitive nature.

Jacob Eason’s rookie season entailed a front-row seat to it all as the fourth-round pick observed and absorbed the character traits and intricacies of a stout professional whose footsteps he hopes to follow in.

“Philip was very very unique in that way, it was cool to see it first hand and how he did that,” Eason joked in his chat with Sky Sports. “That brought a little energy and juice to our team as well so it was good to see some of that.”

Rivers called time on his playing days last month having led the Colts to the playoffs in his sole year with the team before eventually falling to a 27-24 defeat to the Buffalo Bills on Wild Card weekend.

Eason didn’t register a single snap in 2020 as third-string behind the 39-year-old and Jacoby Brissett, not that it stopped him from feeling the benefits of shadowing one of the most personable and accomplished mentors a player could wish for coming out of college.

“Philip was extremely consistent in how he went about his business, he was the same guy every day and I think that’s one of the things you look for in a quarterback, you don’t want somebody who is going to change,” said Eason.

“Philip was consistently the same guy every day. He brought the same attitude to work, he was happy to be there, he was hungry every day and it was cool to sit there and watch from a guy like that with that many years of experience.

“I mentioned this before, even wins and losses, those are huge in football and the way Philip handled a win was the same way he handled a loss.

“It was always right back to the basics and begin again so just being around Philip was awesome for me and it was a tremendous year to be able to learn and grow from him.”

Eason was recently tipped to be the Colts’ ‘next man up’ at quarterback by former Georgia teammate and now Super Bowl-bound Mecole Hardman.

While flattered by the support from the Kansas City Chiefs wide receiver, the 23-year-old is focused only on that which is in his control. Nevertheless, he has vowed to be ready for any opening that may present itself.

“I’m not big in the Twitter world and all of that but I had some people send it (Hardman’s comments) to me,” he said. “I love Mecole, I wish him nothing but the best this upcoming Sunday, he’s always been a guy that I love to be around too.

“In terms of the other stuff, I’m not really into discussing that right now, I’ve just got to put my best foot forward to put myself in the best possible situation and we’ll see where it goes from there.

“I don’t really pay attention to the outside noise, my mentality is to stay in my own lane and just continue to be the best person I can be.

“I’m just going to put my best foot forward and prepare for any situation, so whatever situation it may be, when the opportunity comes I want to be able to take advantage of it so that really just means focusing on my own game and my own personal growth and continuing to improve.”

The job of starting quarterback for the Colts carries familiar appeal for Eason, who grew up cumulating Peyton Manning Panini trading cards as one of many kids to have idolised the two-time Super Bowl champion.

“He was my favourite player so I had I don’t know how many sheets of his card, I had about every one I could find when I was collecting so Peyton Manning was my guy,” said Eason, on behalf of Panini America.

“Being in the position where I’m on a card is very unique, I’m fortunate and humbled to be in this situation where hopefully some little kid is picking out my card and wanting to be the next Jacob Eason, the next NFL quarterback so it’s pretty cool to be in that position.”

When that job will belong to him and whether it will ever belong to him remains to be seen, but the retirement of Rivers and Brissett’s pending free agent status has made for uncertainty under center in Indianapolis this offseason.

Moving parts have naturally thrust them into the conversation as a potential landing spot for the likes of Deshaun Watson, Carson Wentz and Sam Darnold, with neither general manager Chris Ballard or head coach Frank Reich able to commit to Eason just yet.

That is perhaps less a reflection of their regard for him, which is believed to be high, but more so a result of Eason having no preseason in which to impress due to COVID-19 and the Colts turning to Rivers to lead a win-now team to the postseason.

“It was a definitely a huge learning experience for me, from the mental aspect of the game, everything through to transitioning to becoming a professional and how to handle all of those things, it was a huge year for me,” Eason said of his rookie year.

“Mentally I learned a lot, physically I was able to get a lot of good work in even though I wasn’t able to get out there on the field on Sundays or in the preseason but it was a huge year in terms of growth and development for me.”

Besides Rivers, Eason saw another key figure in his development depart in January as offensive coordinator Nick Sirianni was appointed the new head coach of the Philadelphia Eagles, his role with the Colts subsequently being taken up by quarterbacks coach Marcus Brady.

Having faced ridicule online for a nervy introductory press conference, Siranni later delivered an insight into his own sense of humour as he joked he would go back and ‘look at the tape’, seemingly able to play down some expected jitters.

Though short-lived, Eason considers himself fortunate to have spent the time he did working with the former Chargers coach, who he is confident will enjoy success in Philly.

“I loved working with Nick,” said Eason. “He was another one of those high energy guys that brought it every day, made you want to show up to work and made you want to get involved and perform at your best level.

“It was great to be able to learn and grow from him for a year and I’ve no doubt he’ll be an outstanding head coach in Philly and I’m excited to see what he does over there.

“In terms of what I learned from him it was a whole handful, I could go on and on about the things I learned from Nick and Philip and all the guys involved in that room. Just a tremendous opportunity I had this last season to continue to learn and grow from those guys.”