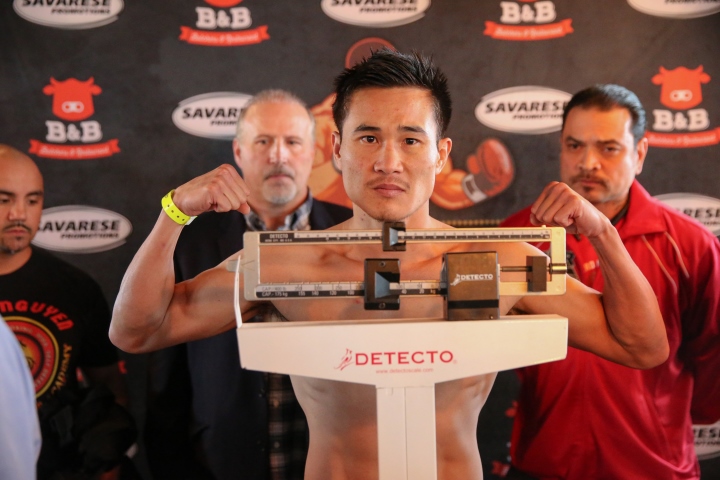 Dat Nguyen continues to enjoy the type of glory in his brief BKFC career which he was never afforded as a boxer.

Nguyen didn’t show any fear of, or respect for, Bedford’s reputations as one of the sport’s best. The former featherweight boxer took the fight straight to the champion, rocking him with a right hand and leaving Bedford staggered and with a cut at the end of round one.

Bedford punched his way back into the mix in round two, connecting with a straight right which Nguyen took well. Nguyen responded with a left hook, followed by another left and a straight right later in the round.

Following a round three marred by clinching, Bedford enjoyed his moments in round four, driving Nguyen backwards but never to the point where the threat of a stoppage surfaced.

Both fighters battled through fatigue but it was Nguyen who closed the show in the fifth and final round. Bedford spent much of the frame on the defensive, while Nguyen threw and often landed in combination.

It was enough to put an exclamation point on a title-winning performance.

“My goal has always been to win championships in three different sports,” Nguyen told BoxingScene.com. “I want to win in BKFC, back in boxing and then UFC. I have backgrounds in all three and now I have one done. I will go down in history.”

For now, Nguyen goes to 3-0 (1KO) in a sport that has breathed new life into his fighting spirit.

“Nobody gave me a shot and I proved them wrong,” stated Nguyen. “Anyone who fights me, they’re always going to get the best of me. That’s what Johnny Bedford got.”

LEBEN GOES OUT ON TOP

The final fight of Chris Leben’s career was memorable if not bizarre. Nevertheless, it ended with a win as Leben scored a 1st round knockout of Quentin Henry in their heavyweight feature.

A mere 67 seconds worth of fighting came of the bout, though extended much longer after Henry appeared to be done for the night from a freak injury. Leben let his hands go on the inside, landing with a left before poking Henry in the eye during a clinch. Henry dropped to his knees, crawling across the canvas before settling on his knees as he screamed in pain.

Once action resumed, Henry took the fight to Leben which proved to be a costly mistake. Leben—a former UFC middleweight—rode out the storm, closing the show in landing a clean shot upstairs to send Henry face-first to the canvas. The bout was stopped at 1:07 of round one.

Leben declared prior to the fight that Friday evening would be his last one as a fighter in any capacity. The 40-year old ends his BKFC run with a record of 3-1 (3KOs), while Henry suffers his first defeat in falling to 2-1 (2KOs).

Martin Brown delivered for his rabid local fans, as the 36-year old Tampa-based junior middleweight stopped Hawaii’s Zachary Zane in the second round. Brown (2-0, 2KOs) overcame a knee injury caused from both fighters stumbling to the mat in the opening round to send Zane to the canvas one round later. Zane’s corner requested to the referee to stop the contest at 1:28 of round two.

Lorenzo Hunt endured the boo birds for three rounds before giving the people what they want in the form of a 4th round knockout of Rob Morrow. The slow-moving heavyweight affair found life in round four, with both fighters letting their hands go though with Hunt getting the better of the action. Morrow was unable to solve his foe’s infighting, with Hunt picking off shots before closing the show with a left hand for the full ten count at 2:00 of round four.

John Chalbeck is now a perfect 10-0 in all pro combat sports, the latest victory coming in a 2nd round knockout of Greg Bono. Both fighters were making their BKFC debut, offering an entertaining opening round before Chalbeck dropped and stopped the spectacularly mustachioed Bono (0-1) with a right hand to end the fight at 0:28 of round two. Chalbeck enjoyed a 9-0 run as a Detroit-based welterweight before returning to his Key West roots and taking his act from the ring to the pit.

Haim Gozali proved it’s never too late to chase your dreams. The 47-year old Brooklyn-bred Isreali enjoyed a successful pro debut with a 2nd round stoppage of winless John McAllister (0-5). Gozali (1-0, 1KO) floored McAllister twice, the latter of the two enough to end the fight at 1:18 of round two.

Dillon Cleckler (2-0) made quick work of Chris Jensen (1-1), scoring a 1st round knockout in their heavyweight affair. A left hand upstairs sent Jensen reeling, leaving his fleshy midsection open for a Cleckler right hand to the liver which put him down and out at 0:34 of round one.

Taylor Starling didn’t let the sight of her own blood slow her down in busting up Charisa Sigala en route to a five-round unanimous decision in an entertaining slugfest between pro debuting flyweights. Scores were 50-43, 50-43 and 49-44 in favor of Starling, who floored Sigala in an opening round which saw both fighters suffer gruesome cuts. Sigala showed heart but just couldn’t turn the corner as Starling remained a step ahead throughout the contest.

Travis Thompson evened up his record to 3-3 (3KOs) following a 2nd round stoppage of debuting David Allen Morgan. Thompson floored Morgan (0-1) late in the opening round before closing the show at 0:22 of round two.

Jarod Grant remained unbeaten, taking out Brandon Lambert in the third round of their lightweight bout to open the prelim show on the BKFC YouTube channel. The lime green mohawked-Lambert (0-1) talked—and screamed—a good game, demanding Grant take the fight to him throughout the first two rounds. Grant (3-0, 3KOs) obliged in round three, connecting with an uppercut to put Lambert’s head in the air long enough to land a final right hand for the bout’s lone knockdown. Lambert remained down for the full ten count, coming at 1:11 of round three.