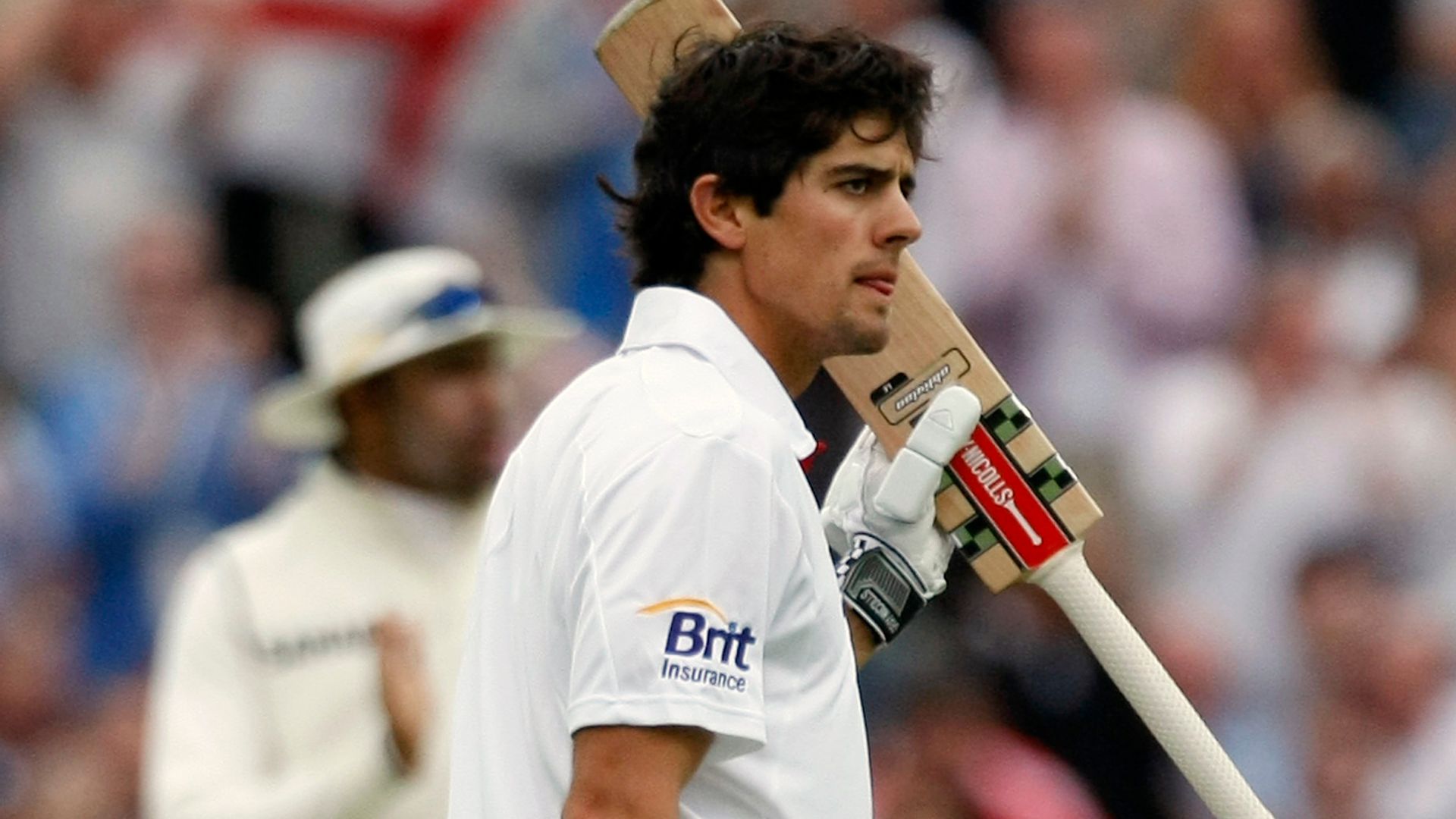 Sky Cricket’s Benedict Bermange has some top India vs England stats ahead of this winter’s series, including on Alastair Cook’s ironman performance at Edgbaston and the time Michael Atherton went from the ridiculous to the sublime in the space of two balls

Ahead of the India vs England Test series, Benedict Bermange has some killer stats from battles past, including on Sir Alastair Cook’s endurance, Bumble’s run of century stands and a Mexican Wave stopping play…

In the 1932 Lord’s Test, the first between the two countries, play started after tea on the second day at 3.28pm. Between then and the close of play, India managed to bowl 76 overs, in which time England scored 141-4.

The 44th over of India’s first innings in the 1951 Mumbai Test is unique in the annals of Test history. Bowled by Brian Statham, it ran as follows: 4,0,1,2,3,8 costing 18 runs in total to India’s two batsmen Pankaj Roy and Vijay Hazare. Hazare moved from 19 to 27 with the ‘eight’.

The fourth-wicket partnership of 222 between Vijay Hazare and Vijay Manjrekar at Leeds in 1952 is the joint-highest in Test history to include no extras.

At Delhi in December 1961, Geoff Pullar was dismissed by Kripal Singh for 89. It was Kripal’s first Test wicket which came in his 10th innings of bowling. Coming from his 651st delivery, it remains the longest wait for a first Test wicket.

At Chennai in 1964, Bapu Nadkarni recorded the extraordinary analysis of 32-27-5-0 in England’s first innings. That included 131 deliveries in a row without conceding a run, the second-longest sequence in Test history. At one stage, Brian Bolus and Ken Barrington failed to score between them for 79 deliveries.

The England team for the 1964 Mumbai Test had only 11 fit players available, the other players in the touring team being injured or ill. Shortly after the match began, Micky Stewart also fell ill, leaving the team with 10 players. On the first day, India’s AG Kripal Singh fielded for England and on the second day Hanumant Singh filled in.

In 1974 David “Bumble” Lloyd became the first player to start his Test career by sharing in three successive century partnerships. He added 116 with Dennis Amiss at Lord’s before adding 157 with Amiss and 211 with Mike Denness at Edgbaston.

At Leeds in 1979, Ian Botham scored 99 runs in the third session of play on the fourth day, moving from 9 to 108. That was repeated by Michael Vaughan, who moved from 31 to 130 in the second session of day three at Nottingham in 2002.

Having taken 6-58 in India’s first Innings of the Golden Jubilee Test at Mumbai in February 1980, Botham then proceeded to score 114 to give England a first-innings lead. Not content with that, he then bowled unchanged throughout India’s second innings, taking 7-48 in 26 overs.

At the end of the first day of the Kolkata Test which started on December 31, 1984, Ravi Shastri was unbeaten on 26. He was still on 26 at the end of the second day, on which play was limited by rain and smog to only 20 minutes. At the end of day three, he was not out on 108 and he was finally dismissed for 111 on the fourth day.

In India’s second innings of the Leeds Test in 1986, play was held up for a time due to a ‘Mexican Wave’, no doubt inspired by the Football World Cup starting three weeks earlier. Mohammad Azharuddin was obviously put off as he was dismissed next delivery!

Mike Atherton went from the ridiculous to the sublime at The Oval in 1990. Having bowled a delivery which went past the wicketkeeper to the boundary for four wides, he then proceeded to dismiss Dilip Vengsarkar with his very next delivery!

In England’s second innings in the same match, Narendra Hirwani bowled 59 consecutive overs, the longest bowling spell in Test history. He ended with one wicket for 137 runs.

At Mohali in December 2001, debutant Iqbal Siddiqui hit the winning run for India in the first Test against England. It was the last delivery he faced in his Test career.

At Edgbaston in 2011, Alastair Cook became the only player to remain on the field for the entire duration of a Test between England and India. The game finished in four days but he was on the field for 1,292 minutes and 1,861 deliveries.

The Nottingham Test in 2014 is the only Test in history in which both teams have had 10th-wicket partnerships of at least 100. Bhuvneshwar Kumar and Mohammed Shami added 111 for India’s last wicket before Joe Root and James Anderson shared a world-record 198 for England’s 10th wicket.

The umpires for the fifth Test in 2014 between the sides at The Oval – Kumar Dharmasena and Paul Reiffel – were both former Test players, the TV umpire (Tim Robinson) and the reserve umpire (Neil Mallender) were ex-Test players too, as was the referee Ranjan Madugalle. This was the first such full house.

At Mumbai in 2016, Keaton Jennings became the fourth player to score a century and be dismissed for a duck on his Test debut, but the first of the four to match a century with a golden duck.

That Test was also the first in which there were as many as five players with the same double-letter initials – MM Ali; JJ Bumrah; KK Jennings; HH Pandya; RR Pant.