It remains uncertain whether Manny Pacquiao and Ryan Garcia will meet in the ring and under what conditions should such a pairing materialize.

One aspect which has become clear is the oddsmakers once again lean towards the legend over the rising star in such a matchup.

Gambling resource site SportsBettingDime.com have inserted the 42-year old Pacquiao as a -140 betting favorite (bet $140 to win back an additional $100) over the unbeaten Garcia 20 years his junior. The 22-year old Garcia is viewed as a slight +110 underdog (bet $100 to win an additional $110) for a superlight on which he has fixated for the duration of the new year.

The odds are the latest instance where Pacquiao enjoys a role reversal from a similarly pursued challenge of Oscar de la Hoya, Garcia’s promoter whose Hall of Fame boxing career ended with a superfight versus the Filipino icon in Dec. 2008. De la Hoya opened the fight as a healthy -240 favorite, though bet down to -165 closer to fight night where the former six-division titlist—two months shy of his 35th birthday—returned to welterweight for the first time in seven years. 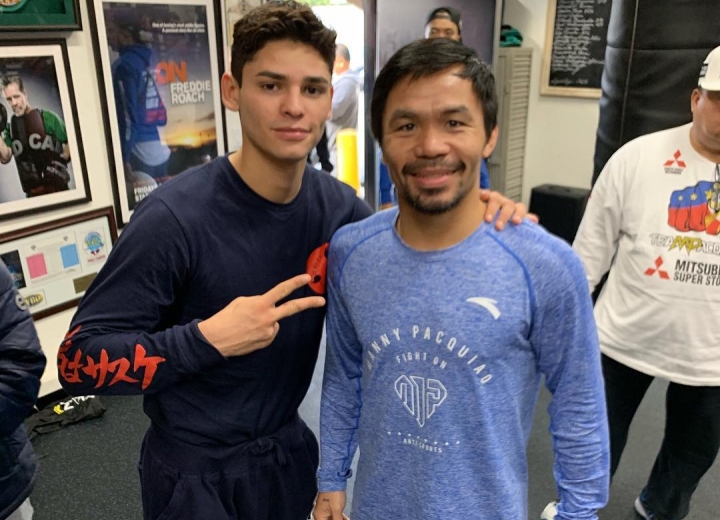 Pacquiao, 30 at the time, moved up two divisions from lightweight—where he fought just once after claiming the lineal junior lightweight championship earlier that year—to fight at welterweight for the first time. The southpaw entered as a five-division titlist and opened as a +190 underdog, bet down to +135 by fight night. He would win by one-sided 8th round stoppage, from there collecting championships at junior welterweight, welterweight and junior middleweight.

Garcia (21-0, 18KOs) has yet to win a major title, having recently netted an interim lightweight belt. The feat came in an off-the-canvas 7th round knockout of Luke Campbell this past January at American Airlines Center in Dallas. The undefeated rising star from Victorville, California has since seen his name attached to fights with Devin Haney and Gervonta ‘Tank’ Davis. Garcia called out Davis by name immediately after his latest win, only to abandon talks with both fighters to instead shift his focus and energy towards a dream fight with Pacquiao, who has been a pro since Jan. 1995.

Terms of the bout vary depending upon whom you ask, including whether or not it will actually take place.

Rumors first swirled of the bout serving as an eight-round exhibition, though both camps have since denied such talks. Garcia went on record to claim the fight will be scheduled for 12 rounds, though not specifying the weight. The most consistent suggestions among those involved in ongoing talks suggest that the fight will take place at a catchweight somewhere between 140-147 pounds.

Then there is the part where the fight might not take place at all, at least not next. So suggests Golden Boy Promotions, Garcia’s promoter who believe a showdown later in the year would represent a more realistic timetable.

Whenever the fight takes place, it seems that oddsmakers are more cautious this time around in favoring a legendary future Hall of Famer over the fighter on the rise tan the last time Pacquiao was involved in such an event.

Benavidez: Plant Doesn’t Pose A Threat To Canelo, Has No Punching Power