With by far the biggest payday of his career looming, Plant is unlikely to risk his September shot at Alvarez against anyone, let alone David Benavidez. Hearn – whose company, Matchroom Boxing, will promote Alvarez at least for the Yidirim and Saunders fights – still would prefer Plant to challenge himself versus Benavidez before facing Alvarez.

“I think that Caleb Plant is a very talented fighter,” Hearn said during his weekly appearance Tuesday on “The Ak & Barak Show,” which streams Monday through Friday on DAZN and SiriusXM. “I think he has fantastic feet. He has a very high boxing IQ. I like Caleb Truax. You know, as a guy, I think he’s a great role model for fighters. I don’t feel that they’re the kind of fights that’s gonna not only sort of prepare [Plant] for Canelo Alvarez, but also make the fight as big as it should be. We all know that that fight, again this is if [Alvarez] beats Yildirim, if he beats Billy Joe, then we know that the Plant fight would take place in September. I would love to see Caleb Plant have a real fight in between [the Truax and Alvarez fights].” 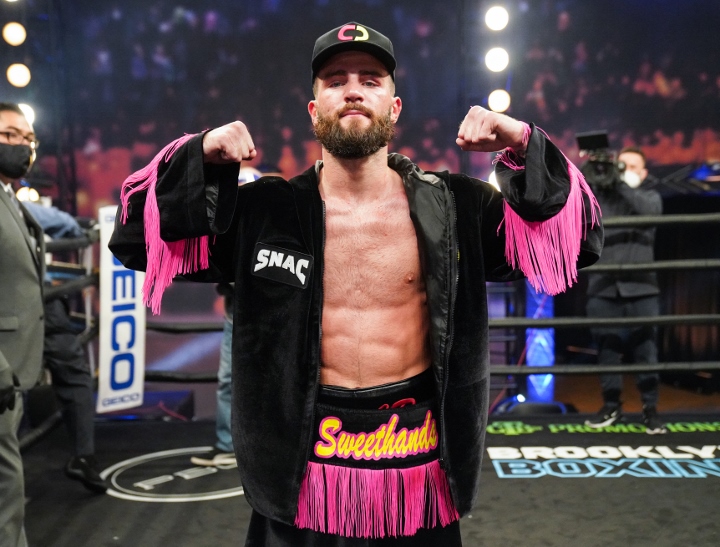 The 28-year-old Plant (21-0, 12 KOs), of Ashland City, Tennessee, dominated Truax, his mandatory challenger, throughout their 12-round fight Saturday night for Plant’s IBF 168-pound crown. Plant produced a shutout on all three scorecards and won by identical scores of 120-108, 120-108 and 120-108 at Shrine Auditorium & Expo Hall in Los Angeles.

“I actually think he’s a fantastic fighter, but let’s be honest – his resume is really, really poor – really poor,” Hearn said. “But it’s not his fault and it’s not because he doesn’t have the capability to beat top, top 168-pounders. He’s just not fighting [top] 168-pounders. So, like, in an ideal world, as a fan, I would love to see Caleb Plant against David Benavidez, you know, in May.

“And then, you know, whoever is the belt-holder fights Canelo Alvarez. I just hope that he doesn’t sit tight until that fight, you know, because I feel like that’s gonna be a huge fight, but it could be so much bigger if he takes the right steps and fights the right opponents, because he’s a great talent.”

Plant-Benavidez remains an interesting fight. Facing the dangerous Benavidez before challenging Alvarez wouldn’t make much business sense for Plant, however, especially since Benavidez lost his leverage when he was stripped of the WBC super middleweight title the day before his last fight because he was almost three pounds overweight.

Plant also suffered an injury to his left hand while defeating Truax, which could eliminate even the possibility of boxing before he could battle Alvarez in September.

Alvarez, meanwhile, is set to defend his WBA and WBC super middleweight championships against Turkey’s Yildirim (21-2, 12 KOs) on February 27 at Hard Rock Stadium in Miami. If the heavily favored Alvarez (54-1-2, 36 KOs) defeats Yildirim, he likely will box England’s Saunders (30-0, 14 KOs), the WBO champ, on May 8 at an undetermined location.