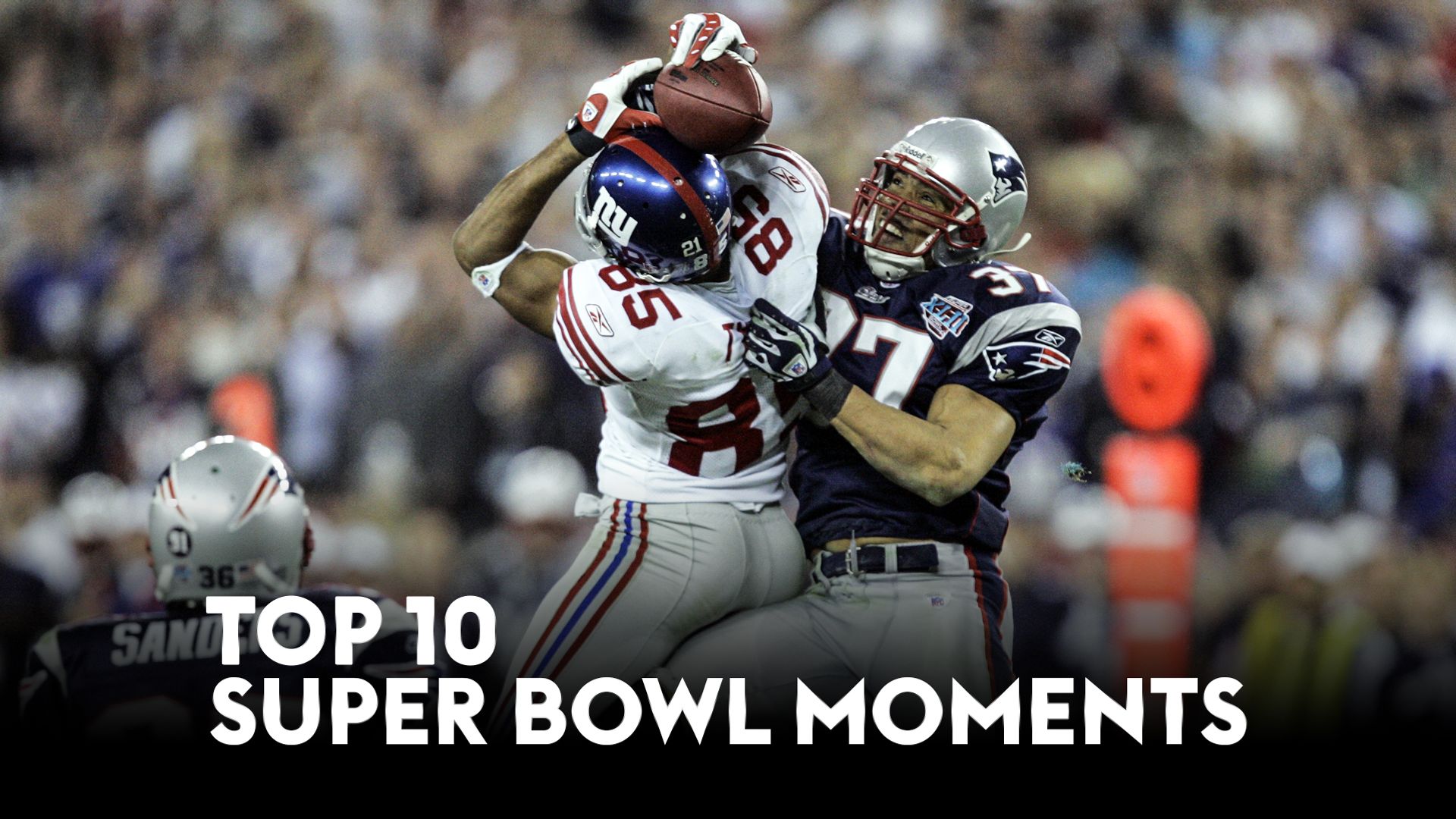 Watch Super Bowl LV between Tampa Bay Buccaneers and Kansas City Chiefs live on Sky Sports NFL (407) from 10pm on Sunday, February 7; Sky One will broadcast the game from 11pm

The outcome of a Super Bowl is so often determined by one or two key moments, someone coming up clutch in the most crucial of spots – but what are those most memorable of plays in Super Bowl history?

Ahead of Super Bowl LV between the Tampa Bay Buccaneers and Kansas City Chiefs – live on Sky Sports NFL from 10pm on Sunday – we have picked out our top 10 of the greatest moments from the biggest game in sport.

Although hard to believe, given the record six Super Bowl rings Tom Brady is now in possession of, he was enduring somewhat of a drought in the years between his third win in 2005 and this one a decade later – and it looked for all the world as though Super Bowl XLIX was to be a third to slip through his grasp in that time.

A circus catch from Jermaine Kearse had helped set the Seattle Seahawks up at goal line, trailing by four but with 26 seconds to spare – more than enough time to hand the ball off to ‘Beast Mode’ running back Marshawn Lynch for the game-winning score, right?

Wrong. In one of the craziest play-calls in football history, Seattle opted to pass, and quarterback Russell Wilson was picked off by rookie Patriots cornerback Malcolm Butler in this truly incredible finish.

It was supposed to be a procession, as the 16-0 Patriots, aiming to become the first team to go a whole season undefeated since the 1972 Miami Dolphins, took on the 10-6 New York Giants in Super Bowl XLII, but Eli Manning and company had obviously not read the script.

The Giants’ ferocious pass rush got to Brady with regularity, limiting New England’s explosive offense to just 14 points heading into the final two minutes. Manning, with the ball back in his hands, was then tasked with leading his team on a game-winning drive and pulled off the unthinkable.

The drive’s most memorable play, and arguably the greatest of all time in Super Bowl history, saw Manning somehow escape pressure from the Patriots pass rush and launch the ball down field on a prayer to David Tyree, who pulled off that catch – a stunning, one-handed grab on the side of his helmet – for a crucial 32-yard pickup on third-and-five.

A few plays later, with just 35 seconds left on the clock, Manning then picked out Plaxico Burress in the endzone for the game-winning score.

The Tennessee Titans – having recovered from a 16-point deficit to the St Louis Rams and their ‘Greatest Show on Turf’ in the third quarter – were driving down the field in the dying seconds looking for a potential game-tying touchdown to take Super Bowl XXXIV to overtime.

At the Rams’ 10-yard line, with six seconds on the clock, quarterback Steve McNair quickly got the ball out of his hands, finding receiver Kevin Dyson at the three-yard line, who seemed set to streak into the endzone.

Not so. Rams linebacker Mike Jones came up with a clutch tackle, dropping Dyson short of the goal line and the Rams held on for a stunning win.

This Ben Roethlisberger to Santonio Holmes stunner saw the Pittsburgh Steelers clinch a record sixth Vince Lombardi Trophy with a 27-23 win over the Arizona Cardinals in Super Bowl XLIII.

Pittsburgh had ended the first half up 17-7 after a title-game record 100-yard interception return for a touchdown by James Harrison, but a 127-yard and two-TD outing by Arizona receiver Larry Fitzgerald had edged them ahead by three going into the final two minutes of the game.

Big Ben wrestled the game back in Pittsburgh’s favour, however, driving the Steelers down the field and breaking the hearts of Cards fans the world over with a gorgeous ball for Holmes in the back corner of the endzone with just 35 seconds left on the clock.

Several records were set, including most combined yards gained in an NFL game (1,151), fewest punts by both teams in a Super Bowl (one), and most points scored by a Super Bowl losing team (33) in this thriller!

The most famous moment of it all was undoubtedly when Philadelphia Eagles backup quarterback Nick Foles, who had so inspired their run to the big game after the late-season injury to Carson Wentz, dialled up the ‘Philly Special’ with head coach Doug Pederson shortly before half-time.

Faced with a fourth-and-goal, on the one-yard line, with 38 seconds left in the half, the play call saw running back Corey Clement take a direct snap, pitch the ball to tight end Trey Burton, who then picked out a wide-open Foles in the right of the endzone.

It gave Philly a 22-12 lead at the break and they would hold on for a stunning 41-33 triumph over the the Patriots.

The greatest returner in the history of the NFL. That is the widely-held view of Devin Hester, who holds the record with 14 punt returns for touchdowns, to go along with five TDs on kickoff returns.

Just like the most famous of them all, this 92-yard score to open up Super Bowl XLI and stun the watching world.

All the more remarkable is the fact Hester was just a rookie on that Chicago Bears team that ultimately lost 29-17 to the Indianapolis Colts. He backed up that 2006 season, in which he had six return scores, by doubling his TD tally with another six in his sophomore season. Electric!

The Bills’ 20-19 defeat to the Giants was the first of four straight defeats in the biggest game of them all, but was easily the toughest of the lot to take – a certain defensive coordinator called Bill Belichick masterminding the Giants’ victory over the best offense in football.

Another circus catch on this list, this time working in favour of the Patriots as wide receiver Julian Edelman pulled off a gravity-defying grab in the team’s stunning comeback win over the Atlanta Falcons in Super Bowl LI.

I think we all know the story by now; New England, having trailed 28-3 midway through the third quarter, somehow turned things around and pulled off a remarkable comeback win in overtime, with Edelman playing a key role.

With three minutes and 30 seconds left in the game, New England were still down by eight and backed up at their nine-yard line, still with it all to do. Brady began to inch them upfield with a couple of completions, but then could, and perhaps, should have been picked off by Robert Alford on his throw intended for Edelman.

Instead, Alford batted the ball in the air, it fell into the arms of the Patriots wideout, who made a diving catch as it bounced off Alford’s shoe, even managing to juggle the ball further without ever losing control or letting it hit the turf.

Soon after that 23-yard completion, New England tied the game with a touchdown and successful two-point conversion, going on to win a fifth Vince Lombardi in OT.

What Brady is doing heading into his 10th Super Bowl at the age of 43 is simply remarkable. But before him, the most recent example of a quarterback scaling such age-defying heights was John Elway, reaching his then record-equalling fourth Super Bowl with the Denver Broncos at the ripe old age of 37.

The only problem was, Elway had yet to win one, being handily beaten in his hat-trick of prior visits. He was not to be denied on this occasion, though, putting his body on the line – literally – with this memorable ‘helicopter’ run in Denver’s Super Bowl XXXII win over the defending champion, and heavily favoured, Green Bay Packers.

With the game very much in the balance, tied up at 17-17 in the third quarter, the Broncos faced a third-and-six from the Green Bay 12-yard line. Elway scrambled for the first down and, in diving for the marker, he was hit so hard by the two closing Packers defenders that he spun 360 degrees in mid-air.

A few plays later, Terrell Davis scored the second of his MVP-worthy three touchdowns on the day and Denver held on to finally earn Elway the Super Bowl ring his gutsy, determined effort so deserved.

Given the upward trajectory both Belichick and Brady’s careers have taken since, it is easy to forget the Patriots were 14-point underdogs for Super Bowl XXXVI, when they took on the ‘Greatest Show on Turf’, looking to claim the first of their record haul of six rings.

Belichick’s Pats restricted the explosive St Louis offense to just three points in as many quarters until the Rams finally found some form in the fourth, scoring two touchdowns to tie the game up at 17. But step forward New England kicker Adam Vinatieri, who fired through the game-winning field goal from 48 yards out as time expired.