Nordine Oubaali has secured his next fight date and an opponent along with it.

Now all he needs is for the universe to cooperate.

The reigning World Boxing Council (WBC) bantamweight titlist is due to next defend his belt on March 13 in Paris, marking his first title fight in his home country. Oubaali will face Nawaphon Por Chokchai—a former title challenger from Bangkok—sources have informed BoxingScene.com, confirming a previous report from boxing insider Dan Rafael. Hurdles remain in place despite terms having been reached, however; the status of the event is now at the mercy of the French government and the ongoing coronavirus pandemic. 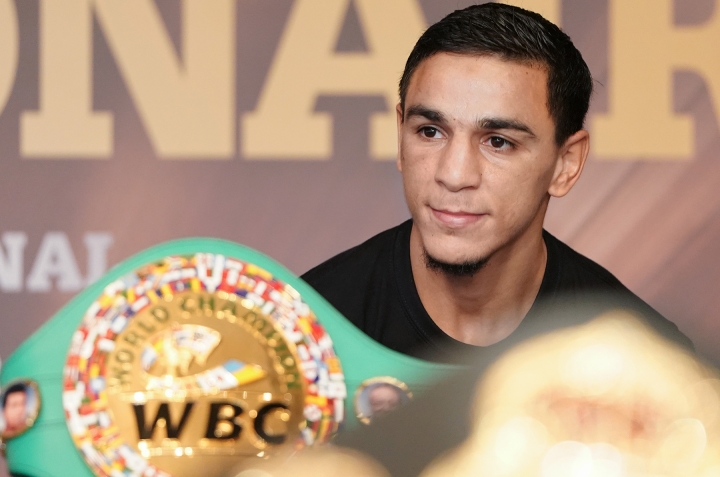 A travel restriction update was provided by French authorities on Sunday, essentially closing the borders to non-European Union countries for an indeterminate period.

“[A]ny entry into France and any exit from our territory to or from a country outside the European Union is prohibited, except for an overriding reason,” reads the statement from French officials which was issued on Jan. 31st. “Travel to overseas territories is authorized only on compelling reasons.”

The ruling was made by officials in hopes of avoiding a full-scale lockdown, which would be the third for France since the start of the ongoing global health crisis. The situation as it relates to staging this show in March is currently being addressed, with sources informing BoxingScene.com that greater clarity is expected closer to the end of the week.

Oubaali (17-0, 12KOs) attempts the third defense of the bantamweight title he claimed in a 12-round unanimous decision win over three-time U.S. Olympian and former titlist Rau’Shee Warren in Jan. 2019 at MGM Grand Garden Arena in Las Vegas. The entirety of Oubaali’s reign has taken place outside of France, after having fought exclusively at home prior to his first title fight, with the exception of his pro debut which took place in Morocco.

Following the win over Warren, Oubaali turned away the challenge of Philippines Arthur Villanueva via 6th round knockout at Barrys Arena in Astana, Kazakhstan. Five months later came his most recent bout to date, a 12-round unanimous decision win over Japan’s unbeaten Takuma Inoue in their Nov. 2019 title consolidation clash on the road in Saitama, Japan.

The aforementioned win came on the same show as Inoue’s older brother, Naoya Inoue outlasting Nonito Donaire over 12 rounds to win the World Boxing Super Series while unifying two titles. Donaire’s brave performance was rewarded by the WBC with a shot at Oubaali, only for the bout to suffer multiple delays due to the ongoing coronavirus disease.

Oubaali and Donaire were finally due to meet on Dec. 19th, only for both fighters to eventually test positive for COVID-19. Oubaali was temporarily declared “Champion in Recess” while allowing replacement foes Emmanuel Rodriguez and Reymart Gaballo to compete for the interim title. Gaballo claimed a disputed 12-round split decision, a verdict which was questionable enough to prompt the WBC to order a rematch.

The ruling allowed Oubaali to not only have his title reign restored but for the sanctioning body to permit a voluntary title defense before re-entering talks for a mandatory title fight with Donaire.

That led to settling on Por Chokchai (50-1-1, 40KOs), a 29-year old contender currently riding a 14-fight win streak. His lone career defeat came in a 3rd round knockout of Juan Hernandez Navarrete in their March 2017 junior flyweight title fight. Among the notable wins for Por Chokchai, include a stunning 5th round stoppage of countryman and former flyweight titlist Amnat Ruenroeng in April 2018 and sending veteran spoiler Sonny Boy Jaro into retirement following a 7th round stoppage win in May 2019.

Por Chokchai saw his career begin with a four-round draw versus then winless countryman Srisaket Sor Rungvisai (0-2 at the time) in Sept. 2009.

Regarding his current win streak, Por Chokchai will considerably step up in class versus Oubaali, assuming their fight still takes place. Securing P1 travel visas are a common practice though more difficult to obtain in a timely fashion since the pandemic, along with having to wait out the French government to determine when its borders will re-open.

All visitors to France are also required to produce a negative PCR test within 72 hours of entry.