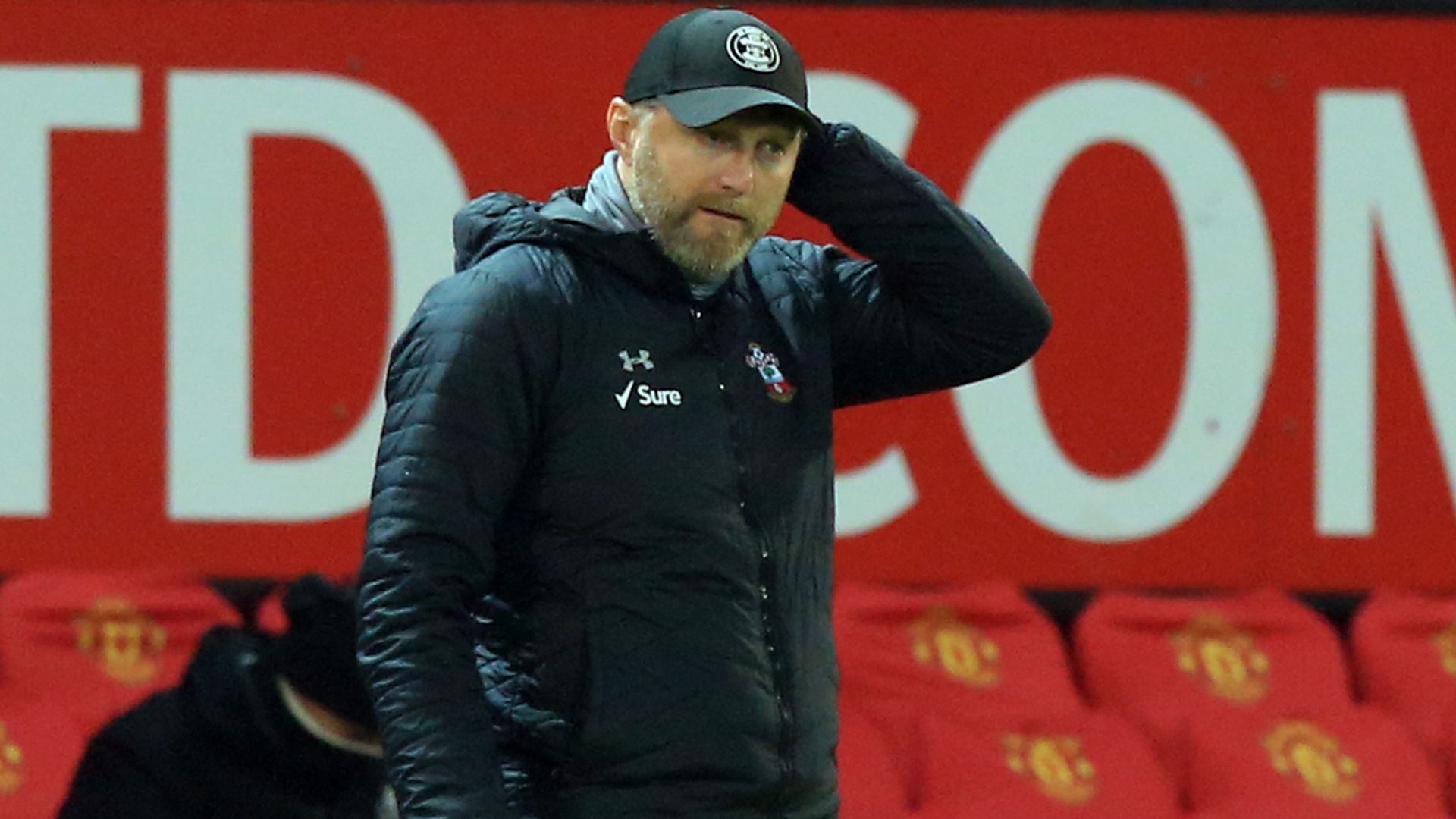 Hasenhuttl’s side were once again on the receiving end of a record-equalling Premier League defeat as Manchester United ran riot over Southampton, who played with 10 men for the majority of the game, and ended with just nine.

Alex Jankewitz’s red after 79 seconds gave Saints a mountain to climb, and they were 6-0 down thanks to goals from Aaron Wan-Bissaka, Marcus Rashford, Jan Bednarek (own goal), Edinson Cavani, Anthony Martial and Scott McTominay by the time Bednarek saw red for a controversial last-man challenge.

Bruno Fernandes (pen), Martial again and Dan James completed the 9-0 win, and although Hasenhuttl says his side are in a better place than they were following the defeat by Leicester in October 2019, he said the defeat hurts more.

He said after the game: “We lost in a horrible way, and 90 minutes can be long in the Premier League. We couldn’t help them from outside. In the end, it’s a little bit of a different situation [to the 9-0 defeat by Leicester] because we are in a position in the table where we haven’t been for a long time.

“You don’t need this result to know what we need to do better. It’s not that it hurts less [than the last 9-0], the opposite, it hurts even more when you get this result again, but the team is a different one now.

“The team is a different one now, that’s the reason we’ve played a good season so far. Let’s see how the season ends, it will end better than the last I think.

“It hurts, but I can’t change it any more. It happened. The only way for us to go on is to show that we are a better team that we showed today.

“I can take this result in a different way because I know this team is working well, we have had fantastic games. When nights like this happen, when you are one man down after two minutes, what do you expect?

Hasenhuttl did, however, admit he had memories of the 9-0 defeat by Leicester in his mind as the game wore on, saying: “I’m sure it enters their [the players] minds. I cannot deny that I didn’t have it in my mind. It’s like this.”

He also told BT Sport: “Yes [it is a nightmare night], it’s tough when you lose a player after three minutes against such a team. It’s already tough to compete here, let alone with one man down.

“We’ve played a very good season so far and nobody expected that such an evening would come today. There were no signs, and this doesn’t reflect what we have given so far this season. It’s hard to explain what is going on in my mind, but we have to live with it again.”

‘I don’t know what to say to Jankewitz’

Jankewitz, just 19, was making his full Premier League debut on Tuesday night, and saw red for a horrific high tackle on McTominay. When asked about the youngster’s actions, Hasenhuttl admitted he didn’t know what to say to him.

He told BT Sport: “I don’t know what I can say to him, the guys were helpless on the pitch after his immediate sending off. Then it’s gone very quick and you know the 90 minutes can be very long. Afterwards nobody speaks about the first or second player sent off, the result is there, and we have to live with it again.”

He said in the post-match press conference: “It’s a young player who has to learn a lot, but today it was a horrible start for him.”

Ole: Front players got their mojo back

The game saw Martial return to the scoresheet after seven without a goal, while Rashford and Cavani got just their second goal in nine games.

Solskjaer was delighted to see his front players back in goalscoring action, and praised his side for “playing properly” throughout.

He told BT Sport: “We have been waiting for them [the front players] to show the magic, and tonight was the night for them to go and enjoy, we haven’t had too many of them.

He then said in his post-match press conference: “What I liked about the performance was the hunger and attitude to do the right things, get better and better, practice the good habits, and that’s the only way we can improve and get better.

“You can see loads of things we were working on; but we don’t want to be predictable, we want to be a bit unpredictable, and that has to come from the players. The freedom, creativity and imagination was there. The performance was positive and something we can look at – of course you have to look at them having 10 men, but it’s never easy playing against 10 men either.”

Cavani and the in-form Luke Shaw were brought off at half-time, but Solskjaer insists both substitutions were precautionary.

On Cavani, Solskjaer told BT Sport: “Cavani was good but he got a bad tackle on his ankle, so there wasn’t any point taking risks. Hopefully it wont swell up too much.

On Shaw, he said: “He has played really well. Of course we have Alex [Telles], who can cover for him and play well also, but the way Luke plays at the moment, with intensity, high speed running, and the spaces that appeared for him, you run the risk if you keep doing that of getting injured. We wanted Anthony, Donny [van de Beek] and Dan [James] to come on, so they were the changes we made.”

Man Utd now host Everton on Saturday in the Premier League, live on Sky Sports Premier League at 8pm, before hosting West Ham in the FA Cup fifth round on Tuesday at 7.30pm.

Southampton go to Newcastle on Saturday at 3pm in the Premier League, before a trip to Wolves in the FA Cup fifth round on Tuesday at 5.30pm.