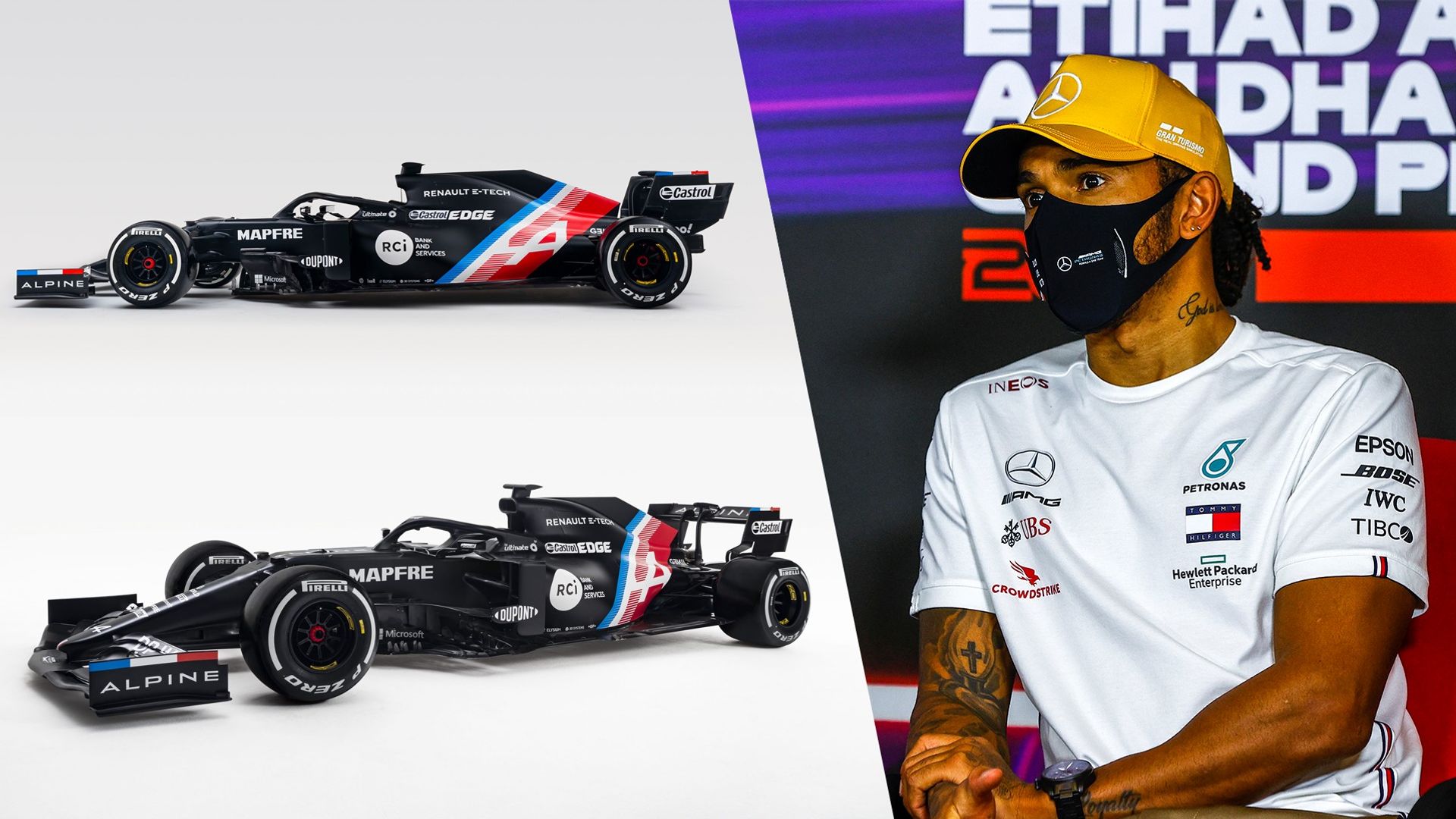 Formula 1 2021 is nearly go with car launches in February before pre-season testing and the opening race in March – but what are the big winter talking points, and the big stories you might have missed?

Aston and Alpine give a taste of what’s to come

And while Aston and Alpine will officially start their F1 journeys, and reveal their liveries, at their team and car launches over the next month or so – both have already teased plenty at the start of 2021.

Aston Martin, the iconic British brand who are returning to F1 after a 60-year absence, have taken over the Racing Point team and – alongside the confirmation of new title partner Cognizant – hinted at a, as expected, green car design ahead of a full reveal at the start of March.

The team have delivered punchy statements via owner Lawrence Stroll and team principal Otmar Szafnauer – the latter declaring they are aiming to become a “top team”, and fast – while star signing Sebastian Vettel has also settled into life with Aston, completing his seat fit (with a new look…) ahead of partnering Lance Stroll this year.

Alpine, meanwhile, will be a lesser-known name for many – but Renault, who will be performing under the name of their performance sub-brand this season, hope not for long.

A “Renaulution” has been proclaimed as Alpine leap into the sporting spotlight, with a new logo revealed and a car colour scheme teased – albeit only as a ‘temporary winter livery’ before the brand new A521 is launched later this month.

There have also been plenty of changes behind the scenes, with long-time Renault F1 boss Cyril Abiteboul unexpectedly leaving the team altogether. Laurent Rossi has been confirmed as Alpine’s CEO, with respected ex-MotoGP team boss Davide Brivio arriving as sporting director.

They will hope to lead Alpine F1 to a successful 2021 – armed with returning two-time world champion Fernando Alonso alongside Esteban Ocon after Daniel Ricciardo’s exit.

The Hamilton contract wait goes on…

We’re less than two months away from the start of the season and the sport’s seven-time world champion, and most glittering driver, is still technically a free agent. That’s the unprecedented situation Lewis Hamilton and Mercedes find themselves in as we enter February!

Hamilton’s Mercedes contract expired at the end of last season and while the reasons for the delay to talks last year were understandable (concentrating on racing, etc), they do not exist now and driver and team still haven’t come to an official agreement. So what’s the latest?

Well, reports have varied throughout January – some claiming Hamilton is requesting too much money, some that he is actually asking for less, but more bonuses – but Mercedes have remained relaxed about talks and still absolutely expect to thrash out a new deal in the coming weeks.

I’m trying to find the right balance in cardio and strength building. On top of that, lots of work ongoing in the background. Many moving parts but just checking in to let you know I’m doing good, I’m healthy and mentally strong right now in my bubble…

The biggest winter update from Hamilton came via social media as he referenced “many moving parts” behind the scenes, while Mercedes’ public message appeared last week from team boss Toto Wolff as he stated: “He’s in America now and I’m here. At some point we will finalise it (the deal).”

Wolff added to Austrian broadcaster ORF that they had been “sending curveballs to the lawyers” – although he is understood to have meant new areas to explore arising from the contract negotiations rather than unexpected obstacles.

Anyway, it still sounds like this saga will be over soon. Although we have been saying that for a while!

While the 2021 calendar was ‘confirmed’ last December there were always likely to be alterations due to the Covid-19 pandemic, and we already have a revised 23-race calendar for the season.

Gone is the season-opener in Australia – with the Melbourne race pushed back to November – with Bahrain now set to host the first race on March 28. That change also means pre-season testing is set to take place in Bahrain rather than Barcelona.

The Chinese GP, meanwhile, has disappeared from the calendar completely for now, with Imola – after a successful return to the schedule last season – added in its place. A ‘TBC’ event, potentially in Portugal, is slated to be the third race of the campaign at the start of May.

We also have new start times for the season, with F1 reverting to traditional race times on the hour rather than ten-past, as has been the case in the previous three years.

And there is a big change in terms of Friday practice, with both sessions now only an hour long rather than 90 minutes.

Star drivers settle in with their new teams

There have been plenty of transfers up and down the grid for F1 2021 – with all the top seven teams from last year, bar Mercedes, changing their line-ups – and drivers have already been settling into their new surroundings.

Most notably, Sergio Perez has visited the Red Bull factory, the aforementioned Vettel has been to Aston Martin while Carlos Sainz has even driven a Ferrari, albeit a 2018 car.

Sainz said his day testing at Fiorano was a “dream come true”.

AlphaTauri rookie Yuki Tsuonda has also been driving in Italy, testing his team’s 2019 car at Imola.

And what else is new?