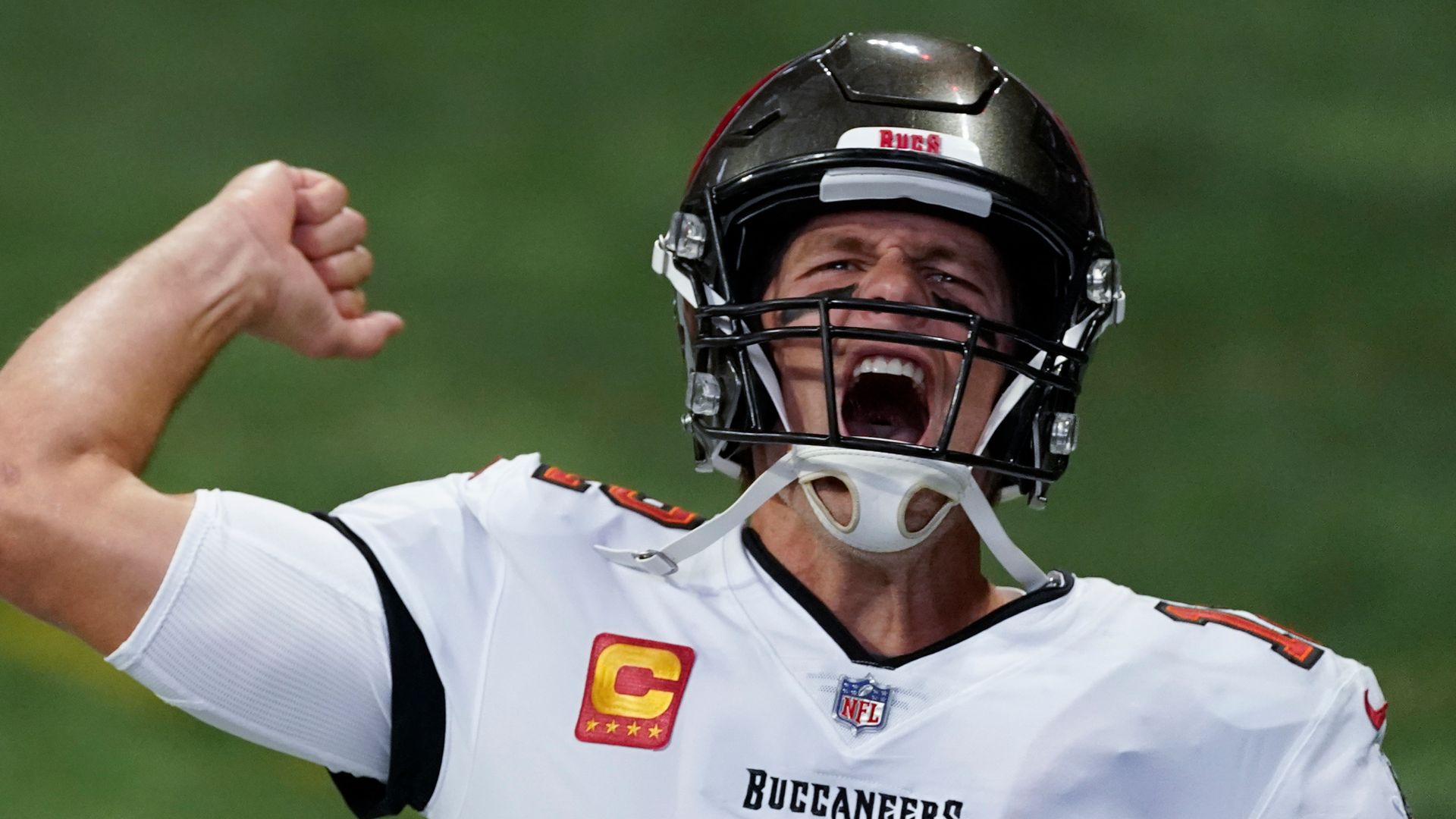 The Tampa Bay Buccaneers finished the regular season 11-5 and second in the NFC South before beating Washington, the New Orleans Saints and Green Bay Packers to reach the Super Bowl, where they will face the Kansas City Chiefs. Watch Super Bowl LV live on Sky Sports NFL this Sunday

Well, they did it. He did it. The Tampa Bay Buccaneers and Tom Brady are Super Bowl-bound.

Bruce Arians’ Bucs will become the first team ever to play a home Super Bowl on February 7 as Tampa’s Raymond James Stadium plays stage to their matchup with the defending champion Kansas City Chiefs.

Having arrived as THE story of 2020 free agency, Tom Brady will be vying for his seventh ring as undisputed greatness is pitted against the absurd talent of Patrick Mahomes. It’s not been all about the storied quarterback, though.

The Brady experiment paid off. It was always reliant on not only the six-time Super Bowl winner’s own production, but also reliable and sustained protection for him in the pocket, and the Bucs got both.

First-round offensive tackle Tristan Wirfs enjoyed a phenomenal rookie year, while across from him veteran left tackle Donovan Smith delivered when it mattered most on Brady’s blindside, left guard Ali Marpet and center Ryan Jensen were two of the nastiest opponents in the league on the interior and Aaron Stinnie fit in seamlessly at right guard after replacing the injured Alex Cappa. The Bucs’ offensive line ranked second in the regular season in sacks-allowed-per-pass play at 3.51 per cent, with Brady being sacked just 21 times all year.

As for the man at quarterback, he didn’t hang around in making this Bucs offense his own. A turning point came in October when he was awarded NFC Offensive Player of the Month having became the oldest quarterback to throw five touchdowns in a single game to fend off Justin Herbert and the Los Angeles Chargers, thrown for four touchdowns as well as running in another to overcome the Las Vegas Raiders, and rounded off a rampant defensive performance against the Green Bay Packers, during which Aaron Rodgers was sacked four times and intercepted twice.

He made a key contributor out of the lesser-known Scotty Miller, combined with his Pro Bowl receivers Mike Evans and Chris Godwin for 1,846 of his passing yards and found familiar joy in throwing to Rob Gronkowski, who arguably exceeded expectations as a threat in the passing game following his return to the NFL. Alongside diminishing doubts over his veteran arm strength in Arians’ deep-ball offense, he also helped the Bucs offense rank third overall in scoring.

While their quarterback flourished, Todd Bowles’ defense was ferocious, ranking sixth overall (including first against the run) and finishing with a sixth-most 25 takeaways (15 interceptions, 11 fumble recoveries) and a fifth-most 48 sacks.

Shaquil Barrett, Jason Pierre-Paul and Devin White were unwavering disruptors, Ndamukong Suh an immoveable object against the run and Antoine Winfield Jr. and Carlton Davis impactful leaders in a secondary labelled as one of the Bucs’ weaknesses heading into the season.

For all its firepower and while taking nothing away from Brady’s overall success with it, the Bucs offense stalled at times. And it happened to occur on bad days for the man under center.

The loss to the Rams was a prime example of the team’s occasional struggle to move the ball as they saw eight drives end in either a punt, turnover on downs or an interception, while averaging just 2.3 yards on the ground. They also crawled over the line against the New York Giants in a Week Eight contest they probably should have lost.

Inconsistency on the ground was a hindrance for much of the campaign, with the Bucs averaging 94.9 rushing yards per game in the regular season (tied-28th) and surpassing 100 yards rushing in just seven outings. Nonetheless, Leonard Fournette has looked to remedy that in the postseason with 313 scrimmage yards and three touchdowns across three games.

Brady’s career-worst 38-3 defeat to the Saints underlined the Bucs’, albeit few, deficiencies in one swoop. Their quarterback’s 40.4 season-low passer rating came up against a then-season-high 46 per cent pressure rate after a rare down day for Tampa’s offensive line, the Bucs abandoned the run prematurely as they finished with eight rushing yards from five carries, a teething secondary was out-schemed and out-manoeuvred and a usually-frenetic pass rush was non-existent.

Barring the odd bad game, and there really weren’t many, Brady has been largely surgical this season and a defining reason as to why Tampa are heading back to Tampa. But it would be wholly unjust to overlook a Bucs defense loaded with playmakers.

Linebacker White has been a do-it-all staple of Bowles’ fierce and flying front seven, racking up nine sacks in the regular season to go alongside a team-high 140 tackles, including 18 for loss.

His influence carried on into January as he intercepted Drew Brees with seven minutes to play to set up Brady’s decisive touchdown run in the Bucs’ Divisional Round win over the Saints. The Pittsburgh Steelers visibly felt the loss of fellow 2019 first-round linebacker Devin Bush during the season, and you suspect White’s absence would have been a similarly crushing blow.

Let’s also give some due credit to general manager Jason Licht. Besides winning the coveted Brady lottery in the offseason, he oiled the perennial champ’s arrival with the offering of a Gronkowski reunion, the tight end eventually proving more of a factor in the passing game than many expected after a year out, as well as bringing in his old friend Antonio Brown, whose ability to dominate one-on-one matchups hasn’t disappeared.

Licht addressed a leaky secondary by picking up safety Winfield Jr. in the second round of the NFL Draft, handed Brady arguably the top-performing offensive tackle of the 2020 class in Wirfs and supplemented 2018 second-round running back Ronald Jones with Fournette, who flashed his talent against with his tremendous spinning touchdown run against the Packers. He also made crucial moves to retain 2019 sack-leader Barrett and the still-dangerous Pierre-Paul.

The Bucs overcame an inspired Taylor Heinicke on Wild Card weekend as Washington’s backup quarterback pushed them a little too close for comfort in their eventual 31-23 victory.

Brady benefited from outstanding pass protection early on to orchestrate a commanding and defining start for Tampa, finishing the game 22 of 40 passing for 381 yards along with 36 and 27-yard touchdown passes to Brown and Chris Godwin, respectively. The Bucs totalled 507 yards on offense on the day behind Evans’ six catches for 119 yards and Fournette’s 19 carries for 93 yards and a score.

A gruelling day for Brees saw the Bucs avenge their two regular season defeats to the Saints by walking out of the Superdome 30-20 winners in the Divisional Round. The future Hall of Fame quarterback saw two of his three interceptions punished with touchdowns, before his third with 4.25 to play and the Saints trailing by 10 allowed the Bucs to run down the clock.

Facing the Packers at Lambeau Field in his 14th Conference Championship game, Brady delivered a stellar first half iced by a late 39-yard touchdown pass to Miller to capitalise on a rare Rodgers interception and give the Bucs a 21-10 advantage at the break.

His day then threatened to be ruined by three second half interceptions, only for the Packers to turn just one into a touchdown while being held to no points by Bowles’ outstanding defense on the other two occasions. Trailing 31-23 with 2.05 to play, Green Bay bizarrely opted against going for it on fourth down and instead settled for a field goal as the Bucs proceeded to chew down the closing minutes.

Tampa Bay’s one and only Super Bowl appearance to date ended in triumph as they rounded off the 2002 campaign with a 48-21 victory over the then-Oakland Raiders behind head coach Jon Gruden, who had previously led the Raiders from 1998 to 2001 before being traded to the Bucs ahead of the season in exchange for two first-round picks, two second-round picks and $8m.

NFL Films footage famously captured Bucs defensive back John Lynch explaining to his teammates that the majority of the Raiders’ plays on offense were those Gruden had prepared them for, while Oakland also ran with the same signal calls that Gruden had introduced.

Tampa Bay safety Dexter Jackson was named game MVP after accounting for two of three interceptions on Oakland quarterback Rich Gannon, who threw a Super Bowl-record five picks as well as being sacked five times. The Bucs led by as many as 34-9 in the third quarter, Brad Johnson finishing with two touchdown passes to Keenan McCardell and running back Michael Pittman, the father of Indianapolis Colts wide receiver Michael Pittman Jr., rushing for 124 yards off 29 carries.

It was the fifth time in six years Tampa had reached the playoffs having been eliminated on Wild Card weekend in 2001 and 2000, lost in the 1999 NFC Championship game and fallen in the Divisional Round in 1997 under Tony Dungy. The spell came on the back of a 14-year postseason drought.

Will they make it two for two in the big game come Sunday?

For 90 minutes of Super Bowl LV build-up from Raymond James Stadium with Kirk Cousins, Dallas Clark and Cliff Avril, join us on Sky Sports NFL, Main Event and Sky One from 10pm on Sunday, February 7.