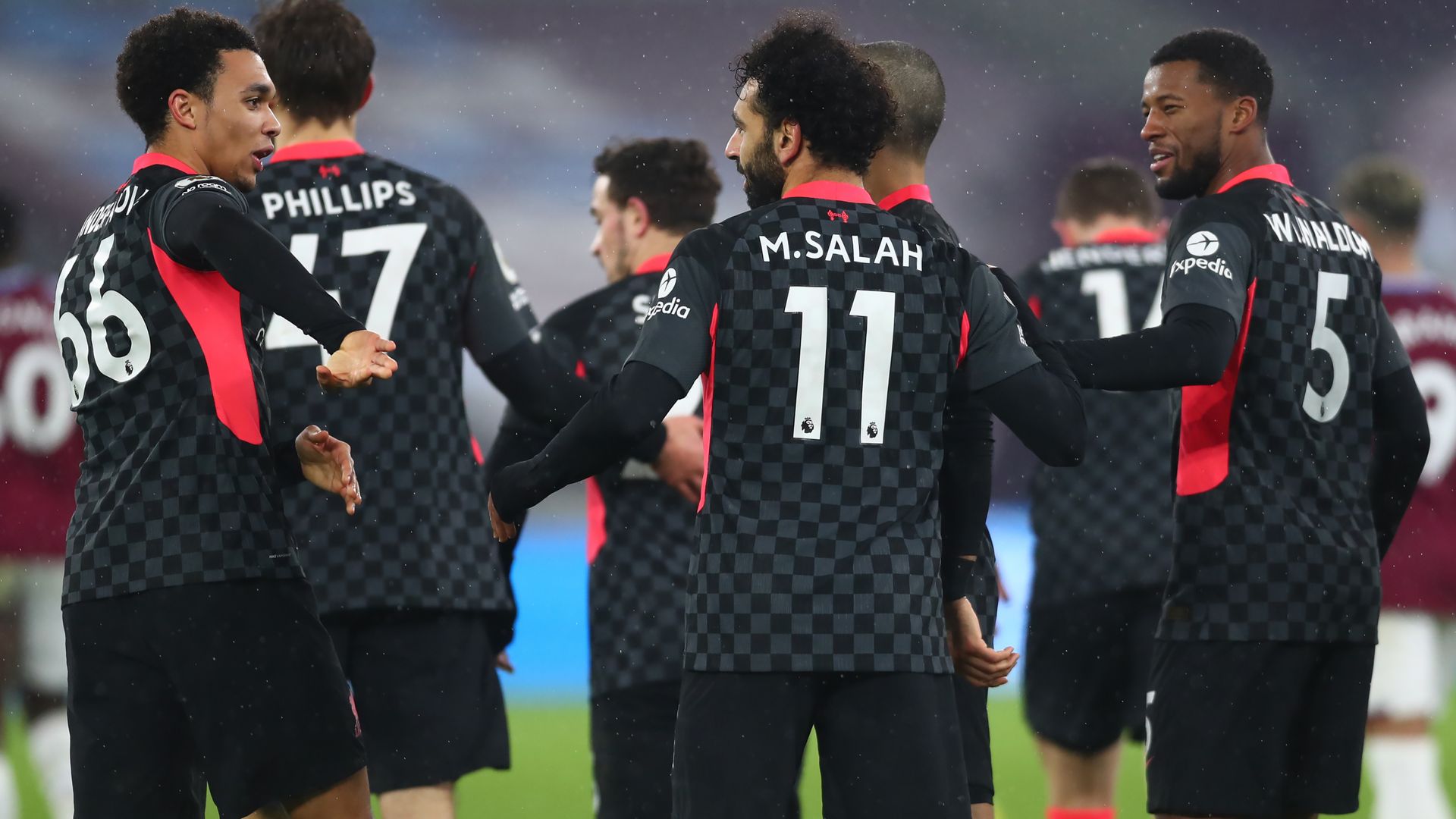 Hope for the Liverpool defence

Without Sadio Mane in the Liverpool squad for the first time since the 7-2 defeat to Aston Villa in early October, the onus was on Mohamed Salah to produce. He did just that. The Egyptian’s two goals – both wonderful in their own way – propelled Liverpool to a deserved 3-1 win over West Ham at the London Stadium. The title defence is back on.

Salah had gone six Premier League games without scoring but there had been three goals in the FA Cup during that time and there was always a sense that they would return. After all, he now has 15 of them in the league this season – three more than any other player.

While Liverpool’s recent attacking problems felt temporary, the lingering concern has been that the injuries in defence will inevitably undermine them eventually. It has to be said that they are coping admirably thus far. Jordan Henderson and Nat Phillips were excellent again.

Michail Antonio would have been excited by the thought of running at Phillips but the centre-back coped well with the threat. Henderson, meanwhile, was so impressive once more than Jurgen Klopp revealed afterwards that James Milner had joked with the captain that he might end up stuck there. He has been assured in the role.

Although the pair had played the second half together at Tottenham on Thursday, this was Liverpool’s twelfth different starting centre-back partnership of the season so far. And yet, only Manchester City have conceded fewer goals since that curious night at Villa Park.

The lack of depth is a concern, of course, and that explains why Klopp is looking to the transfer market to bolster his options before the transfer window closes. But despite the late goal conceded against West Ham, this was another encouraging evening. If the forwards start firing again, there is hope for Liverpool’s defence – in more ways than one.
Adam Bate

Thomas Tuchel is up and running with his first win as Chelsea boss and there were clear signs of improvement on the drab midweek draw with Wolves. Against Burnley, Chelsea showed more purpose with their possession, with Callum Hudson-Odoi and Mason Mount, in particular, driving them forwards, while there were no scares at all at the other end.

But as Tuchel noted afterwards, his team’s finishing needs work – and it will have to be a priority for him. It’s a problem which stretches beyond Timo Werner’s agonising personal drought, which has now run to a dozen Premier League games after another blank.

Chelsea’s shot conversion stats rank them ninth in the Premier League this season. An Expected Goals table published just before Frank Lampard’s sacking suggested Chelsea were majorly underperforming based on the quality of the chances they were creating. This is more than just one misfiring forward.

Just eight of their 19 shots against Burnley found the target, with Mount culpable for wasting his four efforts at goal, while Tammy Abraham, who has been sporadic in front of goal, was taken off at half-time.

Instead, it was left to defenders Cesar Azpilicueta and the recalled Marcos Alonso to show the attackers how it’s done. There is quality in their forward ranks but they must be more clinical if they are to compete with the best sides in this division on a consistent basis under Tuchel.
Peter Smith

Tired Burnley must gather themselves to go again

After a brilliant week for Burnley, in which they ended Liverpool’s long unbeaten run in the league at Anfield, thrashed Fulham in the FA Cup and then edged a thriller with in-form Aston Villa, Sean Dyche’s side were brought back down to earth by a dominant Chelsea side on Sunday.

Burnley began with confidence on the back of their recent wins but couldn’t land a glove on their hosts at Stamford Bridge. It wasn’t until the 94th minute of the match they managed a shot, with James Tarkowski heading harmlessly over – and by that point Chelsea were two up and had the points in the bag.

Burnley managed just 95 passes in the second half (compared with Chelsea’s 393) and there was a sense the visitors were worn down by the Blues’ control of the contest. Perhaps the exertions of that winning run took its toll, too. Certainly, Chris Wood’s injury hinted at that, while in-form Jay Rodriguez began on the bench to avoid overload after his own recent return from the treatment table.

Manchester City come to Turf Moor on Wednesday, so life doesn’t get any easier for Dyche’s men. The recent result over Liverpool is a reminder Burnley can still unsettle the big teams on their day but with fellow strugglers Brighton at home next Saturday, Dyche may have to prioritise and rotate where he can to ensure his side are back like their best selves for that key clash.
Peter Smith

‘Is Patrick Bamford a Premier League striker?’ – it’s a question we should no longer be asking.

His man-of-the-match show in Leeds’ 3-1 win at Leicester was a statement – one goal and two assists, one of which was an unselfish show of character, laying the ball on a plate for Jack Harrison.

It’s no surprise that most of Bamford’s goals have come against defences that sit slightly higher or are known for giving you a few glimpses of goal.

One against Liverpool in their basketball match on the opening day, one against Fulham before their defence got their act together, another against a hapless Sheffield United, three against a Villa side who let their guard down looking to score, and a gift at Chelsea, to name just a few.

He does struggle more against a lower block, with less space to work, but which striker doesn’t?

Bamford is the perfect outlet – tall, with the strength to hold the ball up, and most importantly, clever. His goal against Leicester was brilliantly fired into the top corner from what looked a tricky angle.

Eleven goals in 20 appearances is a fine return for a Premier League striker, but there is far more to Bamford’s game. As Marcelo Bielsa said after the match: “He thinks more about the team than his result.”
Gerard Brand

Leicester still not the same without Vardy

Speaking to Brendan Rodgers before Leicester’s game against Leeds, he had been a picture of positivity when discussing the challenge of being without their star striker Jamie Vardy.

“I have always tried to show the players here that trust. It is our job collectively to find an answer. Of course, if you don’t have Jamie Vardy on that last line, when he is arguably the best player in Europe at timing those runs in behind, then logic tells you that you are going to miss that. But can you find another way? That is the challenge.”

It proved a challenge too much for his team as they were beaten 3-1 by Leeds at the King Power Stadium on Sunday. Rodgers was left unhappy with the three goals that his team conceded. When you let in that many there is no guarantee that Vardy, now 34, would have made any difference. But his absence at the other end of the pitch was still felt.

Ayoze Perez was tasked with filling the void but endured a difficult afternoon. Kelechi Iheanacho, an unused substitute here, has had plenty of opportunities to impress. Neither man has convinced that they have the quality to shine when the spotlight is on them.

Leicester are still well-placed within the top four and the hope is that Vardy will return soon to add fresh impetus. But one points from six without him is a reminder that even as Rodgers evolves his style and adds new dimensions, one man remains irreplaceable.
Adam Bate