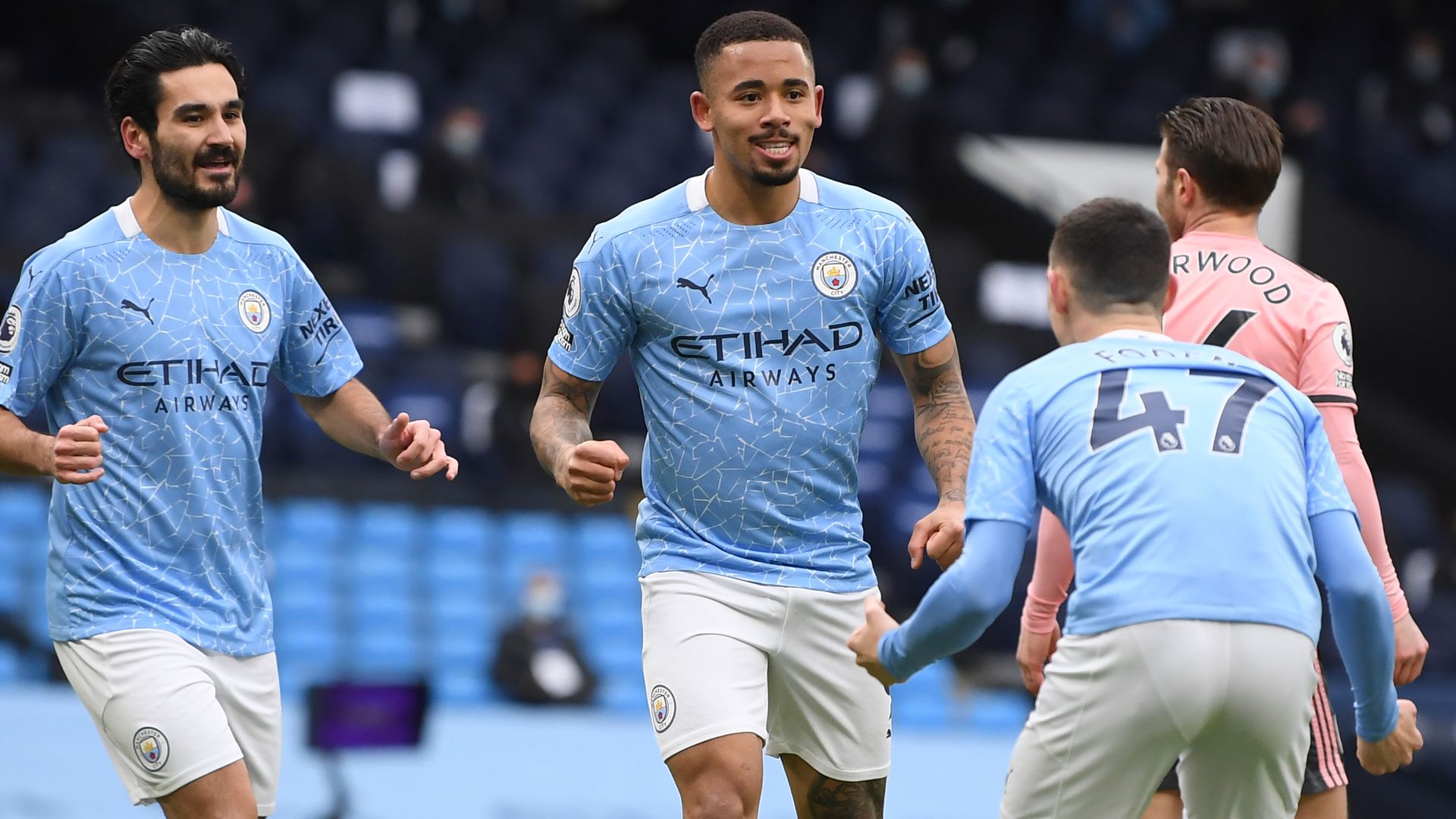 Opta released a quite astounding stat in the wake of Man City’s latest victory. It read: City’s nine wins across all competitions in January was the most by a team in the top four tiers of English football in a single month since the formation of the Football League in 1888.

No wonder Pep Guardiola described his players as “animals” after their 1-0 win over Sheffield United. They are relentless.

The games have been packed in over the past 30 days. City have been hit by absences of key players, too. But while those around them at the top of the Premier League have tripped up, City just keep on winning.

It is a club-record 12 in a row across all competitions now, with Saturday’s latest success making it eight on the spin in the Premier League, where they now sit commandingly at the summit.

While Guardiola was keen to talk up Sheffield United, it was clear the creativity of Kevin De Bruyne and finishing of Sergio Aguero was missed at the Etihad Stadium. But then, which team would not be weaker without those Premier League legends?

The point is, whatever challenges City face – from opponents to injuries and illness – they just keep motoring on right now. They find a way.

There is little time to reflect on their landmark winning streak – they are back in action against Burnley on Wednesday, when they will be aiming to get February off to a flyer. Then comes what feels like a pivotal test against Liverpool.

If the winning run is still alive by the end of next weekend, it is hard to see who will stop City from reclaiming the Premier League crown.
Peter Smith

Energy, creativity and, most importantly, guts. That is all Newcastle fans wanted to see. They saw a season’s worth at Goodison Park.

Pressing higher up the pitch, it looked a naive move in the first 25 minutes as Everton, helped by James Rodriguez, broke through on several occasions. But from then on, Newcastle constricted Everton and had control of the game. It is not often we have said that about Steve Bruce’s side.

Callum Wilson was the star – he scored two and could have had five, played wider on the right to much success. But Miguel Almiron’s tireless energy set the tone from the front, running more than any player on the pitch (11.5km).

Newcastle did everything that Everton failed to do. While Carlo Ancelotti was bemoaning his side’s lack of fight – “We were lazy, we were slow and we were not focused” – Newcastle ran more and sprinted more.

Bruce inferred this had been coming, with the effects of Covid seemingly wearing off and giving Newcastle some spark. That may well be the case, but it felt the tactical switch was equally as important.

Now Newcastle fans will want to see more of it. They have been crying out for a bolder, attacking approach for months, and believe they have the players to do it.
Gerard Brand

Is Diang the game-changer for Allardyce?

Sam Allardyce will need to buy the admin staff at West Brom a bottle of champagne after they managed to get Mbaye Diagne’s registration submitted in time for him to feature against Fulham. The on-loan Galatasaray man, signed on Friday, was not quite ready to start but his arrival from the bench completely changed the game in West Brom’s favour. They were lucky to be even in the game at that point after Fulham’s silky play had left them seeing stars in the first 45 minutes.

Diang looks very well versed in leading the line on his own, something Allardyce wants from his central striker. His physicality gave Jerome Anderson much more to think about after the break as his clever hold-up play and movement down the channels laid the platform for the West Brom turnaround.

As seen for the second West Brom goal, scored by Matheus Pereira, where Diang powered his way down the right before crossing for his team-mate to finish.

He will give Allardyce hope that the great escape might be achievable.
Lewis Jones

Wolves are in a bad place. Nuno Espirito Santo’s side are bottom of the form table in the last eight Premier League games, a period in which the Midlands club have taken just three points. Their woeful run was extended in south London as Ebere Eze’s dazzling strike was enough to secure a 1-0 win for Crystal Palace.

“A lot of things are missing,” Nuno said afterwards. “Better performances, better decisions, what is our identity. Everything must be faster. A lot of passes were sideways, not taking risks.

“It is not about individuals, it is about all of us and we must commit more to face the challenge we have in front of us. We have a big challenge and we have to improve and improve fast.”

Nuno is unfamiliar with such an alarming run of results at Molineux since the start of his stewardship, and the Portuguese’s warning for his players must now be heeded.

Wolves have not tasted success in the division since December 15 when they beat Chelsea and while they have progressed into the FA Cup fifth round, in the top flight they continue to look toothless.

It took them until the 56th minute to have a shot on target at Selhurst Park and although new signing Willian Jose looked sharp on his full debut, Wolves have slumped to 14th.

Sheffield United are still adrift at the bottom but are improving, while Newcastle’s victory over Everton will have them looking over their shoulders. They are not yet embroiled in a relegation battle, but results and performances must improve – starting with the visit of Arsenal on Tuesday.
Ben Grounds

For all of Wolves’ recent troubles, this was a much-needed win for Roy Hodgson’s side. Crystal Palace entered the game with just two league victories from their last 12 games, against the division’s bottom two, and while they were thankful to Vicente Guaita’s smart reflexes during the second half, this was a deserved win as their greater courage was rewarded.

The authority Wolves demonstrated in securing two seventh-placed finishes is nowhere to be seen right now, on a run of eight games without a win, but it was a moment of brilliance from Ebere Eze which ensured they were usurped in 13th place by Palace. It was a special goal, Eze’s third of the season, and a clinical strike that was enough to the job.

The victory might have been more handsome had Wilfried Zaha kept his shot down instead of rattling the crossbar, but this win certainly lifted Hodgson’s mood with his side comfortable in mid-table, 12 points clear of the relegation zone.

Eze had been rather subdued prior to his match-winning moment, and he said: “It’s been a long time coming. It’s not been going for us but today we’re grateful to win. We always put in the work and try to do the best we can but it hasn’t come off at times. It’s been a difficult run but we’ve put it right today.

“With the quality we’ve got in our team, we always know we’re capable of creating chances. I just saw the ball roll across the box, tried to create a bit of space so I could get my shot off. Now, we want to be looking up the table, getting points on the board and climbing up as fast as we can.”

Creativity, speed and breaking the lines are problems Wolves have to solve, but with Eze on board, Palace have those qualities in abundance.
Ben Grounds

Blades can take heart ahead of Baggies showdown

There was to be no repeat trick for Sheffield United across the Pennines, just days after the shock of the season at Old Trafford, but despite a narrow defeat at the hands of the Manchester City machine, this was further evidence Chris Wilder’s side remain, as Pep Guardiola put it, “alive”.

City’s dominance in possession and territory was predictable but Guardiola, whose side had managed only three shots by the break, feared a tricky assignment and so it proved.

Wilder will rue the slapdash nature of the goal that proved decisive, Bernardo Silva allowed to impossibly wriggle from Jayden Bogle and Ethan Ampadu between a misjudged header and a marker’s lapse.

But he will take heart from their resilience and application, from a series of fine saves that should boost the confidence of a previously fragile-looking Aaron Ramsdale, from the steadily more adventurous play of John Fleck – who went close to punishing City late on – and Oliver Norwood in midfield.

If any outside suspicions lingered that this team might have settled for its fate, this was a week in which those were emphatically dispelled.

“We’re not looking to get pats on the back but you’ve seen a team there that’s fighting for their lives,” an energised Wilder said afterwards.

“There is a manner, a body language and an identity and I think we are showing that, getting that back. I feel we’ve got plenty left in us.”

Galvanised by an FA Cup run, Sheffield United are stirring.

Their biggest Premier League test – West Brom at Bramall Lane on Tuesday – awaits and it should be a showdown to relish. Two trips to Manchester have set the mood.
Kate Burlaga