Carlos Takam has revealed an awkward exchange he had with unified heavyweight world champion Anthony Joshua prior to their clash in 2017.

Takam came in at 12 days notice to challenge Joshua after then IBF mandatory, Kubrat Pulev, pulled out following an injury. Takam was stopped after 10 rounds at the Principality Stadium in Cardiff. 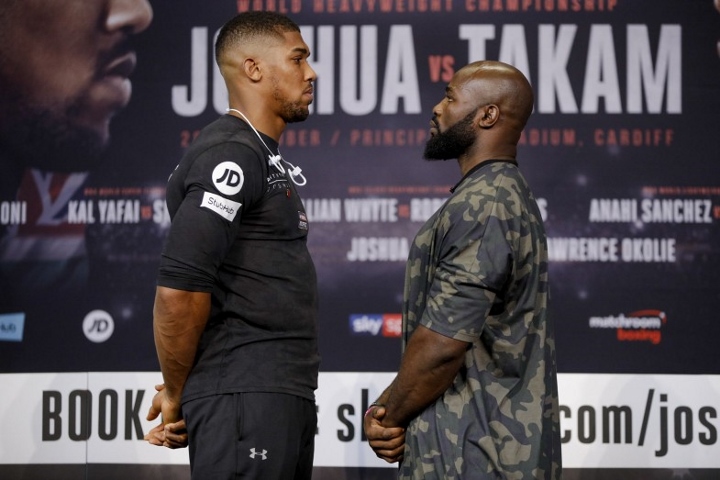 After initially turning down the fight, the 40-year-old revealed that he accepted the opportunity after seeing comments he thought were said by Joshua on social media, only to find out when he confronted the Brit that they were in fact not said by him.

“I spoke with my trainer and he said ‘yes, Carlos 10 days [is] too short’ and I said ‘ok whatever, ‘ok call my promoter and tell him we’re not going to take that fight,” Takam told Pro Boxing Fans.

”And then I was in the social media, in the internet, I saw the comments. Everybody was speaking like ‘yes, who is that guy Carlos Takam, Anthony Joshua opponent [he’ll] put him down in two or three rounds.

“It pissed me off! I called my coach and said ‘listen, let’s do that fight, I want to see who is that guy, let’s do that fight.’ [I did] two or three times of sparring, he said ‘are you sure Carlos?’ I said ‘let’s go, that guy has two hands like me and two feet like me, I don’t see who is going to put me down in three rounds, that is crazy!’

“The first time when I saw Anthony Joshua, I said ‘I hear something in the internet, you told people, you told the media you’re going to put me down in three or two rounds, is that true?’

“He looked at me and said, ‘I never said something like that’, I said ‘sh-t, I already signed the contract for the fight. Ok let’s do that fight, boy!”