A single tweet which brought forth boxing’s first-ever all-Caleb title fight continues to serve as a point of contention between this weekend’s headlining participants. 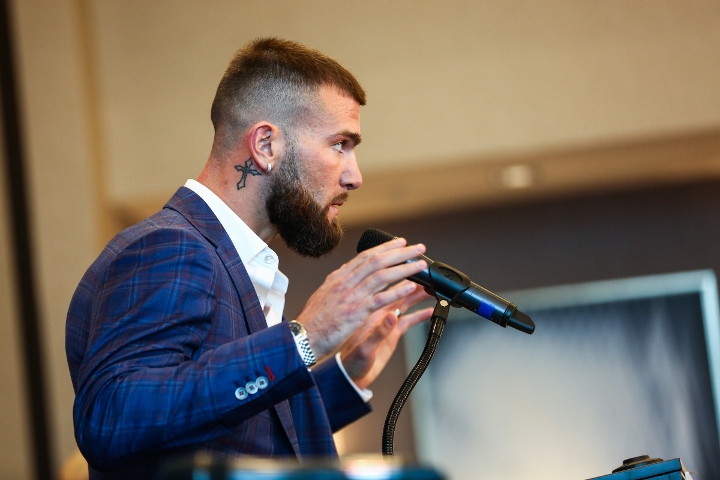 Five years ago this month and just two miles away from Saturday’s location housed the fight which drew the ire of Truax, who had harsh words for his upcoming opponent. Plant was 11-0 at the time of his Jan. 2016 clash with Adaset Rodriguez, whom he stopped inside of six rounds in their FS1 preliminary bout. Truax’s viewing interest came in the form of the evening’s main event, featuring fellow Minnesota native Jamal James. In awaiting a friend, he instead gained a new enemy after expressing disinterest in what he saw of Plant’s performance.

“[One] round in and I already hope Caleb Plant gets knocked out,” Truax tweeted in real time.

The wish was never granted, as Plant has yet to hit the deck through 20 pro bouts. The Tennessee native—who now lives and trains in the greater Las Vegas area—is good-hearted by nature but easily finds a way to carry a chip on his shoulder heading into any fight. On this occasion, it’s a blast from the past which fuels his angst.

“It’s something that’s definitely been a motivating factor,” Plant admitted during Thursday’s final pre-fight press conference, which was held virtually via Zoom. “With only 11 fights for me and for wherever he was in his career (26-2-2 at the time and a former middleweight title challenger), for him to hope that I get knocked out or only room for one Caleb—whatever silly shit he was saying.

“Instead of wishing for someone else to knock me out, why don’t you step up and do it? That’s big talk coming from someone who had as many fights as you had while I only had 11 fights. Why would someone like me be on your radar at a point like that. Now, the tables have turned.”

Truth be told, Truax (31-4-2,19KOs; 1ND) never thought much of the casual comment at the time. As fight night draws nearer and Plant (20-0, 12KOs) continues to address it, the former titlist greater embraces the moment.

“I remember why I tweeted,” recalled Truax, who outpointed James DeGale to win the title in a massive upset in Dec. 2017 before losing the belt in a rematch four months later. “He was in the ring with a guy had no business being in the ring with him. I didn’t like the way he was showing him up. I was cheering for the other guy. It was a long time ago. The great thing about boxing is that we get to settle it in the ring.”

Naturally, that sparked a new debate.

The development made the job of PBC host Ray Flores that much easier, as his conjuring up the 2016 incident helped spark and further along a tasty debate.

“I just gotta get in there, get the work done and win,” insisted Truax. “I don’t have to show nobody up, man. Especially with a guy who had no business being in the ring with you.”

“How many guys [have] you been in the ring with that had no business being in there with you,” Plant questioned, to which Traux confessed to there being plenty of occasions in his career, “Exactly. But just because you can’t do those things, don’t mean you need to be hating on me that I can do those things. Because I’m gonna show you up the way I’m gonna show him up.

Plant enters as a hefty betting favorite, while the most generous odds have Truax coming in as a +1200 underdog according to SportsBettingDime.com. Plant was a slight underdog in his title winning effort over Jose Uzcategul in Jan. 2019—which also took place in Los Angeles—but was overwhelmingly favored to tear through overmatched challengers Mike Lee and Vincent Feigenbutz.

The secrets to Plant’s success are never taking shortcuts in training camp and treating every opponent as if they are a threat. In order to have an enemy, you need a reason to carry that level of disdain. It’s clear that such a reason has been found and will be carried into the ring on Saturday night.

“I get to go in there and make him rethink talking about me like that,” vows Plant.

As far as Truax is concerned, the magic he created in England in his first fight with DeGale can be replicated this weekend.

“I want to win, man,” states Truax. “Any way it takes. That’s how I approach all my fights. I just want to win. I don’t care how it goes.”
Naturally, the defending titlist needed the last word.