Edinson Cavani’s work rate and movement sets the standard for his Manchester United team-mates. Should he start ahead of Anthony Martial at Arsenal?

Martial might count himself unfortunate to have seen a goal ruled out against Sheffield United following an infringement by Harry Maguire but Manchester United’s first Premier League defeat in almost three months still leaves him under scrutiny.

The French forward was preferred to Edinson Cavani at Old Trafford on Wednesday evening but was unable to add to his total of just two Premier League goals this season. Cavani has twice as many in the competition despite starting four games to Martial’s 14.

The build-up to the game had featured glowing praise from Ole Gunnar Solskjaer for the 33-year-old Uruguayan. The reactions of his team-mates during the win over Liverpool last weekend had alerted the world to the fact that Cavani has become a leader at the club.

The cameras picked up on Mason Greenwood listening intently as Cavani gesticulated to him, signalling what runs to make. Afterwards, Bruno Fernandes credited his winning free-kick goal to the advice of Cavani, who had encouraged him to strike the ball to Alisson’s left.

Given his age, the striker had been seen as a desperate deadline day signing for Manchester United, an afterthought hinting at the poor planning that had hampered their preparations.

But Cavani has since overcome a difficult start that included a three-game suspension for a breach of FA rules in relation to a social media post and the frustration of seeing United struggle in those early weeks of the season as he edged towards full fitness. Everyone is impressed now and the goals tell only part of the tale.

“I think we have a lot of leaders,” said skipper Harry Maguire when challenged on that subject earlier this week. “There are definitely a lot of leaders in the dressing room.”

Cavani certainly leads by example but is that example being heeded? “It is not just going to happen by itself,” said Solskjaer when discussing what his other forwards can learn.

The United boss went on to praise Greenwood for working closely with his more experienced team-mate – “learning good habits” – something the player has discussed too.

“You could tell the second he came here,” said Greenwood. “The stuff he does, the way he dresses himself, the way he trains, the way he does everything right as a footballer, really.”

On the pitch, Solskjaer has speed in his attack and real talent too but nous in the penalty box has not always been evident. Cavani has demonstrated that it is not some sixth sense that he possesses. His success in front of goal is a direct result of his hard work.

Both goals in his game-changing contribution off the bench against Southampton in November were headers made easy by his willingness to gamble on the ball reaching him.

“For me, it is his movement really,” added Greenwood. “I have never seen a striker do as many movements. He does probably the same movement six or seven times a game, like the one against Southampton, he does that every day in training.

“He scored two from doing the exact same thing. It is good to see a high-level striker at the club you can take note of.” 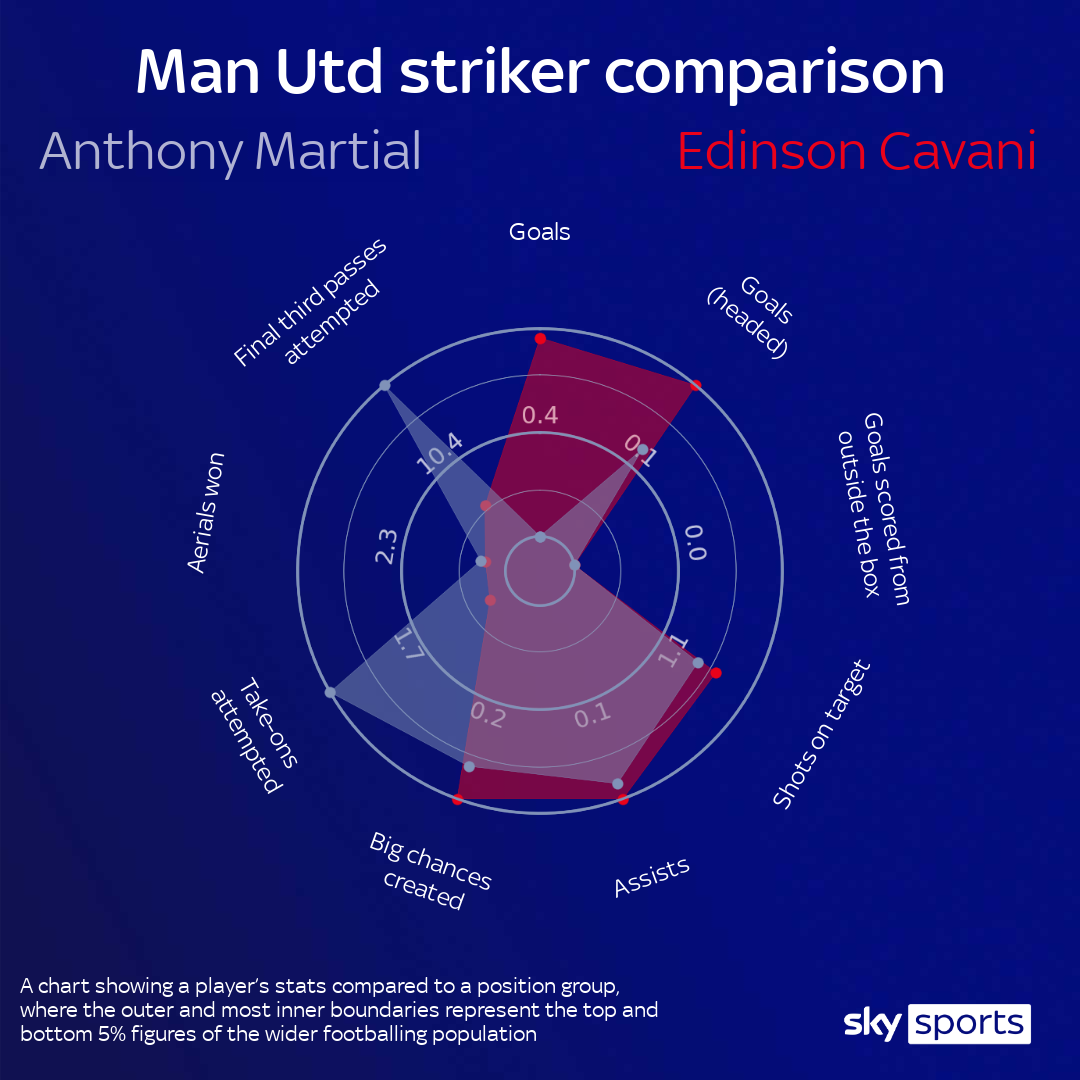 And yet, it is Martial who is most conspicuously in competition with Cavani. The other forwards – Greenwood, Marcus Rashford and Daniel James – are used more often in the wider positions. It is Martial, 25, who most needs those Cavani qualities.

“He is there as a mentor,” said Solskjaer. “They have all got things to learn from Edinson and the more humble and hungry you are to listen the better you will become. Edinson has been in every single position to score a goal or to win the ball back throughout his career and there is so much for them to learn off him.”

Note that Solskjaer mentions Cavani’s ball-winning qualities. After that Southampton game, he highlighted the fact that his striker was “top of the tree” in the running stats.

Even when scoring 17 goals last season, Martial was criticised for falling short in these areas. He does not have that same appetite to defend from the front, setting the tone for the team, and he does not make those same runs inside the box to engineer space.

In contrast, Cavani is a master at it.

“What does he bring? How long have we got? What he brings is when a striker of that age runs almost 12 kilometres,” Solskjaer said. “He chases down every time the centre-back has got the ball, every time the goalkeeper has the ball, tackles on centre-midfielders.”

According to the Premier League tracking data, Cavani is not quite running 12 kilometres per game but the numbers still show the difference that he makes in that centre-forward role.

It is true that Cavani has been restricted to shorter bursts from the bench, as was the case against Sheffield United when he came on midway through the second half. But this does not entirely explain his dynamism. He has run more when playing the full 90 minutes too.

The first time that Cavani played a whole Premier League game for United was in the win over Wolves when he ran 10.95 kilometres – the most by any United striker this season. Against Burnley, he ran 10.54 kilometres and against Fulham it was 10.41 kilometres.

Martial is yet to run 10 kilometres in any game this season. He has only run more than nine kilometres in a Premier League game on three occasions. It is a key point of difference.

Ideally, one suspects that Solskjaer’s long-term hope is that Cavani can have an influence on Martial’s game. If he can add some of those qualities then he will be better of it. But that does not solve the problem of who should start up front against Arsenal on Saturday.

Cavani’s recall to the starting line-up could be imminent – and his manager has already helpfully listed many of the reasons for that when talking up his impact at the club this week.

“His reaction, his work rate and his habits and his threat in the box and the humility of coming in every single day to do your best. We could go on and on and on but his experience and attitude of course. It has given us a lesson, every single one of us.”

It is a lesson that Anthony Martial still needs to learn.