Boxeo Telemundo is back—and this time in front of a live audience.

The 2021 season premiere of Boxeo Telemundo is set for March 5, with Puerto Rico’s Yomar Alamo returning to the circuit for the first time in a year. The unbeaten junior welterweight will face Mexico’s Jesus Beltran (17-3-2, 10KOs) in a scheduled 10-round regional title fight live from Osceola Heritage Park in Kissimmee, Florida. 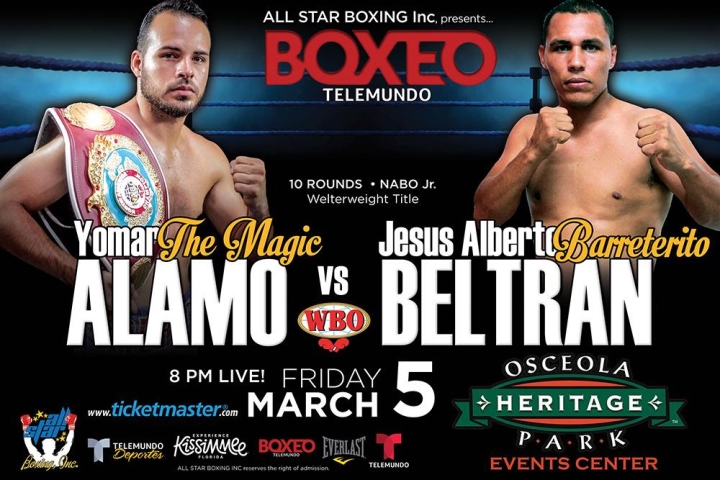 The Central Florida venue was used throughout the pandemic for the Telemundo 2020 summer and fall seasons, though with all eight shows taking place behind closed doors. That will no longer be the case, though social distancing measures are in place to ensure the safest possible environment—this time with a return to rabid crowds back in attendance.

“It will feel good to see the fans be able to enjoy the fights from ringside once again,” Felix ‘Tutico’ Zabala, owner and president of series promotional outfit All Star Boxing Inc. told BoxingScene.com. “We sacrificed four shows last year because we knew it wasn’t safe to come back (last spring) and did the rest of the year without crowds in order to get our fighters back in the ring.

“This year, we will continue to monitor the pandemic as we hope to be able to increase the number of people permitted on site to enjoy the shows.”

The venue will permit up to a 50% total capacity, with all entrants required to submit to on-site health screenings and comply with COVID regulations including face masks to be worn at all times.

As for the ring action, Alamo (18-0-1, 12KOs) makes his way back into the ring for the first time since last Feb. 28th. The occasion came in front of a packed house at OHP, where he outlasted unbeaten Kendo Castañeda in a 10-round majority decision. The upcoming fight will mark his fifth straight at this venue and sixth in a row in the Orlando-Kissimmee region.

“I am excited to be back in the ring in what feels like my 2nd home and with my people cheering me on again,” insists the 25-year old Alamo, who hails from Caguas, Puerto Rico. “2021 will be my year; after this fight, I [will be] ready for the bigger challenges.”

Beltran fights for the first time since July 2019, when he dropped a 10-round decision to unbeaten Derrieck Cuevas atop a Telemundo show in Hollywood, Florida. The 32-year old from Los Mochis, Mexico has dropped his last two starts, though both coming his optimal weight as he returns to the 140-pound division.

“In my last fight on Telemundo I gave up too much weight, which cost me the fight,” admits Beltran, whose more famous cousin Rey Beltran is a former lightweight titlist. “I have been training hard since the new year, now I’m back to my original weight class where I feel strong.

“The only goal I have in mind is to bring the title back to Mexico!”

The March 5 show is the first of three consecutive Fridays for the Telemundo spring season. Following the March 12 and March 19 cards will come a season recap on March 26.