Former WBO featherweight champion Oscar Valdez is less than a month away from the most dangerous fight of his pro career.

Berchelt believes Valdez has a flaw with his chin – and he plans to check it hard for a knockout win.

In March 2018, Valdez suffered a broken jaw during a tough win over Scott Quigg – and he has been dropped in other contests. 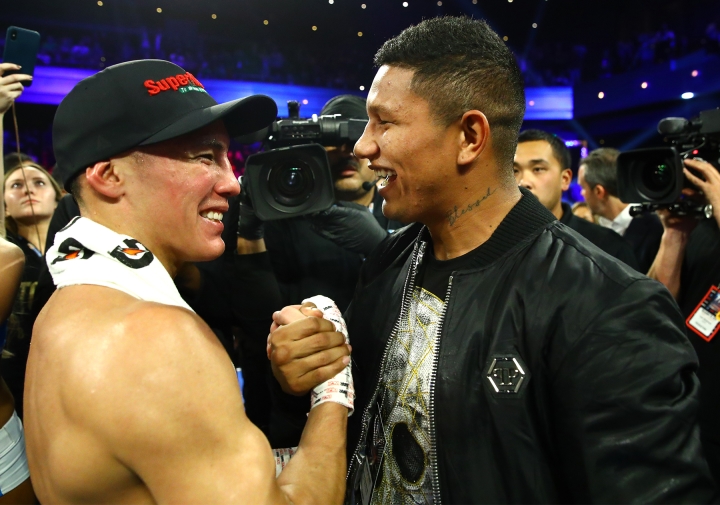 Valdez believes a knockout ending could just as easily go in the other direction.

“Berchelt says he is going for the knockout, I’m not going to crack, but the knockout could show up for the other side. It will be a tough fight but not impossible… in my corner is my father and Eddy Reynoso. When two Mexicans get into a ring there is always going to be a show. I am in the position to provide a good fight,” Valdez told Javier Cordoso.

“During history, a lot of Mexicans have given great fights like Julio César Chávez, Erik Morales, Juan Manuel Márquez and Ricardo ‘El Finito’ López. I dream of being a WBC champion, I train in parks and wherever I can, sometimes running, but I try to prepare as good as possible.”

For the championship fight, the corners will play an important role: Eddy Reynoso in the corner of the two-time Olympian and Alfredo Caballero with Berchelt.

Valdez and Berchelt have been friendly and know each other from the amateurs – but they won’t be friends when they steps in the ring.

“Caballero is a great trainer, but this is not a fight between trainers, it is not Caballero going against Reynoso, it is Miguel Berchelt against Oscar Valdez. In this fight here, friendship goes out the window and losing is not an option for me.”