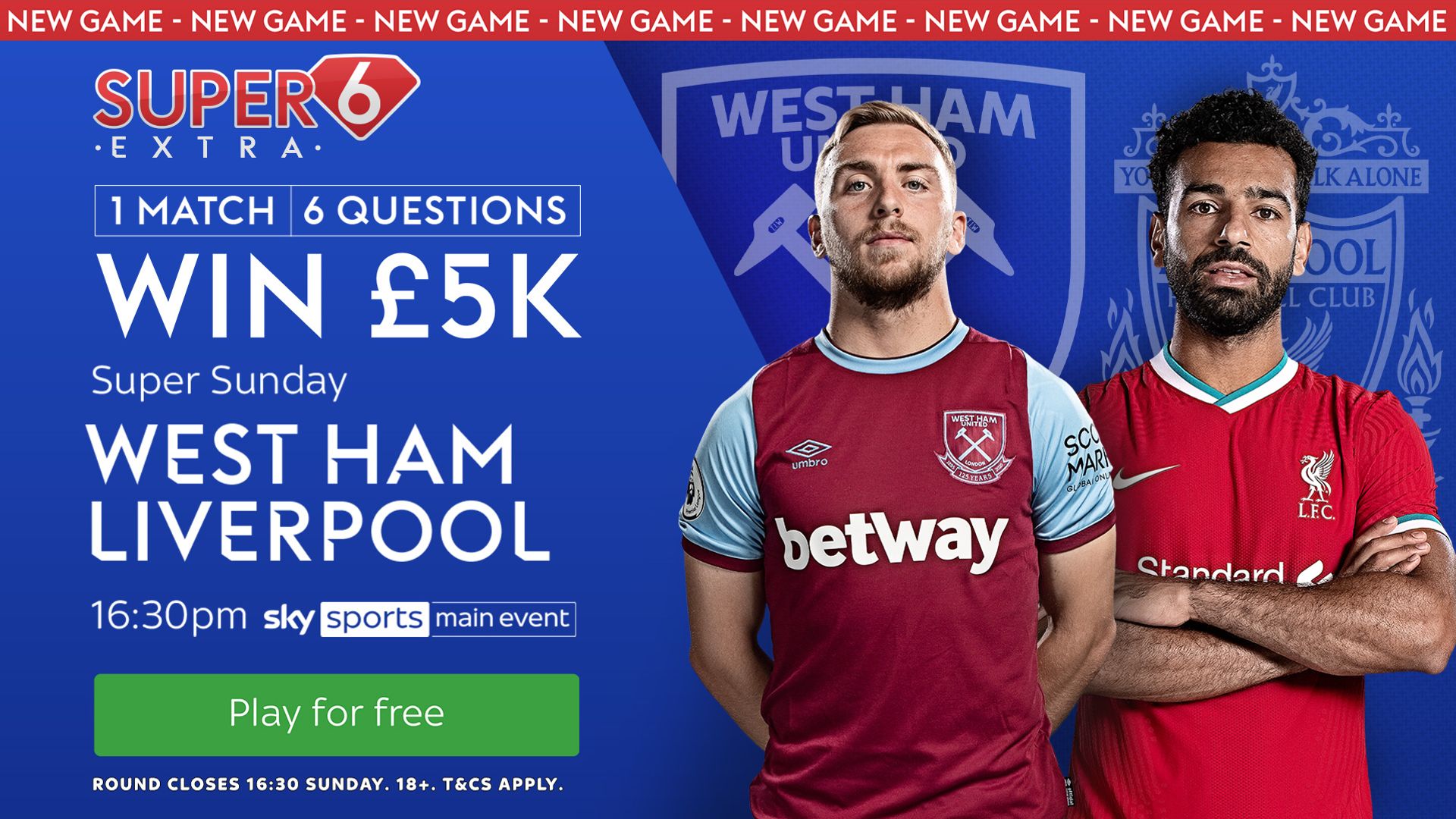 You can win £5,000 for free with Super 6 Extra by predicting what will unfold when West Ham take on Liverpool, live on Sky Sports Super Sunday.

I think we have to start with West Ham. David Moyes is working wonders once again, with West Ham sitting fifth in the Premier League table. This comes off the back of an unbeaten run stretching to six games, while they have won their last six in all competitions.

Liverpool were without a win in their last five Premier League games, failing to score in four successive matches ahead of their sensational performance at Tottenham, which now sets up a spectacular contest between the two on Sunday at the London Stadium.

You can get involved too, by predicting what will happen in the match to win £5,000…for free!

Super 6 Extra is similar to the game we all know and love, but the beauty of our Sunday special lies in having to correctly predict the answers to six questions to scoop the jackpot:

To do that, you need to know the ins and outs of the teams involved, so here, we provide some priceless pointers for your selections.

West Ham had conceded 32 goals after 20 games last season. Fast-forward to this campaign and they have only let in 24 goals, with the Hammers keeping seven clean sheets already this term. Three of these have come within the last five, though they just sneaked over the line in their last outing at Crystal Palace, with Tomas Soucek scoring twice.

Coincidently, the 20-game mark last season was Moyes’ first game in charge of West Ham, as they crushed Bournemouth 4-0 at the London Stadium. Could this be another significant turning point for his side as they look to cement a place in the European positions?

Liverpool are out-of-form as we all know, and it has been a lack of goals that has been the issue. Two things we do not commonly associate with a frontline of Mohamed Salah, Sadio Mane and Roberto Firmino.

That was the polar opposite against Jose Mourinho’s side, with three goals probably doing Liverpool a disservice. Trent-Alexander Arnold, Sadio Mane, Roberto Firmino and Jordan Henderson were the pick of the bunch, with Liverpool starting with intent from the first whistle, and worthy winners over their potential title-rivals.

Liverpool are unbeaten in their last nine matches against West Ham, getting the better of their weekend opponents in seven of those meetings. I do believe this unbeaten run will continue, although it will not be the performance that Jurgen Klopp is after.

Despite Liverpool’s win at Tottenham, both sides are in such a disparity in form, and for that reason I am going to sit on the fence, something I do not enjoy doing. Liverpool will be thankful for a point at West Ham, but the game will be built from two differing formations, and a heap of stifling from the Hammers.

Joel Matip slotted back in at centre-half before coming off with an injury at half-time on Thursday. Nathaniel Phillips was the short-term fix, but it may mean that Jordan Henderson will be in defence once more on Sunday. He can offer Liverpool a differing dimension when playing in midfield, something we should not underestimate, but with West Ham in formidable form, particularly in the midfield area, it will be a significant battle in order to determine the outcome of this contest.

Vladimir Coufal and Aaron Cresswell will have grave jobs on their hands attempting to halt Alexander-Arnold and Andy Robertson, while Cresswell’s set-piece ability could be paramount to the success of the hosts with the aerial threat of Soucek, Michail Antonio, Angelo Ogbonna and Craig Dawson.

Ultimately, Liverpool will grind to a point at the London Stadium. They do have the quality and match-winners to be able to produce, especially when they are needed. Though that has not been the case recently, Liverpool need a response as they have not received the criticism that they perhaps should have done.

The win at the Tottenham Hotspur should kick Liverpool into gear and they will grab a goal, although they will trail on the day. It will simply not be enough in the context of the title race, although European ambitions for West Ham will not be hindered here.

Just under 30 per cent of matches this campaign have been 0-0 at the break, although the second most common has been 1-0 to the hosts. West Ham will start strongly and look to take it to Liverpool, something they will do effectively.

Both teams have scored a similar amount of their goals in both halves this term, but Roberto Firmino’s goal just before the break was Liverpool’s only one in the first half of matches in five games, a trend which will continue here. West Ham’s tighter defence will keep them out and could find themselves a goal up at the interval.

It is hard to look past Michail Antonio. Five goals in 10 starts, two goals and an assist in his last three matches – if West Ham are to score first, he will be right at the heart of it. He did score the first goal earlier on this season against Manchester City.

As I alluded to, West Ham are an ever-increasing threat from set-pieces, so any one of Ogbonna or Soucek could get their head on the end of a pin-point cross. The latter now has seven goals in 2020/21 after his brace at Palace.

Mane was back to his brilliant best against Tottenham, registering four shots on target for his goal, while creating the other two for Liverpool. He is now in double figures for goals this season, and it would not be surprising to see him at the top of that goalscorers list come the end of the campaign.

Salah did have his goal disallowed on Thursday, make of that what you will. Despite the fact he has not scored in his last six Premier League matches, the Egypt forward has netted 13 times this season, and would you dare back against him to break his drought on Sunday?

There are two frontrunners for this not-so sought-after feat, and those players are Coufal and Thiago Alcantara. Coufal has tallied two bookings this season and will come up against Mane who will cause him problems, both in attack and on the counter-attack for Liverpool.

Thiago made a rash challenge on Eric Dier on Thursday to warrant a yellow card and does have that in his locker, though with West Ham potentially looking for the counter when they are sitting deep, Thiago could be the man to break it up.

Soucek is a considerable option, having been brandished two yellows this term, and the midfield looks set to be the pivotal battle on Sunday. Could he be a shrewd pick? Make your selections here.

Corners is a prediction which always throws a spanner in the works. There could be only one or two after the first 30 minutes, before a series in quick succession boosts the total to exactly where you do, or don’t, want it to be.

If Liverpool are to fall behind, or see a lot of the ball which they should for large spells of the game, their corner count could begin to increase quite dramatically. In matches where they have been chasing a goal, Liverpool have taken 12 corners against Burnley and Newcastle, while taking 10 against Southampton.

Choose wisely, as it could be the difference between £5,000 and being empty-handed.

Man of the Match

If the Hammers are to take a point off the champions, there could be a few players behind such a result. The experienced Dawson has been there and done it in games of this magnitude, so his partnership with Ogbonna could be pivotal in preventing Liverpool from racking up back-to-back wins.

Of course, you have the Liverpool options of Salah, Mane, Robertson and so on, but someone who Gareth Southgate will have his eye on will be Declan Rice once again. Going under the radar quite effectively, the England international continues to post consistent displays with the captain’s armband, and I expect him to play his part in a decent result for his side.

Liverpool only saw 50.2 per cent of possession in spite of their dominant display against Tottenham, but you would expect this to increase on their travels to West Ham, who only saw 45.8 per cent of the ball in their 3-2 win at Selhurst Park

There may not be too much of a difference in the amount of possession both sides see in this game, with West Ham most likely planning to sit slightly deeper and hit Liverpool on the counter where possible. What will you predict?

Just one match, and six questions, stands in your way of landing the £5,000 jackpot. Do not miss your free chance to play and enter your predictions before the 4.30pm deadline on Sunday!