The middle-aged heavyweight has filed an injunction against the World Boxing Association (WBA) to block a planned  title consolidation clash between reigning secondary titlist Mahmoud (Manuel) Charr and interim beltholder Trevor Bryan, which is already at risk to not take place as scheduled this weekend.

In a seven-page complaint filed with the U.S. District Court for the Northern District of Illinois, Eastern Division on January 15— a copy of which has been obtained by BoxingScene.com—Chicago’s Oquendo seeks to prevent this weekend’s show from taking place. Additionally sought is what he deems overdue financial compensation in relation to his own sordid history with the sanctioning body. 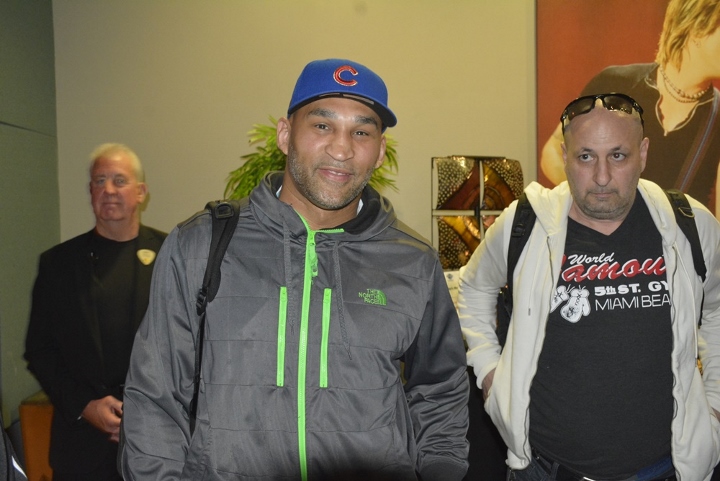 Attorney Raed Shalabi has petitioned on behalf of Oquendo for “an immediate injunction against the pending heavyweight clash between Manuel Charr and Trevor Bryon and requests the court to rule that Oquendo is next in line to fight Charr for the heavyweight title.”

The filing is just one of many bizarre developments surrounding a fight that stands little chance of ever seeing the light of day.

Charr (31-4, 17KOs) remains uncertain of his own status for the event, which is due to air live on Pay-Per-View from Seminole Hard Rock Hotel & Casino in Hollywood, Florida, according to promoter Don King. The venue hadn’t been booked as of Monday, although King’s team insists that such matters have been resolved.

What hasn’t been resolved is the validity of Charr’s ability to fight in the United States, or anywhere outside of Germany where he is based. The Syrian heavyweight reportedly obtained a travel visa in order to make the trek abroad, although still lacks the necessary P1 Visa assigned to athletes in allowing them to compete (gain employment as an independent contractor) in another country.

As previously reported by BoxingScene.com, King has since filed for an exception with the WBA to permit a “World” heavyweight title fight between Bryan (20-0, 14KOs) and former WBC titlist Bermane Stiverne (25-4-1, 21KOs). In the request, King calls for Charr to be named Champion In Recess, if not stripped altogether, allowing the winner of a proposed bout between Bryan and Stiverne to gain recognition as the secondary WBA titleholder to the “Super” crown currently held by unified WBA/IBF/WBO/IBO champ Anthony Joshua (24-1, 22KOs).

The hope of one day forcing a mandatory showdown with England’s Joshua is clearly the targeted prized for all parties involved, hence the mad scramble to lay hands on the version of the title to obtain such a position. It’s a belt which Oquendo has pursued for more than six years, dating back to the controversial circumstances surrounding his July 14 points loss to Ruslan Chagaev.

The bout was referenced in the lawsuit, particularly its aftermath where Oquendo successfully sued Chagaev and his team for full due compensation from the fight and the promise of a rematch. Such a fight never came, with Oquendo passed over on two separate occasions, with Chagaev instead facing Francisco Pianeta and Lucas Browne (whose name is repeatedly misspelled in the filed complaint).

Browne scored a 10th round stoppage in their March 2016 fight to win the belt, only to have to return to sender after testing positive for a banned substance. A rematch between Chagaev and Oquendo was then ordered by the WBA, only for Chagaev to abruptly announce his retirement.

It was all part of a proposed eight-man WBA tournament to consolidate all of its titles, only to go nowhere fast.

Oquendo was then granted the opportunity to face former lineal heavyweight champion Shannon Briggs for a secondary version of the belt in June 2017. By that point, Joshua claimed the “Super” title by virtue of an off-the-canvas 11th round knockout of Wladimir Klitschko earlier that April.

The winner of an Oquendo-Briggs bout would have been next in line to face the wildly popular Brit, who was unbeaten at the time. Sadly, Oquendo was once again left standing alone at the altar after Briggs tested positive for a banned substance thus cancelling their scheduled title fight.

A similar fate met Oquendo’s planned September 2018 showdown with Charr, who claimed the belt by that point in a Nov. 2017 points win over Alexander Ustinov tested positive for Drostanolone and Trenbolone. Charr was issued a suspension and was stripped of the title, only for his reign to be reinstated after exploiting a drug testing loophole in claiming his team was not properly made aware of when his “B” sample would be unsealed and tested.

Parties who test positive have the right to be present for such a process, just as they have the right for the sample itself to be tested in effort to prove innocence through a false positive or contamination.

While Charr’s reign was reinstated, Oquendo claims to have never been paid for the canceled fight or for the lost date with Briggs. Efforts to partially clean up the mess came in the form of the WBA once again ordering Charr to face Oquendo, only for a planned April 2019 fight to never materialize.

Charr has since found himself embroiled in an ongoing feud with King surrounding the circumstances of his due fight versus Bryan. Neither boxer has fought since winning their respective titles—Charr has been out of the ring since the aforementioned win over Ustinov, while Bryan’s career has remained locked down since a 4th round knockout of BJ Flores to win the interim title in Aug. 2018.

Oquendo has not fought since his July 2014 loss to Chagaev. The former three-time title challenger—who turns 48 in April—insists he’s not done with the sport. His career suggests otherwise, which perhaps is realized as evidenced in the end game to secure one last title shot or the cash equivalent.  In the complaint, his legal teams call for the blocking of Charr-Bryan or “in the alternative, for damages in an amount to be proven at trial; [and] any other relief that this court deems fit.”