Mahmoud (Manuel) Charr and Trevor Bryan will have to wait another day to settle their differences—if ever at all.

The oft-postponed WBA heavyweight title consolidation bout has once again hit the scrap heap, event officials have informed BoxingScene.com. Reasons for the fallout depend on which side of the argument is believed, though the lack of a signed contract between parties and the status of Charr’s P1 visa ultimately prompted the decision to drop the fight from the schedule. 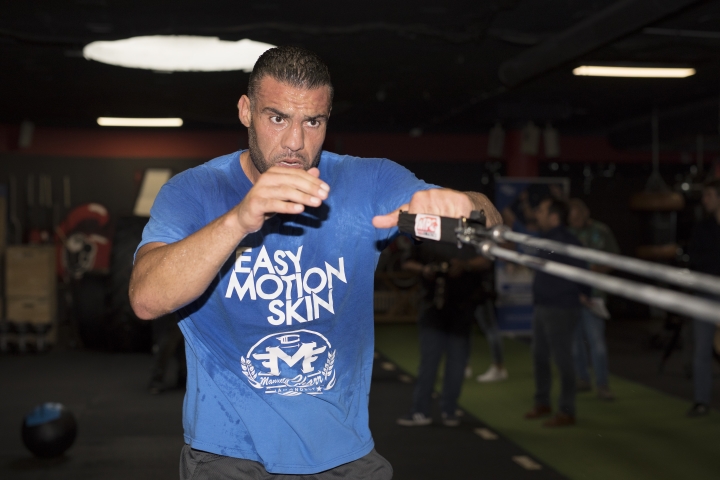 The bout was due to take place this Friday, live on an independent Pay-Per-View distributed by Hall of Fame promoter Don King from Seminole Hard Rock Hotel & Casino in Hollywood, Florida. The show will apparently still go on in some form, just without Charr as part of the card.

“The issue was that Charr did not have the right kind of visa allowing him to fight in the United States,” Carl Lewis, attorney for Don King Productions told BoxingScene.com. “The visa he has obtained allows him to travel to the U.S. but his P1 visa application is still pending. If he was granted a P1 work visa, he could fight. If not, he can’t fight. Don [was] waiting like everyone else for them to make their decision.”

King has previously petitioned for an exception to be granted by the WBA to allow for Charr’s “World” title to be at stake—as would have been the case had he faced Bryan, the sanctioning body’s reigning interim titlist. In the request also came for a call to demote Charr—a Syrian heavyweight based out of Cologne, Germany—to “Champion in Recess” if not outright strip him altogether.

Charr has not fought since a 12-round win over Alexander Ustinov in their vacant secondary title fight in Nov. 2017. The 36-year old heavyweight tested positive for two banned substances surrounding a canceled Sept. 2018 title defense versus Fres Oquendo, who—as reported by BoxingScene.com—filed an injunction to block the Charr vs. Bryan fight or any other secondary WBA title fight in which he is not included.

Charr was suspended and initially stripped of the title as the result of the infraction, though overturned in Jan. 2019 thanks to a drug testing legal loophole in claiming he was not given sufficient notice to be present in order to witness the unsealing of his “B” sample to be tested. From there came the call for Charr and Bryan to meet in a title consolidation clash, with Bryan having won the interim belt in a 4th round knockout of BJ Flores in Aug. 2018.

A purse bid hearing to determine promotional rights was held last March, won by King,who submitted a $2,000,000 bid. Plans to stage the event last May were thwarted by the ongoing coronavirus pandemic, with subsequent efforts met with additional resistance. The WBA intervened, calling for a deadline for the fight to take place by Jan. 29th, 2021 before declaring a purse bid default and determining next steps.

King bore the brunt of the blame, though his team has its own stories to share.

“We’ve been trying for years to make this fight happen,” notes Lewis. “If you look at Charr’s history, he goes through different representation each time and then blames the other side for delays. First it was John Wirt, then Ivaylo [Gotzev]. Now it’s EC Boxing [Erol Ceylan].

“We wanted this fight to happen but of course had to take [precautionary] measures with the pandemic and everything. Charr hasn’t arrived yet, we have rules and regulations for fighters to be in the bubble. We don’t know if he’s been tested (for COVID-19), we don’t know if he’s clean… so we wanted to have everything in place for the show to go on. If Trevor or Charr weren’t available, you’ve got to have a backup.”

The plan—King and his office continue to insist—is for the show to proceed with whatever parts are left in place. The show has already lost its chief support, as a replacement opponent has been sought for inactive secondary cruiserweight titlist Beibut Shumenov, who will no longer defend his belt versus Raphael Murphy.

As for Charr, current health and social distancing protocols minimize his chances of crashing the party, much less serving as the guest of honor.

“Look, Don doesn’t work for Homeland Security,” notes Lewis. “And he’s not trying to bring someone to the U.S. illegally. What they have is the equivalent of a tourist visa. So, he’s more than welcome to come to Florida, see the sights and take in all the attractions he wants. But as far as the fight, that can’t happen without the proper documentation.”