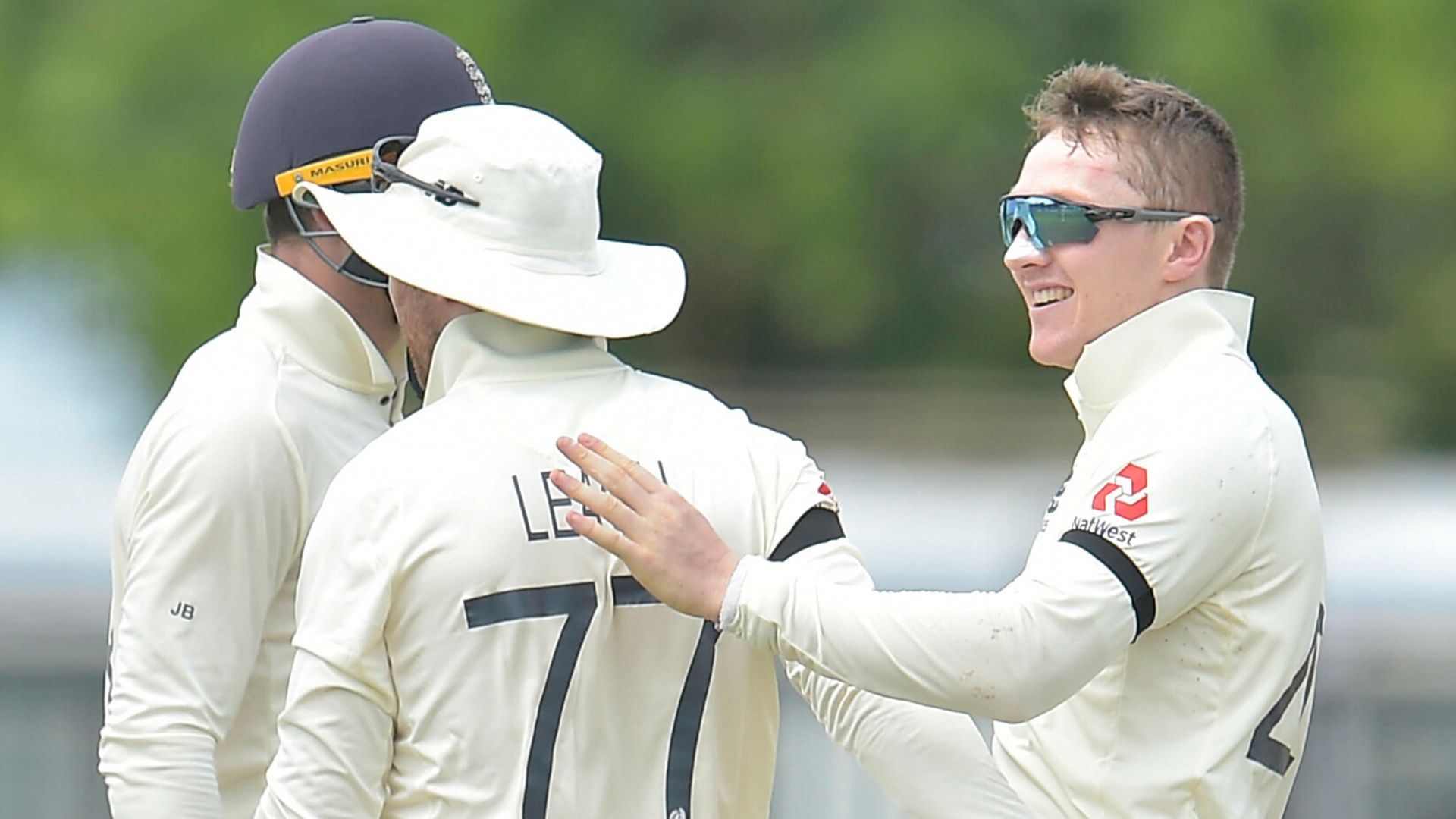 Dom Bess and Jack Leach took a combined 22 wickets in England’s series win over Sri Lanka, Moeen Ali is back in contention too, and Joe Root needs his spinners to rise to the challenge as they take on Virat Kohli’s India in a four-Test series

You might have heard that spin bowling can be quite important in India. No, really.

It’s pretty useful in Sri Lanka as well. So as England leave the island having secured a 2-0 series sweep, you could reasonably assume that their spinners must have impressed.

Certainly, on their last visit in 2018, it was the performance of their three-pronged spin attack that carried them to a 3-0 series whitewash – they took 48 wickets between them and out-bowled their Sri Lankan counterparts on their own turf.

This time around, Dom Bess and Jack Leach took a combined 22 wickets in one fewer Test match, on pitches that, while still providing ample assistance, weren’t quite so favourable to them.

On the face of it, they stack up pretty well and yet as England head to Chennai for the start of a four-Test series, the chief concern, perhaps alongside the opening batsmen, is over the spinners.

That may sound harsh given both Bess and Leach took five-wicket hauls in the first Test and shared eight wickets on day four of the second. A wicket is a wicket after all, it doesn’t matter how they come, you need 20 of them to win a Test match.

But in this instance at least, some wickets are more equal than others.

Bess’ five-for, for instance, came as Sri Lanka imploded on the first day of the series to the extent that Grant Flower, the team’s batting coach, questioned whether he had ever seen such a poor batting display in Test cricket.

“It’s great for Dom Bess that he’s got a five-for but he’s never going to get a cheaper one than that because he really didn’t bowl all that well,” said Sky Sports pundit Michael Atherton.

The off-spinner would admit as much, but equally, he could justifiably argue that there are times when he could bowl superbly and end up wicketless, these things happen.

It was a similar story when Bess and Leach claimed four apiece in the second Test during Sri Lanka’s reprisal their shambolic batting effort of a week or so earlier.

England’s spinners were the beneficiaries, boosting their numbers without ever hitting their best form – and after so long without competitive cricket, particularly in Leach’s case, they were surely even happier than usual to accept such gifts without question.

In years to come, the records will show that Bess, aged just 23 and playing his first Test series in the subcontinent, took 12 wickets at 21.25 and went a just a smidge under three an over.

No one will be talking about the number of drag-downs he bowled, the struggle to consistently land the ball on a challenging length or that Jack Leach’s 10 wickets at 35.50 was perhaps a more accurate reflection of how England’s spinners bowled – it will just be viewed as a good return and rightly so, it is.

In the here and now though, the other stuff matters.

Victory in Australia was a stark reminder of how formidable a side India are – and that counts double at home. Virat Kohli leads a batting unit unmatched, both in terms of quality and strength in depth, all of whom have been brought up playing spin.

Drag-downs will be punished and an inability to build pressure by bowling a consistently good length will mean you’re likely to be out there bowling for long enough that, if you’re lucky, you might just by able to grab a cheap scalp.

You certainly can’t rely on the generosity of the Indian batsman in the way Bess and Leach were able to with the Sri Lankans though.

“We are not sure how much the pitches are going to spin but the quality of the Indian batsmen is going to challenge those two regardless,” said former England coach Andy Flower.

“Having worked quite a lot with them both, what I do know is that they are up for a challenge and they will be looking forward to it and take it on. There is no doubt about that.”

No one would doubt the attitude of either of the former Somerset team-mates, Leach spoke after the first match in Sri Lanka about how tough he had found it to find his rhythm after over a year out of the side, largely due to illness, but had kept wheeling in without complaint as he strove to unearth it.

Having two Tests under their belts going into the India series should definitely help the pair in that regard, they will hope to have shed any rust in the oppressive Galle heat.

That won’t be the case for the third spinner in the squad Moeen Ali, who missed both games after testing positive for coronavirus shortly after the squad landed in Sri Lanka but is in contention to play in Chennai.

Ali has a mixed record in Asia, taking his 10 wickets at 64.90 on England’s last tour of India and faring little better against Pakistan in the UAE early on in his Test career – nine wickets at 48.66 – but in series when the ball was spun from the off, in Sri Lanka in 2018 and Bangladesh two years earlier, the all-rounder has flourished: 18 wickets at 24.50 in the former and 11 wickets at 22.90 in the latter.

On top of that he has enjoyed success against India in England and has form with the bat in India too, scoring two centuries, a fifty and averaging 42.33 in 2016. That series is something of an outlier in terms of his batting in Asia – he averages 25.40 across the four series he’s played – but his potential with the bat is sure to help his case for inclusion at times over the next six weeks.

Ali’s difficulties with the ball last time out in India should serve as a warning for Bess and Leach though, and also brings us back to Flower’s comment on the pitches in India.

Given the wealth of fast top-class fast bowlers at their disposal, preparing surfaces that might offer a bit to the seamers is more of a possibility than in the past, even if it would bring Jimmy Anderson, Stuart Broad and co into the equation for England.

Raging turners would limit India’s own pace attack and bring England’s spinners into the game; Ali and Leach have shown in the past they can excel in such conditions, albeit a couple of years ago now.

What would arguably suit India best is a surface not dissimilar to that which we saw in the second Test at Galle: very flat for the first two days or so before starting to spin big on days four and five.

Leach and Bess went wicketless in that game as England relied on the brilliance of Anderson to keep Sri Lanka to 381, while Ali took 1-190 as India racked up 759-7 declared on that type of pitch last time the sides met in Chennai.

There is plenty to be positive about when it comes to Bess, he has shown he can take wickets but is still learning at the top level and has yet to prove that he can keep things tight and build pressure over a prolonged period, whether the ball is spinning or not.

Ali is a wicket-taker, in fact no one took more wickets in the year proceeding his most recent Test than the off-spinner, but his hiatus from red-ball cricket means it is more than 18 months since that game and holding up an end was never his forte either.

It is Leach perhaps who has provided most evidence of bring able to provide what England will need most from there spinners in India: consistency.

The other two might be more likely to produce an unplayable delivery from nowhere – he is capable of that too, but Leach can also settle in for long spells, hold down an end and help build pressure. Or at least he could. No doubt he will be able to again at some stage but after so long out, how long will it be until he can reasonably be expected to be back to his best?

“They will get better and better, the more cricket they play,” Joe Root told reporters after the first Test. “Not just the art of spin bowling, in terms of the skill and technical elements to it, but the mental aspects of it and getting used to the heat.”

Bess and Leach have now had that match practice while Ali will have to rely on his substantial past experience if he is thrown in, but whichever combination is used throughout the series, consistency is the bare minimum England will need from their spinners if it is to be a successful tour.