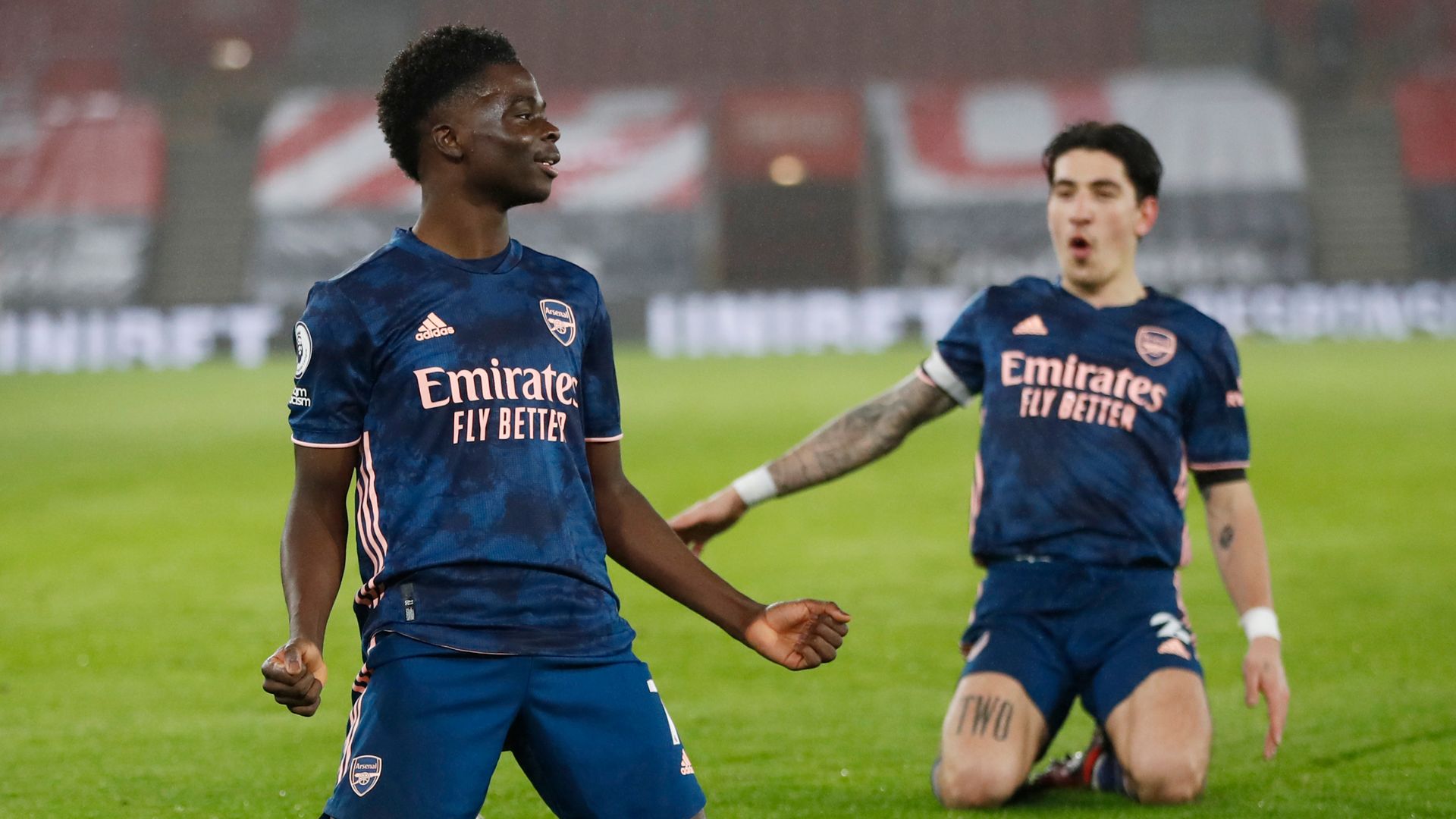 Goals from Nicolas Pepe, Bukayo Saka and Alexandre Lacazette gave the Gunners their fifth win in six league games, meaning they leapfrog Saints and move into the top half for the first time since mid-November.

There was just one goal in it in the FA Cup fourth-round clash on Saturday, but the first half here brought a flurry as Arsenal improved drastically after going behind early on.

Stuart Armstrong’s finish from a clever James Ward-Prowse corner put Saints ahead (4), but Pepe answered some critics with a low finish inside the box from Granit Xhaka’s through ball (8).

Saka got Arsenal’s second just before the break, rounding Alex McCarthy after Lacazette’s threaded ball (39), and Saka turned provider for Lacazette in the second half for a well-constructed third (72).

After looking over their shoulders at the relegation zone in December, Arsenal are now only five points off the top four, while Saints are a point behind in 11th.

How Arsenal fought back to sink Saints

Barely a month after Arsenal were dubbed a crisis club, losing five out of seven in the league, Mikel Arteta’s side have fought themselves into European contention by taking 16 points out of a possible 22.

This victory felt the most defining of late, showing a fighting spirit, and performances from the likes of Pepe, Xhaka and Lacazette in particular, that had been missing earlier in the campaign.

In a frantic first half, Arsenal should have been ahead within a minute as Xhaka played Lacazette through on goal, but the Frenchman was denied by McCarthy, who rushed out to deny him one-on-one.

Just under three minutes later, Southampton opened the scoring; Ward-Prowse’s corner to the edge of the box met the on-running Armstrong, and his first-time effort flew past Bernd Leno. Straight off the training ground, but Arsenal’s marking left a lot to be desired.

But the Gunners did level four minutes later through Pepe, who many thought did well to keep his place in the XI after Saturday’s performance. Threaded through by Xhaka, Pepe then slotted under McCarthy from the left of the box with his left foot.

Arsenal began to find rhythm – Cedric Soares volleyed inches wide after good work from Saka – and it was the brilliant Saka who put the visitors ahead before the break. Capitalising on Southampton’s high line, Lacazette played Saka through, and as McCarthy darted off his line, the youngster showed quick feet to round him and turn into the empty net from just inside the box.

Saints’ press worked wonders on Saturday, and though they attempted similar on Tuesday night, Arsenal’s own press was succeeding. After Xhaka had won the ball high, Cedric’s ball found Emile Smith Rowe in the box, but after nipping the ball over McCarthy, the effort was weak enough for Jack Stephens to clear up inside the six-yard box.

Saints made just the two forced changes from the 1-0 win over Arsenal at the weekend, with Valery and Vokins coming in at full-back to replace Walker-Peters and Bertrand.

Arsenal, though, made five changes from Saturday – Nketiah, Martinelli, Pepe, Elneny and Gabriel came out, replaced by Luiz, Smith Rowe, Partey, Saka and Lacazette. Kieran Tierney didn’t make the squad, so Cedric kept his place at left back.

Smith Rowe was then subbed off with what looked like a muscle injury, but Arsenal made sure of the points with a well-worked third. Cedric, who was superb against his former club, found Saka with a fine crossfield ball, and Saka’s first-time ball across the face of goal was met by Lacazette under the crossbar to simply tap home.

That goal took the fizz out of Southampton – who have scored just three goals in seven games – as Arsenal held on for an impressive victory, as Arteta’s side begin to level out after a disastrous start to the campaign.

Southampton now host Aston Villa on Saturday Night Football at 8pm, live on Sky Sports Premier League, before going to Man Utd on Tuesday in the Premier League at 8.15pm.

Arsenal host Manchester United on Saturday Night Football at 5.30pm, live on Sky Sports Premier League, before going to Wolves on Tuesday in the Premier League at 6pm.