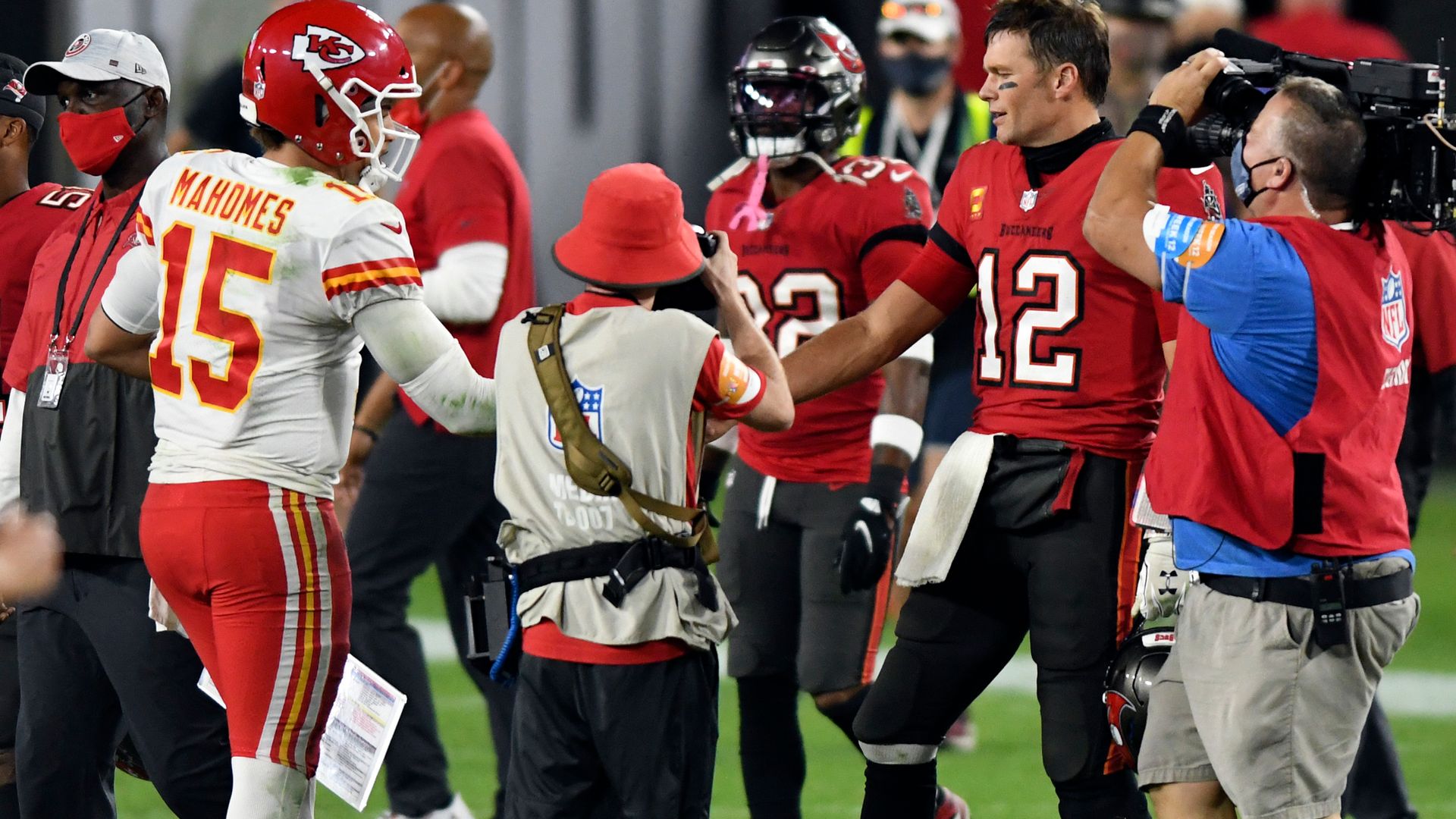 When the Bucs and Chiefs face off, it will feature the last two quarterbacks to win a Super Bowl – coverage of Super Bowl LV is live on Sky Sports NFL, with build-up underway from 10pm ahead of an 11.30pm kick-off on February 7

So now we know. Super Bowl LV will feature the Tampa Bay Buccaneers and the Kansas City Chiefs, and a quarterback duel for the ages – literally – as Tom Brady and Patrick Mahomes lead their teams’ pursuit of glory.

Following a Conference Championship weekend that offered up all manner of storylines for any of the four teams that made it through to the final showdown, the NFL has delivered a match-up with mouthwatering head-to-head and no little narrative.

The teams met in Week 12, also at Raymond James Stadium when Kansas City edged out Tampa Bay 28-24 to improve to 10-1 for the season – at 7-5 the Bucs were in last chance saloon and they have won all seven games since.

Starting at home. After 55 Super Bowls across 25 venues, no team has ever played a Super Bowl in their own stadium, until 2021. Tampa’s Raymond James Stadium will play host on February 7, and the Buccaneers will be in their own backyard for it.

With that in mind, it’s probably fitting that Brady is the man that’s leading the franchise there – and in his first season with the Bucs.

Secondly, the quarterback match-up. Mahomes and Brady are at opposite ends of the spectrum. As NFL.com‘s Judy Battista put it, ‘the maker of an old dynasty against the creator of a new one’.

They will meet for a fifth time. 25-year-old Mahomes, the transcendent talent for the 2020s, making plays with his legs, throwing it a mile – sometimes without even looking – and Brady.

Brady is doing things that 43-year-olds should not be doing. He has taken the Bucs on a history-making, three-game winning streak to become the first fifth seeds into the Super Bowl since the New York Giants in 2011.

For fans of symmetry, those Giants knocked off Brady’s Patriots in Indianapolis. The GOAT has come full circle.

And thirdly, the coaching match-up. Andy Reid is back in the Super Bowl and his Hall of Fame stock has all manner of vindication. In the opposite corner is Bruce Arians, who will be going to his first.

For Arians this year, read Reid last year. A richly-deserved award for a man who has spent his career known as the quarterback whisperer. Brady may not need sweet nothings whispered to him when faced with a two-minute drill but the pair always had the look of a formidable pairing.

At a time when diversity is being championed, and questioned in head coaching positions, Arians stands as a shining light. All four co-ordinator positions are filled by black coaches, while the Bucs are the only team in the league with two full-time female members of the coaching staff.

Finally, the match-up itself. The Chiefs are looking to go back-to-back. No team since the Patriots – yes, Brady again – in 2003-04 have gone back-to-back. Last year was the Chiefs’ first Super Bowl success; the Bucs are chasing their second.

Brady is a man who will have played in 18% of the Super Bowls to have been played. February 7 will be his tenth – and he has won six of them.

So GOAT vs Baby GOAT, the man with six Super Bowl rings against the man with one, and the man most likely to emulate those ridiculous number. But what else do we know about the two teams who are chasing the Vince Lombardi Trophy?

Road to the Super Bowl – Buccaneers

One first for Brady was the fact that he started the Playoffs in the Wild Card Round for the first time in his storied career. It meant that the Bucs were likely to have to win three games on the road – and so they did.

They’ll be back in Florida after wins over Washington, New Orleans, and Green Bay – the latter two involving two of his closest rivals. Can we call them rivals? Drew Brees and Aaron Rodgers couldn’t stop Brady, the Bucs, and their all-star cast.

Head coach: 68-year-old Bruce Arians, is heading to his first-ever Super Bowl as the Bucs set their sights on a second title, with the prospect of winning it in their own stadium, in their city, and their state.

He’s possibly the original ‘quarterback whisperer’, renowned for the players he has coached and improved at that position, although this season has seen him plough uncharted territory, teaming up with a 43-year-old, six-time Super Bowl winner at QB.

Key man: The wide receiver corps is formidable, the defense is difference-making, but there really can be no looking past Tom Brady. His move to Tampa Bay was the most fascinating story of the offseason, and the media attention and hype hasn’t exactly died down since – even if his play has not always been peak Brady during the season.

Regular Season: Part of the criticism of Brady and the Bucs has come as a result of only one of their 11 wins coming against a team that posted a winning record – the impressive 38-10 beating of the Green Bay Packers in Week Six. Tampa have otherwise struggled against the top dogs, losing to the Kansas City Chiefs, being handily beaten twice by the New Orleans Saints, and also slipping up against the Chicago Bears and Los Angeles Rams.

That said, this team looks to have really got their act together down the stretch, following up their late Week 13 bye with four wins in a row – the last two of which saw them put up 40 plus points.

Road to the Super Bowl – Chiefs

It hasn’t all been plain sailing for the Chiefs, whose swashbuckling style of last season did not really fire all year despite their record. When the Browns pushed them close in the divisional round, the question marks continued – not least when Mahomes suffered a concussion in the closing stages.

However, they turned it on when it mattered most. They blew away the Bills in the AFC title game with the sort of display that has become their hallmark – big play after big play until Buffalo could take no more.

Mahomes gets the plaudits, but led by Travis Kelce and Tyreek Hill, the threats around him offer the perfect platform to Reid to dream up all sorts of offensive genius.

Head coach: Andy Reid is in season eight with the Kansas City Chiefs, and doesn’t appear to be slowing down after signing a contract extension during the team’s bye week this season. This year’s 14-2 record marks Reid’s best as a head coach and the best in Chiefs history.

He was the first coach to lead two teams to three consecutive Conference Championship matches. He will look to become the first head coach since Bill Belichick to win consecutive Lombardi trophies.

Key man: The uber-talented Patrick Mahomes, of course. The reigning Super Bowl MVP finished the year second in passing yards with 4,740 for a third-most 38 touchdowns and just six interceptions, having been rested in the season finale against the Los Angeles Chargers.

There’s an aura of invincibility to his game at times, even when, like on a few occasions this season, he has dropped a level below his ridiculous best. How could you bet against the Chiefs when Mahomes is under center?

Regular season: The Chiefs opened the season with a four-game win streak that included a statement victory over Lamar Jackson and the Baltimore Ravens in Week Three, before falling to defeat against a Las Vegas Raiders team that would push them as close as anybody in a 35-31 loss later in Week 11.

The Super Bowl champions entered their Week 17 match-up against the Chargers riding a 10-game unbeaten run, having flexed their strength with wins over the Buffalo Bills, Tampa Bay Buccaneers, and New Orleans Saints behind a No 1 ranked offense.

Super Bowl history: Kansas City lifted the Lombardi Trophy on their first visit to the Super Bowl in 50 years when they beat the San Francisco 49ers in Miami last February.

They’ve won two of their three visits to the Super Bowl, having been crowned champions in 1969 when they beat Minnesota three years after losing to the Packers in Super Bowl I.

Watch Super Bowl LV with 90 minutes of build-up on Sky Sports NFL from 10pm on Sunday February 7; kick-off is at 11.30pm. Sky Sports NFL will have all the build-up to the season showpiece with additional programming from Inside the Huddle, feature content across our website – so follow us @SkySportsNFL to stay up to date