Eddie Hearn says that it is vital that boxing continues during the latest UK lockdown or it could “fizzle out”.

A huge rise in cases of Covid-19 cases has seen another lockdown with schools closed as well as non-essential shops. But elite sport has been given the green light and while the British Boxing Board of Control paused the sport during January it shows will resume on February 13 when Josh Warrington defends his IBF featherweight title against Mauricio Lara. 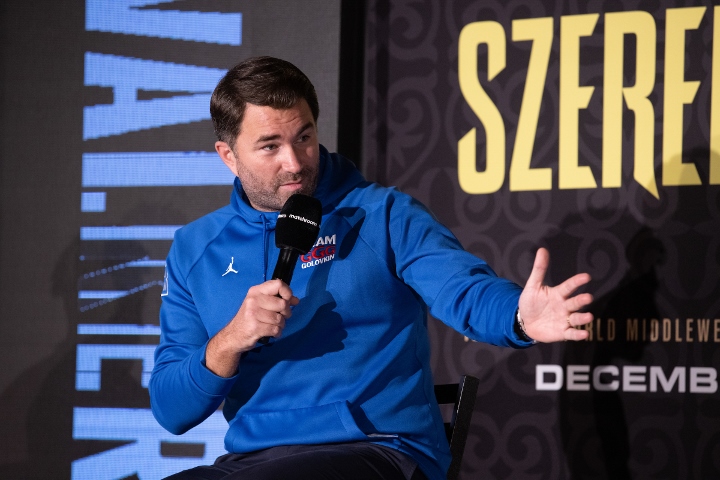 Hearn is certain that boxing will continue unless the Government changes its views about elite sport but says it is important that boxing is not left while other sport continues.

“If all the other elite sports are allowed to return and boxing wasn’t allowed to then it can fizzle out very quickly,” Hearn said.

“The Board are definitely set on it but what we have learnt over the last year is anything can happen at any time. You would hope the infection rate is coming down but we still have another four weeks before the first show.

“I feel we have a really good system in place but there is a difference in medical care in our sport versus others.

“Anything is possible but right now I feel everyone is committed to the return of boxing in February. And I don’t think we have any choice, if the sport is going to survive.”

Hearns says he was keen to start the tear fast, with five shows in a nine weeks to keep the spotlight on the sport.
“We have never really come out in January and released five straight shows but I feel we need to keep the story going,” he said.

“Hopefully it leads to AJ v Fury getting announced in two, three, four weeks and people can say ‘boxing is flying’.

“The business of boxing is very difficult because we are running shows without gates and the revenue has decreased. Some fighters have flourished, and others have been unwilling to move on numbers and have stood still.

“I think everyone has had a go, us, Bob Arum, [Frank] Warren. No one has sat back and said ‘we just can’t do it’. People have taken their losses on the chin and come up with new ways to make compelling content.”

However, Hearn says it remains very difficult to plan ahead.

“AJ vs Pulev was fantastic, even with just 1.000 people there,” he said. “I felt like we were on the right track there but we have gone ten steps backwards but we have no choice.

“The vaccine is the only way out and we won’t return to normality until that process is deep underway or finished. I guess that won’t happen until the summer at the earliest.”