Fred Levin, the Pensacola attorney who with his brother Stanley guided Roy Jones through the glory years of Jones’s ring career, died on January 12, 2021, of complications from COVID-19. He was 83 years old.

Levin, like Jones, was born and raised in Pensacola. After graduating from the University of Florida School of Law in 1961, he began a legal career that saw him become one of the most successful personal injury trial lawyers in the country. His blunt talk and aggressive style of litigating ruffled some feathers. But during his career, he was on the receiving end of thirty jury verdicts in excess of $1,000,000 and six in excess of $10,000,000.

Levin’s most significant courtroom triumph came after he successfully lobbied Florida governor Reuben Askew (a close friend and former law partner) and the Florida state legislature to revise the state’s Medicaid Third-Party Recovery Act. The revision allowed the state to sue the tobacco industry to recoup money expended for the cost of treating smoking-related illnesses. The litigation that followed was Dickensian in length as the tobacco industry used every legal tactic at its command.

Many of Levin’s law partners had opposed the idea of the firm serving as plaintiffs’ counsel in the case because of the huge outlay in manpower and out-of-pocket expenses that would be required to properly litigate the matter. To allay these concerns, Levin agreed to significantly diminish his financial draw for the duration of the litigation. But if the plaintiffs prevailed, he would receive the lion’s share of any attorneys fees that were awarded. Ultimately, the tobacco industry settled the case for $13 billion. The court-approved legal fee was $300 million.

At that point, Levin became a philanthropist. He made tens of millions of dollars in charitable contributions to educational and medical causes. The most notable of these came in 1998 when he donated $10 million to the University of Florida School of Law, the second largest cash donation ever received by a public law school as of that time. One year later, the name of the school was officially changed to the University of Florida Fredric G. Levin College of Law.

Levin’s entry into boxing came about largely by chance. In the mid-1980s, his brother Stanley (also a partner in the firm) was on the Board of Directors of the Pensacola Boys Club where Roy Jones Sr was teaching youngsters to box. Roy Jr was in the program. Then the Boys Club decided to eliminate its boxing program for financial reasons.

“It was only a matter of a couple of hundred dollars,” Stanley later reminisced. “So I took the money out of my pocket and gave it to them. That’s how I met Roy.”

Roy Jr was thirteen years old at the time. Later, during a period when he and his father were estranged, Roy lived in Stanley’s house for a year. When he turned pro after the 1988 Seoul Olympics, the Levins agreed to manage him. 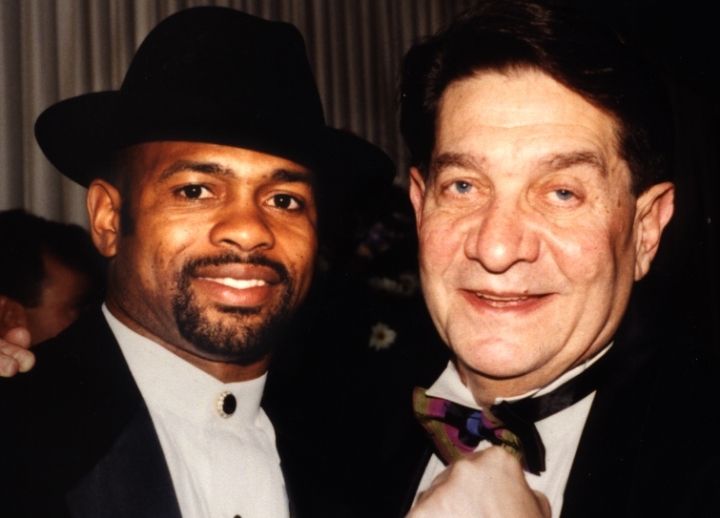 Stanley’s primary expertise was in tax law. Like Fred, he had no background in the business of boxing. Initially, there was widespread criticism of the brothers in boxing circles. Hall of Fame boxing writer Michael Katz labeled them “Tweedledumb and Tweedledumber.”

But the Levins were undeterred. They formed a corporation called Square Ring to manage Jones’s affairs and keep him free of longterm contractual entanglements with the sports more unsavory promoters. They also negotiated what was then the most lucrative non-heavyweight contract in the history of boxing for Jones with HBO.

“Stanley and Fred were quick to learn and understand the arcane business of boxing,” former Time Warner Sports president Seth Abraham (the architect of HBO’s boxing program) recalls. “I was always impressed by their openness and candor to acknowledge what they did not know or understand. No boxing question embarrassed them. Once learned, they did not forget the lesson. They represented Roy professionally and with great commitment. They were honest, straightforward, and prepared. Not a motto you find for most boxing buccaneers.”

In 1995, the Levins were jointly honored by the Boxing Writers Association of America as “Managers of the Year.” Sadly, there came a time when Jones chose to disregard their advice and no longer sought their counsel.

Fred was also a forceful advocate for tolerance and understanding among people of difference races, religions, and ethnic backgrounds. I saw that firsthand in 1997 after Muhammad Ali and I co-authored a short book entitled “HEALING” that spoke to the need for those qualities.

Muhammad, his wife Lonnie, and I had visited schools throughout the country with the help of HBO, the Boston Globe Foundation, and Turner Broadcasting. At each stop, we addressed students about the need for tolerance and understanding and gave the students copies of “HEALING”. Then I got a telephone call from Fred.

“I like what you and Muhammad are trying to do,” Fred told me. “I’d love to put together an event for you in Pensacola.”

Fred’s idea of putting together an event wasn’t opening up a high school auditorium. He rented the entire Pensacola Civic Center at his own expense and arranged for buses to transport 7,600 students to the assembly from high schools throughout Escambia county.

There was opposition in some quarters. Several Christian fundamentalists threatened legal action to halt the assembly, claiming that our appearance was a plot between a Muslim and a Jew to teach heresy to their children. To deal with this objection, the school board decided that a parental consent form would be required for students to attend the assembly. Then, inexorably, the community came together in support of our visit. Florida Governor Lawton Chiles attended the event and praised its purpose. I later learned that the son of one vocal opponent of the “HEALING” assembly forged a parental signature on his consent form so he could attend.

The last years of Fred’s life were difficult (as they are for many people). His wife Marilyn, who he’d met when they were undergraduates at the University of Florida, died of cancer in 2011 after 51 years of marriage. In 2016, Fred was operated on for stage 4 lung cancer that had metastasized to his brain. COVID-19 brought an end to his life. But his legacy lives on.

How generous was Fred? His brother Stanley told me a story once that answers that question.

Stanley (who died in 2009) was having health issues that made it increasingly difficult for him to work. Each day was a struggle. One day, Fred asked him, “How much money would you need in the bank to feel that you and your family were financially comfortable for the rest of your life?”

Stanley said he’d think about it. He went home and evaluated his financial situation. Several days later, he gave Fred a number in the high seven figures. Fred took out his checkbook and, with the stroke of a pen, made his brother financially secure for life.

In 2019, speaking of his philanthrophy, Fred Levin said, “If you’ve been fortunate enough to take care of your family and you’ve got money over and above that, give it now while you’re living. Don’t hold it. Instead of waiting to die, give it to different charities. Give it while you’re living, name it in honor of loved ones, and get the enjoyment of the gift.”

He made a difference.

Thomas Hauser’s email address is thomashauserwriter@gmail.com. His most recent book – Staredown: Another Year Inside Boxing – was published by the University of Arkansas Press. In 2004, the Boxing Writers Association of America honored Hauser with the Nat Fleischer Award for career excellence in boxing journalism. In 2019, he was selected for induction into the International Boxing Hall of Fame.