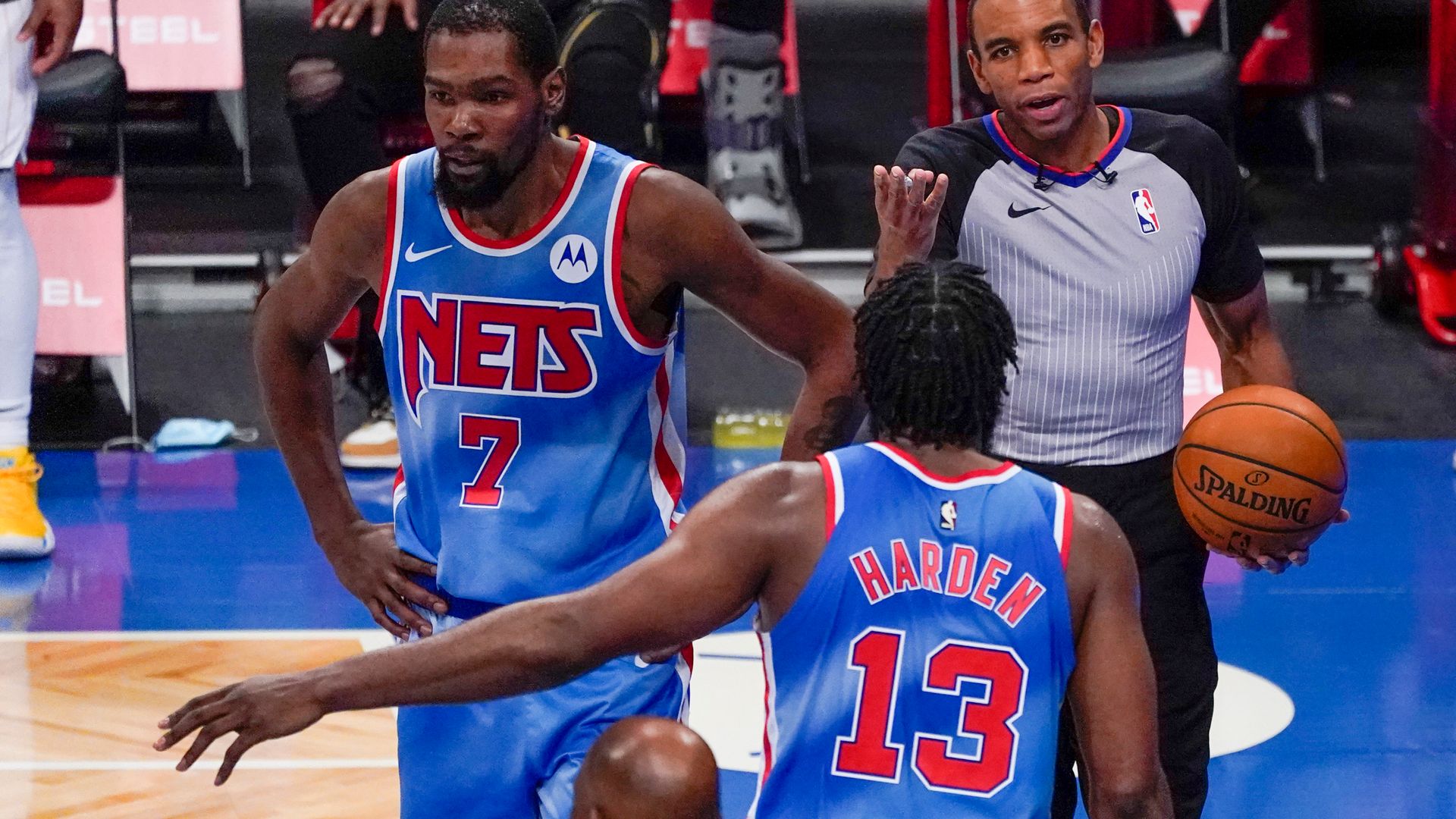 The blockbuster trade that saw James Harden join his old Oklahoma City Thunder team-mate Kevin Durant and Kyrie Irving on the Brooklyn Nets last week threw up so many questions.

How would the big three work together on the court? Who will be the leader of the team? Will there be any objections to sacrificing shots?

Can head coach Steve Nash manage the egos of three players who are used to having the ball in their hands? Will anyone play defense? Is there enough depth to sustain a championship run?

They all feed into the biggest question of all: will it work?

The recent history of ‘superteam’ construction has had mixed success, especially in the first year of a new group being together. Boston’s big three in 2007 set the bar by bringing in Kevin Garnett and Ray Allen to join Paul Pierce and a championship followed in their first season together.

When the Miami Heat attempted to recreate that magic of a great shooting guard with a top small forward and a league-leading power forward, Dwyane Wade, LeBron James and Chris Bosh put together a performance that would see them reach the 2011 NBA Finals in their first year together, but it was clear there was some chemistry to develop and they would not win it all until the following season.

You had the LA Lakers big five of Steve Nash, Kobe Bryant, Metta World Peace, Pau Gasol and Dwight Howard. But that failed to get out of the starting blocks and finished with a 44-38 record, thanks to injuries, multiple coaching switches and chemistry issues all year.

The Golden State Warriors did not really have a ‘superteam’ for the first two years of their incredible run, which started with a championship in 2014-15 and finished with the league’s best-ever regular season record of 73-9 in 2015-16.

However, they lost in the Finals that year and recruited Durant, going on to win two championships and make it to a third Finals (the franchise’s fifth consecutive) even with almost all of their All-Stars injured at some stage in the playoffs that year.

So, there are no guarantees Brooklyn’s big three will work, but on paper, it looks pretty good.

Each member of the big three play different positions on various spots of the court: Irving enjoys dribbling to the mid-range, Harden traditionally opts for a three or something under the basket, and Durant is the most versatile with an unmatched post game to boot.

Irving primarily plays point guard and is deadly as a creative ball handler, but, according to Cleaning The Glass, he has some versatility and played more than 20 per cent of his time as shooting guard during the Cleveland Cavaliers championship season in 2015-16. Despite this, that year was one of his worst seasons shooting the ball – he simply plays better with the ball in his hands.

While Durant is considered the more malleable player of the three – he will set screens, work from the perimeter, play in the post, defend bigs or wings – and despite having a career average of 27 points per game, he seems to score with ease and within the flow of an offensive set.

That being said, his usage has always floated around the 30 mark. In fact, career usage for all three floats around that region.

The lowest has been Irving, whose usage registers at 29.2, but he spent three years playing with LeBron James, who takes up a lot of oxygen on a team himself. The last time Harden played with two other players with such high usage, he was the one to take the back seat in Oklahoma, as Sky Sports’ Mo Mooncey recently discovered.

Imo Harden won’t be happy with that happening again, he’ll take the RW usage and Kyrie will be forced to sacrifice his touches on the ball. https://t.co/XuQGtXTr7t

Harden spent his first three seasons as a true shooting guard – cutting off ball, shooting from around the court – and more than half of his shots were assisted. But between 2016 and 2020, the percentage of assisted field goals did not reach 20 per cent in any season.

Basically, he was dribbling and creating his own shot more than 80 per cent of the time, the Rockets system was designed around him to do this but he wore down in the playoffs.

Avoiding that exhaustion will be easier with two other stars to lean on, especially Durant, who has proven he can rise at the most pressured moments of a Finals series.

Harden showed he will have few issues working with Durant in their win on Saturday against the Orlando Magic.

When Harden was on the court, the team did not run too many set offenses, as they would have had few opportunities to go through the playbook in detail before the game. But the benefit of having two of the best players in the world on one team is that you can just roll the ball out and let them play.

The game was close at the end and when the Magic pulled within two points, it was Durant who scored on three straight possessions to maintain the separation.

Harden got to the line eight times in the final frame, which helped the Nets extend the lead. He had a great game, pushing the ball forward for easy assists, and worked all over the floor – even scoring in the mid-range, which was something he avoided at all costs in Houston.

Harden’s game worked well getting up and down the court more quickly than he is used to. The Nets played 102 possessions against Orlando, unlike the seasons when his Rockets team were at their best – in 2017-18 they averaged 97.6 possessions.

But the Magic game did not go perfectly. In the first quarter, Harden passed to Durant and then stood still for a second, but Durant dribbled towards Harden, who realised he needed to move to the wing.

Not something he would have done on the Rockets – more typically, you saw him hover above the break waiting, not getting involved with the play and just waiting to bail out and offense. On this play, however, Harden moved off the ball and received a pass on the deep wing and turned the ball over.

This is possibly just a case of working out kinks, but it showed Harden might be willing to switch up his game.

There was something else he showed in his first game with the Nets than he did during the eight games he played for the Rockets this season: passion.

There were moments where he barked at Durant for mistakes he made, demanding the best out of his team-mate.

Harden worked on both ends of the floor: with around 10 minutes left in the fourth quarter, Aaron Gordon and Terrence Ross put Durant and Harden in a pick and roll. Durant hedged hard to isolate Ross, who was driving towards the basket and he passed to Gordon, who was open in the corner.

Harden rotated and hustled to close out the shooter harder than he had done on the Rockets in perhaps two seasons.

It is just one game, but his opening performance with the Nets, Harden showed he can make this work.

The imminent return of Irving after the point guard was fined for a previously uncommunicated absence and breaking the NBA’s coronavirus protocol will change the dynamic of the team but they should still have little problem scoring.

They are the third highest scoring team in the league so far, and a third weapon will only improve that but when they don’t score 120 points, they have lost five games and won once.

Unfortunately for Irving, his first test as part of a big three will likely be against a top-two offensive and a top-eight defensive team when the Milwaukee Bucks will throw more questions at the Brooklyn Nets when they face off as Sky Sports’ centrepiece on MLK Day.