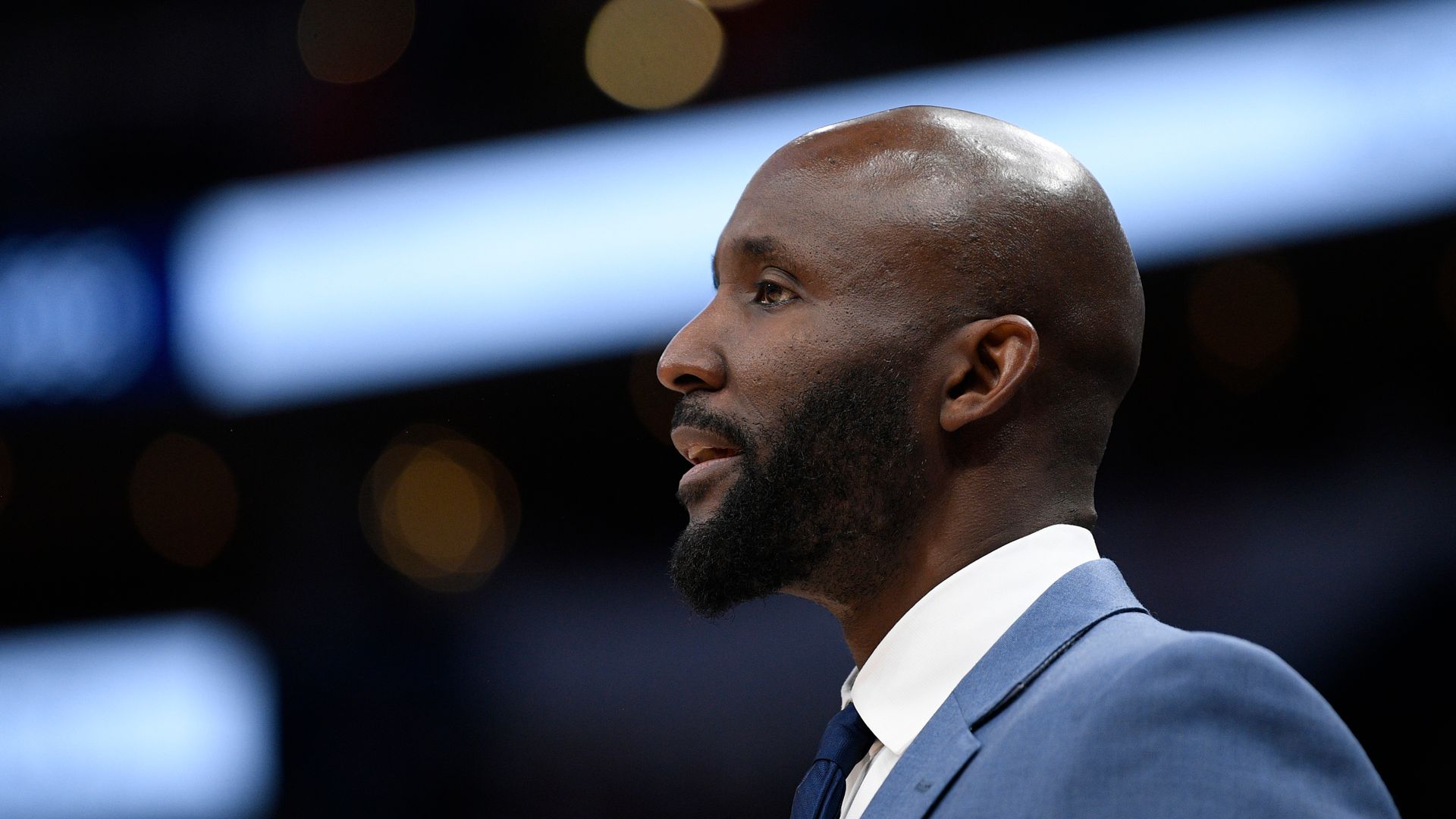 Being a prominent black man in Atlanta and deciding to use your voice against racism and to promote unity is also choosing to walk in size 20 footsteps. Given the city’s steep historical significance in civil rights and the iconic figures who led that fight many decades ago, it’s not for the faint of souls.

But Lloyd Pierce not only accepted that challenge within the last turbulent year, he quickly became an impactful and commanding presence in the community, and within the NBA as well.

The voice of the Atlanta Hawks coach became a force for change, rallying against police brutality and systemic racism, and he took part in numerous marches – with mask on, of course.

At the ‘March On Georgia’ last summer following the deaths of George Floyd and Breonna Taylor, Pierce was one of the keynote speakers, and received loud applause when he ended by saying: “I was born a black man. I am going to die a black man. But I do not want to die because I am a black man.”

Even before those incidents, Pierce partnered with and made a contribution to the Georgia Innocence Project, an independent non-profit organisation that works to correct and prevent wrongful convictions in Georgia.

As the NBA prepares for Martin Luther King Jr. Day, Pierce recently took time to reflect on the last year, in which he learned plenty about himself and Atlanta, and the depth of desire within the NBA players and coaches to bring about positive change within communities of colour.

Within this excerpt of an interview, the 44-year-old Hawks coach spoke eloquently once again with Shaun Powell for NBA.com on subjects that have become a passion for him.

In Atlanta, you’ve quickly become known as more than just a coach. How and when did you get your voice, and why did you decide to use it?

I don’t know if there was a moment. I’ve been influenced by a lot of people and the work they’ve done. When you become a head coach you get a different level of access and people are asking you to speak.

It’s not a moment where you show up and you’re working with the Georgia Innocence Project. There are things that lead up to that. I’ve been influenced by friends who specifically expressed and used their voice in different ways.

By the time I become a head coach in the city of Atlanta and get to meet John Lewis, the Reverend CT Vivian, ambassador (Andrew) Young and Hank Aaron, I think instantly you realise you’re in a different place in life.

I imagine being a black man in a leadership role and with a platform in Atlanta comes with a sense of responsibility. Do you agree?

Without a doubt. When you’re in Atlanta and you meet those people, it’s different. I grew up studying Dr. King and the Civil Rights moment and hearing about these people, and to actually meet them, to actually know where Auburn Avenue is and the MLK Center and Edgewood … these are the areas you read about.

To be in that city, to know these people, to know what they fought for, to know that that fight is still occurring, you feel the sense of responsibility to stand on their shoulders and continue that work.

You don’t anticipate this in 2020, but it’s a moment of truth to those in leadership positions to try to figure out what your sense of purpose is in life. To me in 2020, it was a sense of purpose and a commitment to stand on the shoulders of those greats.

After putting in so much work on the front line in Atlanta trying to get people to register to vote, where were you election night, and what was that like for you?

I was in L.A. It was a mess for me. You understand the impact of what we tried to do in Atlanta and the Hawks in opening up the arena. You had this emotional and powerful feeling for what you’re doing. The organisers were the true heroes, but we were able to do our part as well. Now election night comes and we’re kind of out of it.

I couldn’t remove myself from the TV, thinking that something was going to reveal itself. It was nerve wrecking, it really was. You know it’s going to be a long process. We heard (the final result would take) days, potentially weeks.

I’m sitting there on election night thinking I’m going to get an answer that night, knowing good and well that it’s not happening. But that’s when the drama and divide was truly revealed, from election night moving forward. And we’ve still been dealing with it.

Because of the turbulent events of the past year, are NBA players finally getting around to being politically savvy?

I think as a black man I’m frustrated and saddened by what I see for people of color, saddened for what I see when you think of politics and power and how it impacts our country. But I also realize I have a voice, and our players realize they have a voice.

So with their voice they want to work with people who want to do right and create change for people like us, people like me, people in impoverished communities who don’t have health care access and don’t have political access.

So I don’t know if anyone is politically savvy in the NBA, but I do know that we are extremely passionate, and I am committed to helping the people of Atlanta and helping people who look like me understand that there’s representation at many levels and how do we help them get there. That’s what’s driving me and I think that’s what’s driving our players as well.

How important is it to hear the voices of white people and see them active as partners in the struggle for equal rights?

So it’s important because it’s one of the things we saw in the marches and protests (last year). We saw white people joining people of colour against police brutality, against racism, against systemic racism, and it just shows that when unified, the power of the voice grows expeditiously but it’s not going to do so if it’s just black people marching, or Hispanic marching because then it’s just Black Lives Matter and it’s just a Hispanic issue.

It affects everyone and we need white voices to march and speak up and demonstrate that it’s a major issue. It’s been good to see. I’ve had more meaningful conversations with my white friends than I’ve ever had.

You and Doc Rivers helped mobilise NBA coaches and get their participation, and how satisfying is it to see such unification?

I couldn’t be more prouder of our coaches association and the unifying voices we’ve had since the George Floyd incident. It’s the efforts of a lot of people. Doc Rivers has provided great leadership, Rick Carlisle, Quin Snyder, JB Bickerstaff, Dave Fizdale, Stan Van Gundy, it’s been tremendous to see all these guys communicate with each other.

We’ve seen Gregg Popovich and Steve Kerr speak out (in the past) but I think everyone stepped up this time and tried to do what they could in their cities and what we could as coaches. The focus is on committed and sustainable change. It’s something we could be committed to whether we’re in this seat or not.

An NBA champion hasn’t been honoured at the White House in the last four years. How welcome will it be to have that happen again, assuming the pandemic allows for it?

It should be an honour to be a champion, to become a champion, and be celebrated at the highest level in this country which is the president welcoming you into the White House. Because of the divide in politics and the frustration of power, it (hasn’t been) an honour.

Sky Sports’ coverage of the NBA continues on Sky Sports Arena on Monday night as the league marks Martin Luther King Jr. Day – join us for a triple header, starting with Phoenix @ Memphis from 10pm.