The sport’s biggest attraction and most sought-after free agent is on course to remain put for the time being.

Talks continue to progress for a deal which will see four-division and reigning WBA/WBC super middleweight champ Saul ‘Canelo’ Alvarez continue to serve as the centerpiece attraction for DAZN-USA through at least his next two fights, multiple sources have informed BoxingScene.com. The pound-for-pound king and four-division titlist is in talks with promoter Eddie Hearn for a two-fight agreement which would presumably include a super middleweight title unification bout with unbeaten WBO titlist Billy Joe Saunders (30-0, 14KOs) in May. 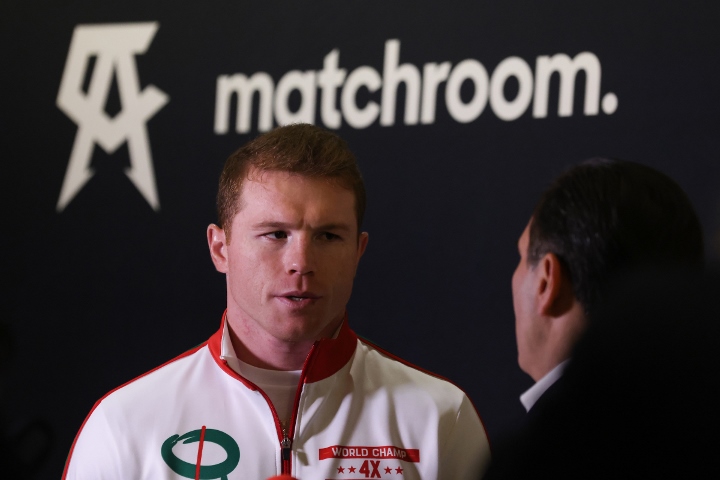 According to The Athletic’s Mike Coppinger, the latter of the two-fight deal would take place May 8, in celebration of the preceding Cinco de Mayo holiday.

Representatives from Canelo Promotions, Matchroom Boxing and DAZN-USA all denied comment to BoxingScene.com as such talks remain ongoing.

Guadalajara’s Alvarez (54-1-2, 36KOs) is due to next fight on Feb. 27 versus Istanbul’s Avni Yildirim (21-2, 12KOs), a mandatory challenger inherited following his 12-round virtual shutout of England’s Callum Smith (27-1, 19KOs) last December in front of a sold-out crowd at Alamodome in San Antonio, Texas. The event saw Alvarez claim the WBA/WBC super middleweight titles, joining ‘Sugar’ Ray Leonard and Thomas Hearns as the only fighters in history to win major titles at 154-, 160-, 168- and 175-pounds.

With the win came the understanding that Yildirim was next in line to challenge for at least the WBC super middleweight title. Alvarez is willing to honor that agreement, parlaying the assignment into an opportunity for a quick ring turnaround. The Feb. 27 title defense will likely land at a venue in Texas, in order to stage such an event with fans in attendance. Hopes of a homecoming headliner in his native Guadalajara were ruled out, as ongoing national COVID restrictions disallow mass gatherings.

Alvarez played to a sold-out, socially distanced crowd of more than 12,000 for his win over Smith, which marked his first fight since severing ties with Golden Boy Promotions after ten years under the promotional banner. The stretch run saw the two sides working through a fractured relationship, as evidenced throughout fight week for Alvarez’s. 11th round knockout of Sergey Kovalev to win a light heavyweight belt last November at MGM Grand Garden Arena in Las Vegas.

Despite their issues, Alvarez was still ready to work with Golden Boy for a planned Cinco de Mayo weekend headliner versus Saunders last May in Las Vegas. Terms were reached but the bout was never formally announced as the initial wave of the ongoing coronavirus pandemic wiped out the sport’s springtime boxing schedule.

Efforts to move forward with his career instead left Alvarez at a place where he was no longer willing to move forward with Golden Boy as his promoter. The global superstar filed a multimillion-dollar lawsuit last September, seeking damages in excess of $280 million—the remaining balance of a record-breaking 11-fight, $365 million pact signed between Alvarez and Golden Boy in Oct. 2018.

Just three fights came of the deal, taking place at three separate weights. Alvarez debuted on DAZN with a 3rd round knockout of England’s Rocky Fielding to win a secondary 168-pound title in Dec. 2018. Alvarez then unified three middleweight belts following a 12-round decision over Daniel Jacobs in their May 2019 headliner at MGM Grand in Las Vegas. The Mexican superstar returned to the same venue six months later, though at the starting point of a damaged relationship with Golden Boy ahead of his aforementioned knockout win over Kovalev.

A finalized deal with Matchroom Boxing will see Hearn involved in five of the past six fights for Alvarez. Hearn promoted Fielding, Jacobs and Smith at the time of their DAZN-aired clashes with Alvarez. Hearn is also the promoter for Saunders, an unbeaten southpaw from Hatfield, England who remains the leading candidate to land a May date with the sport’s leading attraction although such a fight is not yet set in stone.

A similarly structured deal with Fox Sports was sought by Alvarez, which would have seen him face Yildirim and then a title-unification bout with unbeaten IBF champ Caleb Plant (20-0, 12KOs) in May. Plant makes his third defense of the title on Jan. 30, facing mandatory challenger and former titlist Caleb Truax and—with a win—would have been ready to accept such an assignment which would have topped a Fox Sports Pay-Per-View show.

Regardless of network affiliation, Alvarez always intended for Yildirim, Saunders and Plant to serve as his next three opponents. Such a path would satisfy his quest of becoming the undisputed super middleweight champion. The order of when he faces Saunders and Plant will largely depend on the deal he signs, with all expectations pointing to his remaining put with DAZN, the platform he has called home for more than two years.