As Sergey Kovalev attempts to clear his name, Bektemir Melikuziev is now left without a fight.

The planned crossroads showdown between the two is longer in the works, with the entire Jan. 30 show now canceled as confirmed by Golden Boy Promotions on Friday. The event was due to take place at Fantasy Spring Casino in Indio, California, but was placed in jeopardy after Kovalev tested positive for synthetic testosterone—as reported by BoxingScene.com on Thursday.

Further consideration over the development resulted in the California State Athletic Commission (CSAC) refusing to any longer sanction the event under current circumstances.

“Upon learning of Kovalev’s adverse finding, the California State Athletic Commission (CSAC) determined that they must cancel the event,” Golden Boy announced in a statement. “While we are crushed for “The Bully” (Melikuziev), we know that he will nevertheless have a tremendous year in 2021.

“We look forward to our next scheduled boxing event on Feb. 13.” 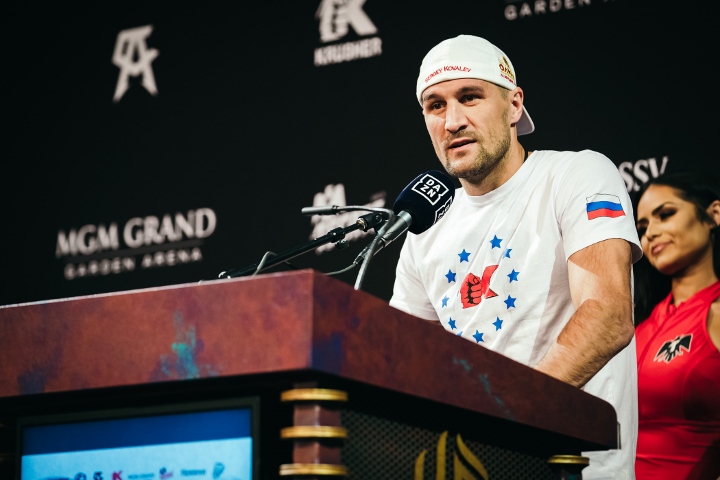 The bout—which was to have taken place at a maximum catchweight of 178-pounds—was relocated from Luzhniki Arena in Moscow to Indio, California earlier in the week. The good news lasted less than 24 hours, before it was learned that Kovalev (34-4-1, 29KOs) came up dirty in a random drug test as conducted through Voluntary Anti-Doping Agency (VADA).

Kovalev—a former three-time light heavyweight titlist—professed his innocence through promoter Main Events, who informed BoxingScene.com of plans to have the “B” Sample tested, as is the right of any drug testing participant. Main Events will also have Kovalev’s training camp supplements tested for potential contamination.

None of it does any good for Melikuziev (6-0, 5KOs), a 2016 Olympic Silver medalist from Uzbekistan who is now left without an opponent and a fight date.

Also gone with the cancellation is a planned middleweight bout between Ireland’s Jason Quigley and second-generation boxer Shane Mosley Jr. which was to have served as the chief support.

No indication has been given as to whether the fight will be relocated, as Golden Boy’s planned Feb. 13 show could be in need of another bout. The main event for that night is in peril, as Shavkat Rakhimov was forced to withdraw from his mandatory title challenge of defending 130-pound titlist Joseph ‘JoJo’ Diaz after testing positive for COVID.