Just like that, it’s been a decade at the top for Gennady Golovkin.

The middleweight division’s Kazakh-born boogeyman fought for his first title belt – a second-tier WBA trinket – exactly 10 years ago this Wednesday, and he isn’t quite ready to cede his status.

In fact, now 38, he’ll celebrate the supremacy milestone Friday by returning to the ring for the first time in 14 months and defending two more straps against unheralded Polish challenger Kamil Szeremeta.

The bout will take place behind closed doors at the Seminole Hard Rock Hotel and Casino in Hollywood, Fla., and it’ll mark the third time the decorated fighter – now in possession of the IBF and IBO 160-pound titles – emerges from the locker room with Kronk-reared trainer Johnathon Banks.

The two got together in the spring of 2019, shortly after Golovkin split with longtime corner boss Abel Sanchez in the aftermath of a majority decision loss to Canelo Alvarez in their second meeting.

The defeat, his first after starting his career 38-0-1, came after a draw with Alvarez a year earlier.

Banks was at the helm for Golovkin’s fourth-round steamrolling of anonymous Canadian stand-in Steve Rolls at Madison Square Garden in June 2019, and was back in midtown Manhattan when his charge returned to the belted class with a narrow decision over Sergiy Derevyanchenko that October.

Plans for a trilogy bout with Alvarez have run hot and cold throughout the subsequent stretch of inactivity, though it’s no coincidence the Mexican will appear 24 hours later this weekend when he challenges for the WBA and WBC 168-pound titles against Callum Smith.

As for Golovkin and Banks, the time away from action has brought them closer.

“If there was a silver lining to be found in Gennady’s ring hiatus it was that he and I had a lot of time together, over six months, training and staying in condition,” Banks said.

“This allowed us to get to know each other better and exchange ideas about boxing and even discuss life. There were days in Big Bear where we would take a hike or go for ice cream.”

It’s the sort of camaraderie in which the trainer, who’s actually two months younger than Golovkin, was immersed during his own fighting career under the tutelage of Emanuel Steward. 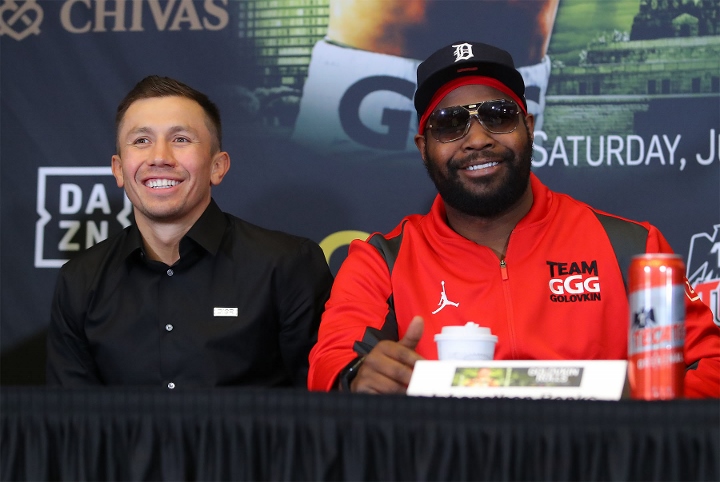 Banks turned pro in 2004 and won his first 19 fights before capturing the IBO cruiserweight title in fight No. 20 in 2008. He relinquished the belt to challenge Tomasz Adamek for the IBF championship the following year and was stopped in the eighth round.

He rebounded with nine wins and a draw in his next 10 fights while trying his luck at heavyweight, including a devastating second-round KO of then-unbeaten prospect Seth Mitchell in 2012.

Mitchell won a decision in a rematch seven months later and Banks was stopped in seven rounds in his final fight, against two-division champ Antonio Tarver in 2013.

He became Wladimir Klitschko’s trainer after Steward died, and has also worked with Dillian Whyte.

Golovkin had been on his radar long before they worked together, dating back to a prolific amateur career in which Golovkin won gold at the 2003 world championships and silver at the 2004 Olympics.

“He was a really good boxer with good movement. He had a beautiful rhythm, boxing and punching,” Banks said. “As his professional career evolved he became known as a knockout artist, stalking his opponent and loading up for the knockout.

“Now don’t get me wrong, I love knockouts, (but) there is more than one way to get one.

“Gennady worked a lot more on his elite style of combining boxing, punching and rhythm in training camp, and he looks tremendous. Rhythm, rhythm, rhythm – speed and power – that is what we worked on a lot in camp. Training Gennady is always an education because he has a good boxing mind.”

And a commitment to the craft as well, which makes the trainer’s job easier.

“He always comes into camp in good shape,” Banks said.

“I think he weighed 168 when we opened this camp. It’s 100 percent training camp, where with other fighters you need to also have to dedicate time to losing a lot of weight. Throughout his career, Gennady has fought at middleweight. (He) is a testament to consistency and discipline. He has been a champion every year since 2010. Who else can say that?”

Not Szeremeta, who’s perfect after 21 fights but hasn’t moved the needle in terms of opposition.

A second-round stoppage of Alessandro Goddi netted him European Boxing Union middleweight honors in 2018 and accounts for his best victory according to the Independent World Boxing Rankings, which had Goddi slotted 44th in the world entering their fight.

Szeremeta, too, last fought on the Golovkin-Derevyanchenko show in October 2019, when he TKO’d Oscar Cortes in two rounds.

“(His) style reminds me a lot of Derevyanchenko. They are almost twins,” Banks said. “Both like to fight close-in. While Derevyanchenko believed he was a puncher and had confidence in his power, Szeremeta moves around the ring more and seems busier.

“(He’s) a dangerous fighter for several reasons. He’s getting better and stronger with each fight. He’s won three of his last five by knockout. He also has nothing to lose and everything to gain. He’s very busy in the ring. I expect him to come right at Gennady like Derevyanchenko did.”

IBF/IBO middleweight titles – Hollywood, Florida
Gennady Golovkin (champion/No. 1 IWBR) vs. Kamil Szeremeta (No. 3 WBA/No. 24 IWBR)
Golovkin (40-1-1, 35 KO): First title defense; Longest inactive stretch (14 months) of his career
Szeremeta (21-0, 5 KO): First title fight; Fourth fight outside of Poland (3-0, 2 KO)
Fitzbitz says: All of a sudden, Golovkin has been fighting in title matches for a decade. He’s 38 now and maybe not the menace he was a couple years back, but more than enough here. Golovkin in 7 (99/1)

Vacant IBO super middleweight title – Hollywood, Florida
Ali Akhmedov (No. 36 IBO/No. 31 IWBR) vs. Carlos Gongora (Unranked IBO/Unranked IWBR)
Akhmedov (16-0, 12 KO): First title fight; Two KO wins in two fights at super middleweight
Gongora (18-0, 13 KO): First title fight; Two of 18 career fights have gone past six rounds
Fitzbitz says: Not familiar with either guy? Wondering how it’s a title match? You’re not alone. But based on records and the tale of the tape, it could be an interesting one. Akhmedov in 6 (60/40)

WBA “world” light flyweight title – Puerto Colombia, Colombia
Carlos Canizales (“world” champion/No. 5 IWBR) vs. Jesus Silvestre (No. 6 WBA/Unranked IWBR)
Why It’s Garbage: Where to begin? We could go with the usual “there’s another guy with a higher-level WBA belt” argument. But how about Silvestre is ranked sixth, even though his last six opponents – since his most recent loss in 2016 – are a whopping 19-30-3, including four with precisely zero wins. Farce.