Heavyweight contender Dillian Whyte is looking to get back in the ring sooner than latter – and he appears to be disinterested in waiting for an extended period of time on Alexander Povetkin.

Whyte was in action back in August, when he was brutally knocked out by Povetkin in the fifth round.

The loss crushed Whyte’s mandatory status under the WBC and also cost him the organization’s interim-title. 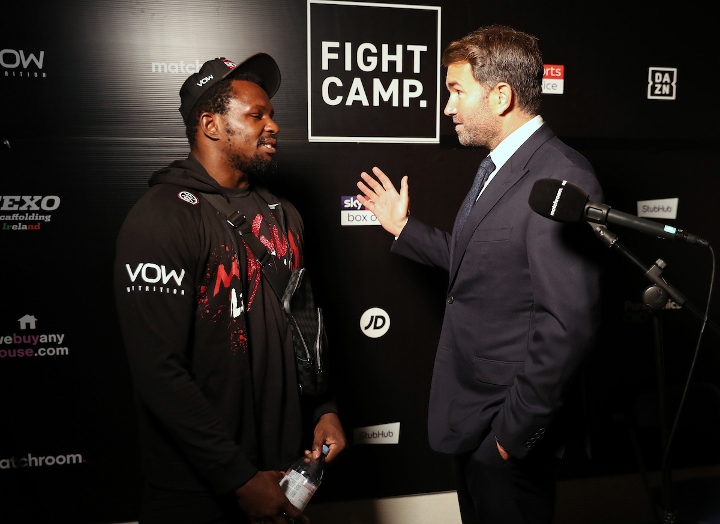 A rematch with Povetkin was scheduled for November 21 – but it was postponed after the Russian boxer was hospitalized with COVID-19.

A new date of January 30th was initially being targeted. That is also off the table – after it was revealed earlier this week that Povetkin was still dealing with the after-effects of COVID and needed more time to recover.

There will be at least a four week delay, according to Whyte’s promoter Eddie Hearn, with late February or early March being the goal.

But, Whyte would prefer to get in the ring sooner.

Some of the names he could potentially face include Luis Ortiz, Deontay Wilder, Andy Ruiz and Derek Chisora.

“We will be reaching out to other players in the heavyweight division to see if they fancy it,” Hearn told Sky Sports News.

“I’d love to make Ruiz Jr vs Whyte, Wilder vs Whyte, Ortiz vs Whyte. Chisora is always ready. He is another name to throw in the mix, potentially, for Whyte if the Povetkin fight is delayed. He is always in excellent fights, always entertaining, he is on good form. But I really feel that Dillian needs to wipe that [defeat] off his record against Povetkin.

“That fight was planned for January 30 and previously November 21. Povetkin does need more time recovering from COVID but not too long. We expect him to have a four-week delay. When I conveyed that news to Whyte it didn’t go down very well! His first question was: ‘Who else can we fight?’ ‘Can we fight Luis Ortiz, Deontay Wilder, Andy Ruiz Jr?’ The answer is: ‘Yes any of those would be fantastic’.

“But he does want, more than anything, to avenge the defeat that he suffered at the hands of Povetkin. That is on his mind. So I said to him: ‘I think you should wait [to fight Povetkin]’.”